In the Statistics/Player stats section the Total Games value is incorrect. It increases by 4 or 5 for every game I play. It also increases for singleplayer games. The biggest puzzle is when I firstly installed the game the value was not 0. Another thing I noticed is the Best Civilization changes to whatever civilization I played with last and after that it goes back to N/A. 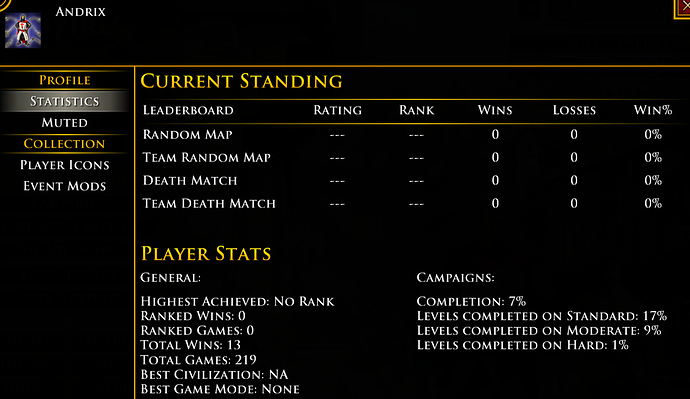 Why this bug haven’t been given any attention? It’s 2 months since it’s been there.

Since the last update, it looks worse, because you can’t see the stats even when joining a multi player unranked lobby.

total games is kinda buggy from the start. It indeed counts for SP also.

I think there are more threads about these issues. Seems like the dev dont really care about these stats at all.

For more reiable stats, you need third parties. That is pretty bad.

Yes, please fix it! I remember once it was fixed like 3-4 months ago but then got buggy again.

I’ve won 876 games and my player stats still show all zeros and No Rank. This bug has been known for some time now and it still has not been addressed. None of the player icons associated with these wins have been unlocked either. Player support is a joke.

same problem. Wasn’t that supposed to be a part of this release?