Since other civs require only 700 resources I think it would be fair that Mongols should only require 700 wood.

700 isn’t fair to other civs and here is why; Mongols will most often (99% of the time) build TC near woodline therefore saving comparatively 50w on lumbercamp; then since mongols does not require 2 resources for TC it means another 50w saved for that second drop-off point plus the walk time. LASTLY and kinda most IMPORTANTLY! All other civs except Rus has to be EXPOSED to treat collecting those 300 stone; meanwhile Mongols is safe under their Main TC…(how much would should that be worth?)

IMO 825w is the lowest they can make it cost

I agree with the op because you are always behind in eco with Mongols and you need wood for every building. It’s easier to get 400 wood and 300 stone in feudal as 900 wood. That’s why you still tower rush as Mongol to slow enemies eco down. In case of that it is a higher risk to go fast 2nd tc as Mongol. You can’t have tc and military that early. Other civs get their tc much quicker and with low. Risk.

and I would like to add to everything you said, that the Mongols do not need to spend wood to make houses

Yes but you are also 1 vill behind at beginning, maybe 2 and u start with 0 wood because u have to build ovo and just start with 150 wood. Not 200 or 250 like other civs.

Also like to add pastures cost 50 wood extra, and also get hardcapped by sheep carcasses if not harvested severly limits your food availability incase your main food production area got compromised and youre forced to relocate.

Due to cascading effect, anything that happens in the early game has a amplified effect in late game.

But in all honesty, its not to much of a big deal.
I mostly play 1tc mongol build anyway and prefer going for trade whenever possible.
Which makes up for slow starting econ.

And when it comes to everything, rather than making TC cheaper, id prefer if they made imp tortchds available in feudal age and decrease the cost of bounty upgrade.

We can’t go complete 1 for 1 on everything… but lets try to compare English to mongols?
150w mongols + ger
200w english

MONGOLS moves to woodline, when possible will place TC on wood and stone or wood and gold (potentially saving another drop off…); but let’s assume it’s just woodline. The TC trek cost you at least 1 vil que. Meanwhile you spend 150w on ovoo, once ovoo up it produces at a rate of 2 villagers on stone. Now you’re on gathered sheep gold and gathering wood for maybe a pasture but definitely 900w for Tc (so maybe 150w pasture + 900w tc again safely).

ENGLISH produces vil from TC asap therefore ahead of mongols by 1 villager…but eventually once mongol ovoo up effectively same number of vils. Englishs needs lumbercamp, mining and house (150w). At some point English needs a stone mining came so another 50w (so far all this they started with); along the way English might setup a farm or so but mainly wants to gather the 400w for TC. HOWEVER, english will need another 50w for a house around the 4min mark and by the 6min mark where English would have enough a TC abd likely need a least 1 more house. (Farms * + mill * + 3 houses min 150w + 700 resources TC).

IGNORING the farms stuff which is unique to ENGLISH, most civs do NOT start with 50w free wood (abbasid needs the extra 50w, delhi needs 50 more free wood; only french technical since their camps are cheaper). Most civs in the same scenario would have spent 850 to 900+ resources to get that 2nd TC on top of the fact it’s not safe.

You are right so far, even if nobody ever will produce 2x vills with stone. And other civs get eco or military advantage in feudal. So English will have a military building in feudal, like French. Abbasids get vills for 25 food in feudal, rus got more food income for bounty and free gold for animals, easy trade 2x stone with landmark, China got the official boost and song, dehli get eco upgrades for free and sacred sides in feudal, hre got prelate and Aachen chapel. Mongol got nothing till castle. So yes you are behind in eco against other civs. I don’t say that Mongol is worse then others over all because u can tower rush easier, but I say u have to do it. Overwise you are behind in eco most of the game.

Mongol’s identity is NOT eco boom, but aggression, raiding, tower rushes, fast castle lancers, mangudai etc etc. One could argue that Mongols have been stripped of their original versatility, however most other civs have 1 or 2 meta builds, 3 if u wanna be cute; This is currently what Mongols do.

So yes all that 2 villagers worth of stone CAN’T optimally be used for eco bonus like you said, but it immediately turns into dark age aggression and/or feudal aggression. Remember Mongols is in the top 3 in win rates still DESPITES getting nerfed like EVERY PATCH?!!
OVERALL 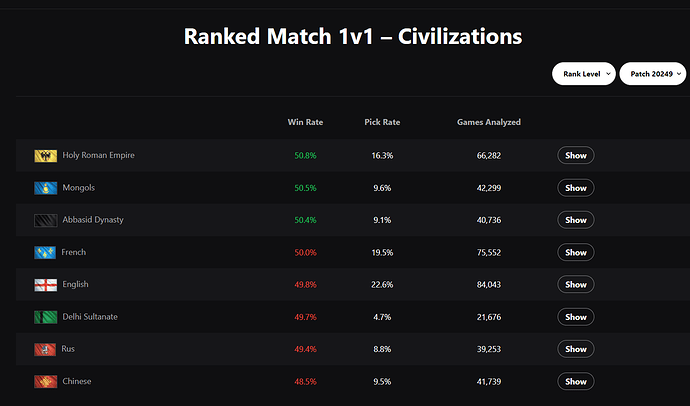 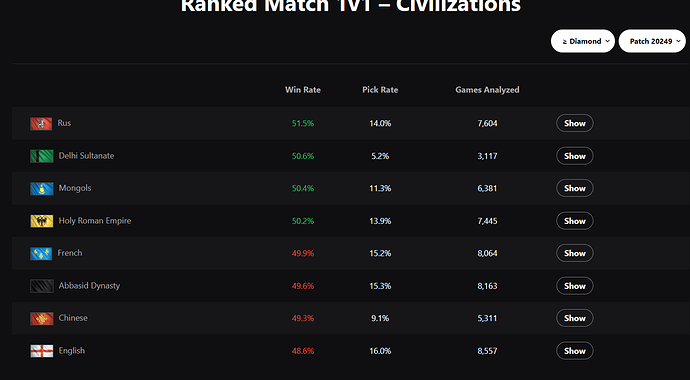 You forgot that… English Town Centers fire twice as many arrows and provide the Network of Castles bonus, increasing the attack speed of nearby units by 25% when enemies are detected.

Lol english TC cost was all the comparison was about! Otherwise i forgot mongol tcs can move?

I also think that 900W is a lot. Perhaps that 900W could be distributed in other resources. Example 700W 200S. At what time does a civi usually have 900W? The Mongol must be aggressive and the towers need wood and pasture too.

You didn’t interact with my supposed reasoning? Other civs need 700 resources where 300 of that is unsafe and requires a drop off at minimum and MAYBE even a tower? Just the dropoffs and 700 res puts you at 800 resources for standard cvis vs the 900 safw wood of mongols?

Just no. Certainly the problem of the LM TC at the start is a problem, but that would ruin mongols.

Considering the civ saves a lot of wood by not making houses and woodline is usually safe under tc 900w is not a bad cost at all for the TC, ram pushing a mongol tc is extremely hard since it can be moved from one location to the other.

Mongols just lack better late game economy, and they will usually get outscaled by other civs because they lack eco bonuses, are vulnerable to raids while other civs will have other eco bonuses going for them in late game to keep them going, like english farms, golden age for abbassid, hre relics, etc.

One option which was given by beastyqt was to increase amount of resources dropped in ger by 5% or something like that per each age up. It would be a much better alternative and it can also be adjusted for balance purposes.

This is why I suggest all of Mongols eco stone upgrades be REVAMPED to be the EXACTLY functional replica of the standard with ONE exception! The stone version will be cheaper and train slightly faster.

Example
Wheelbarrow cost 50w and 150g and takes 90s to que? Alternatively it should cost 75-80% of the standard cost in stone (150-160 stone) and take 60s to que! This will give Mongols a different and efficient avenue to take instead of opening up tower rush EVVVVVERRRRYYY single game; Can get a early wheelbarrow and setup for a decent feudal play or Fast castle with a decent eco behind you at the cost of few free knights!