The game’s code can handle up to 12 players, just like Age of Mythology, since it’s the same engine. The game should be updated to make use of the ‘unused’ player slots and unused colors. At the very least in the scenario editor if not in Skirmishes and Multiplayer.

I don’t know 5v5 and 6v6 can fit maps because some maps aren’t big because like 4v4 is already max north/south/west/east (I mean town center). I think up to 8 players is enough for me.

Also, AoM did with a limit of 12 players just fine in the very same engine. And players have been asking for map size control for a long time already, this would be a good excuse. 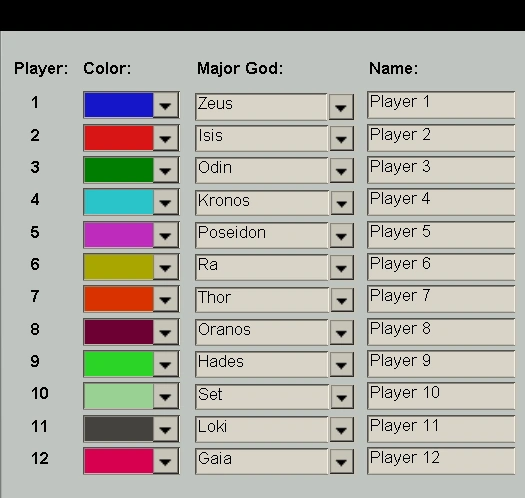 PS: I’m more asking as a mapmaker, I want to be able to use the full 12 player count for mix enemies represented by multiple players of different civs with the same color. It’s very useful.

To be honest, i haven’t played AoM long time ago and i never thought 12 players can fit AoM maps size but AoE3 have problem because i always play teammatch (2v2, 3v3 and 4v4). I see maps size still same and resources too (Tree, Animals, Gold, etc.), Tree isn’t easy for 4v4 because tree always waste quickly on 4v4.
Unless if you use factory from European civs.

Up to 12 players would nice but i don’t think that’s fun for players because AoE3 is fast-paced strategy game. 5v5 and 6v6 make that game longer, might slower.

AoE3 random maps automatically scale with player count. But 4v4 has still less space per player than 2v2 because it’s not 2x as large.
(I don’t know they they are scripted correctly to handle more than 8 players)
Also maps don’t all have the same size.

Also maps don’t all have the same size.

I meant town center and resources.