If the Lithuanians are the representative of both Poland and Lithuania as the Polish Lithuanian commonwealth, why not make Poland as Lithuanians?

It can actually make the difficulty a bit harder as the Leitis counter Teutonic Knights and are cost efficient vs Teuton Paladins.

The Polish were made Slavs in this campaign in DE whereas Polish in Ivaylo final mission are Lithuanians. Previously Polish were Goths in this mission.

I am revisiting the campaigns so I have noted that Fredrick Barbarossa Mission 1 now has Burgandians (previously Franks) and was updated in DE to have Cumans (player 8; previously Mongols).

Hmmm…historically speaking, while you do make a solid point that the Lithuanian civ does represent the medieval Poles (both culturally and politically via the Poland-Lithuanian Union) , one can argue that the Leitis units are not really a “Polish” unit, and also: it would anachronistic to have Leitis appear in the Barbarossa Mission 2 campaign, simply because the Leitis as a historical military unit did not appear until the late 14th century during the Lithuanian-Teutonic Knight Wars.

Gameplay-wise however, I see that your suggestion holds a stronger argument, because I for one think that Barbarossa Mission 2 is ridiculously too easy (even in DE, with the change of Poland from Goths-civ to Slavs-civ). However, instead of civ-changing Poland, it would perhaps be better to just simply buff the Poland AI by giving them more military buildings to train from, like Archery Ranges and Stables, and also make thier river boat fleet more menacing at the crossings.

Because this was before the union + Poland is required separate to Lithuania because both were important.

It’s ok soon they will be replaced with Poles

Actually you cannot say that it has to be an infantry civ. When it was Goths, the AI produced Huskarls (the UU), which to be fair is also produced from Barracks, siege and Pikemen (cheaper).

When switched to Slavs, the AI produces Boyars (the UU), Siege (cheaper) and Pikemen.

If I suggest for Lithuanians, the UU will be produced. Siege and Pikemen are pretty standard for Lithuanians in Castle Age. The Lithuanian Pikemen also have a bonus, the effect of which is highly magnified against Teutons.

The Goth Infantry and Slav siege were basically the same as everyone else’s but cheaper. This can be achieved by giving more resources to AI. The Slav infantry, Goth Siege, Lithuanian siege is nothing special in Castle Age

The only change which is permanent is that in HD, Goths had +1 attack bonus against buildings in addition to Arson, which has changed due to balance in DE. As per the current balance, it is basically free Arson.

And you don’t think the ai producing a unique unit that ignores armor isn’t going to cause issues for a civ that Is all about high armor?

I won’t argue if Poles in second mission of Barbarossa Campaign should be Lithuanians or Slavs but:

one can argue that the Leitis units are not really a “Polish” unit, and also

Boyar has absolutely nothing to do with Poland. Same as Leitis. They are both not really a “Polish” unit. But It’s only because of name of unit “Leitis” and coat of arms on his shield and tunic. Otherwise Leitis looks just common knight in medieval from eastern Poland.

it would anachronistic to have Leitis appear in the Barbarossa Mission 2 campaign, simply because the Leitis as a historical military unit did not appear until the late 14th century during the Lithuanian-Teutonic Knight Wars.

Just small note: developers replaced Huskarls with Leitis in 5th Mongol Campaign. And in El Cid campaign player have access to a mounted soldier with arquebus, so I don’t think developers really care about “something” anachronistic in the campaign. 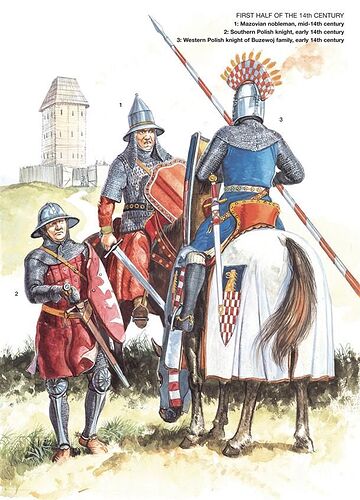 Just small note: developers replaced Huskarls with Leitis in 5th Mongol Campaign. And in El Cid campaign player have access to a mounted soldier with arquebus, so I don’t think developers really care about “something” anachronistic in the campaign.

True…but that is because the the old devs who created Age of Kings and Age of Conquerors were less-caring about historical accuracy than the new devs for Definitive Edition. Many of the new campaigsn reflect more “historical accuracy”.

Some examples of the current devs being more caring about historical accuracy: Edward Longshanks campaign: you are not allowed to build cannon galleons (gunpowder weapons were not developed enough to be small enough to be loaded on ships at that time).
The remade Richard the Lionheart Cyprus campaign prevents no training of cannon galleons too.

Admittedly, and you are right, the devs have sacrificed some historical accuracy so as to make the gameplay amicable and fun. Barbarossa Mission 4 for instance only saw the Italian city state of Padua be changed to Italians civ, while Verona and Venice remain the same civs as they were originally (the DE devs felt that making them all Italians makes that mission too boring).
The El Cid campaign, when it was first contrived, was meant to advertise the Spanish civ back when it was brand new in AoC. That is why gunpowder units are permitted, as they are the civs best selling points.

So I completely understand on a gameplay level that the devs have–and must–sacrifice some historical accuracy in order to make a enjoyable and pleasant gaming experience.

However, my stance on this matter of Mission 2 Barbarossa is me questioning what would there be to gain from changing the Poland civ from Slavs to Lithuanians?

It was the Lithuanians, not the Poles, who were excellent skirmishers and make much use of the spear and javelin. Hence why the Lithuanian civ has faster moving Spearmen and Skirmishers, and has a unique Imperial Age tech, Tower Shields, to benefit them.

Moreover, the Poles are actually classified as West Slavs in ethnic terms. So for the AI player “Poland” to be designated “Slavs” is not a total lie. The Lithuanian peoples are not essentially Slavic to begin with: they are a Proto-Baltic people. If you make the Poland AI into Lithuanians, you might very well be offending any Polish players in AoE2 by representing Poland as Lithuania.
Yes…Poland and Lithuania did enter into a personal union to fight together against the Teutonic Knights and other common enemies…but the Lithuanians were not entirely satisfied with the arrangement and how the Poles were “polonizing” the Lithuanian peoples. (It really was a thing: you can look it up Polonization - Wikipedia

While, technically yes you are right that the Boyar is more of a East Slavic unit, i.e. Russian and not much of a West Slavic i.e. Polish unit, it is true that the Poles and the Russians did share a similar aristocracy set up in their respective regions with “Boyar” being a term used somewhat in medieval Poland’s most eastern regions.

But the best reason for why Poland should remain under the Slavic tech tree is because ethnically, it is more correct.

Yes, that’s what exactly I am aiming for. To increase the difficulty. I clearly said that in the original post.

Barbarossa Mission 4 for instance only saw the Italian city state of Padua be changed to Italians civ, while Verona and Venice remain the same civs as they were originally (the DE devs felt that making them all Italians makes that mission too boring).

Yup, I noticed that too. And I thought the same. Maybe it is time to make one of them Sicilians now.

I would like the Frank one to be changed.

HRE was derived from Franks. So Franks fighting new Franks isn’t good (except Henry the Lion).

The Byzantines also control the water, which actually makes it harder. So replacing Byz with Sicilians is also not what I want to see.

It’s ok soon they will be replaced with Poles

Doubtful, but it could happen. After all, the devs did squeeze Burgundians out of the Franks.

Personally, I find it very hard to imagine what a specific “Poles civ” would be like in Age of Empires 2, especially if you consider that so many other civs already represent the Poles in many ways: Magyars have cheaper normal Hussars, and the Magyar Huzsar is literally the spitting image of a Polish Winged Hussar. The Lithuanian civ’s Paladins with their Relic Bonus attributes to Poland’s Catholic piety and tendency for heavy cavalry.

But hey…the devs managed to surprise us all with taking the Burgundians out of the Franks and Sicilian (Normans) out of the Italians (and the Franks).

You know what. This is a scenario. And there is nothing stopping us from creating a custom civ here.

Internally make the civ as Slavs (cheaper siege and housing space). Rename it as Poland.

Replace towers and castles with Kreposts. Give access to Huszars, Boyars and Leitis at the Kreposts. Hence 3 unique units.

Castle Age UT of both Lithuanians and Slavs is useless in this scenario. The Goth one is useful.

Poland is stuck in Castle Age, so nothing much.

Increase the speed of pike units by 10% (for the infantry part). Pikes are already too cheap so the Goth discount is not what I enjoy.

HRE was derived from Franks.

In other words, back in Charlemagne’s day, the “Franks” were a people that were the ancestors of both the French and the Germans (and to a lesser extend, the Burgundians), but they split. It was the Kings of the East Frankia kingdom, that became “Kings of Germany” and eventually laid claim as “Holy Roman Emperors”, hence why Frederick Barbarossa, of the Hohenstaufen dynasty, became the HRE in the 1100s.
By his time, the French (represented by the civ “Franks”) and the Germans (represented by the civ “Teutons”) had sizable differences between each other.

Replace towers and castles with Kreposts. Give access to Huszars, Boyars and Leitis at the Kreposts. Hence 3 unique units.

The developers lately have been making scenarios where you make the AI unit (or even the human player) have buildings of a civ different from the civ you play as. So one could add Kreposts in the Mission 2 Barbarossa campaign.

This is different from what you said.

The building Krepost can be given to any civ via the scenario editor. The graphics of Krepost is locked to be Slavic, since no other graphic exists. This existed long back but was only noticeable with unique buildings. The most well known example is giving houses to Huns and the 2nd most one is giving Feitorias to any other civ.

What the developers are doing is giving architecture set (say of Indians) to another civ (say Franks). This also is now achievable by scenario editor (new addition in DE)!

Giving any if the south east asian civilizations the indian building would instantly make a new indian civi.

And cannons and conquistadors with guns in El Cid campaign make any sense? There are lot of campaigns where there should be no imperial age option because units there did not exist jet.

In most campaigns the Polish are represented as the Slavs because it’s the most straightforward choice.
They are Lithuanian in the last Ivaylo mission because they wanted to show of the new civs, and to avoid not having Lithuanian ever seen in any campaign at all.

Personally, I find it very hard to imagine what a specific “Poles civ” would be like in Age of Empires 2

It’s gonna be hard, indeed. But not everything about the civ must be grounded in history. We can come up with some creative cavalry and monk bonuses, let’s say 2 or 3, and then a single UT based on historical facts, and then fill the rest of the civ with elements purely focused on gameplay.

And that’s it. Those are the polish historical elements. The rest can be filled with generic eco and military bonus, and maybe some healthy minor gimmick like the ones the new civs have but not so crazy.

Edit: Forgot to mention that they would not have acces to paladin because of such a strong bonus for knights.