[POLL] Details for units in buildings and units mechanics

Before I get started, I want to say that what I’m going to talk about and show I know it’s mere aesthetical and doesn’t affect gameplay at all.

Said this, let’s get started, shall we?

As a person who loves details in every aspect of every game, I would love to see all these kinds of features.
Let’s start with adding people to the buildings. Check the pictures below: 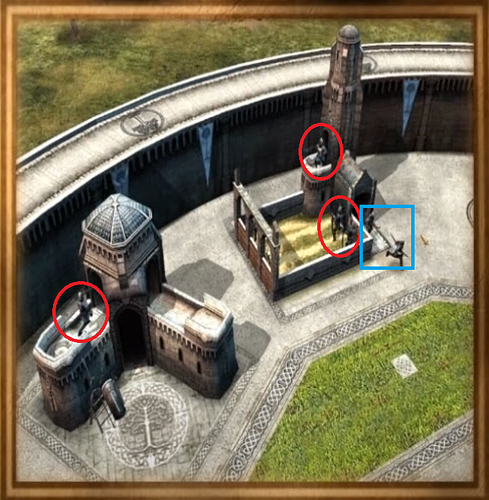 Look how the guard patrol in the barracks, and there even is an archer captain in the archery range, which shows archers training when you are producing units. You can also see archers coming out from the building (THIS IS A PROPER SCALE BUILDING SIZE).

Also, in this game (is Battle for Middle Earth from 2004 in case you ask) buildings gain some sort of veterancy when you produce units over the time, changing their aspect too (see below) 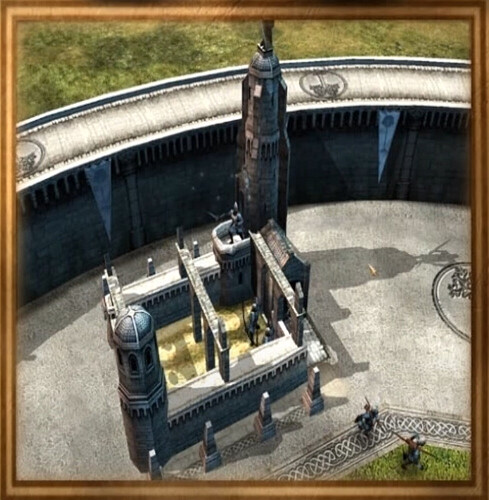 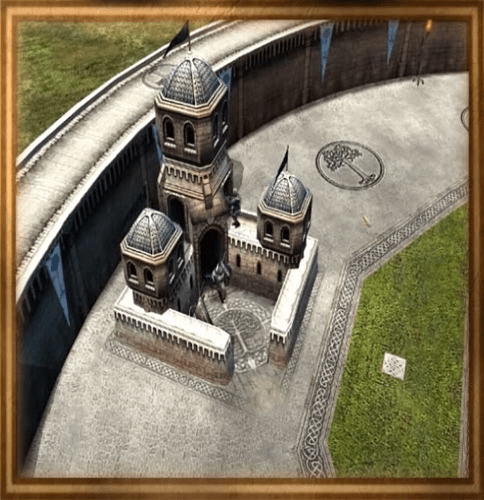 Here is another thing that I would love to see. Look how much space this Castle have to add some archers here. It would be really awesome to see them there firing arrows and defending the castle instead of seeing multiple arrows coming from nowhere from the castle. 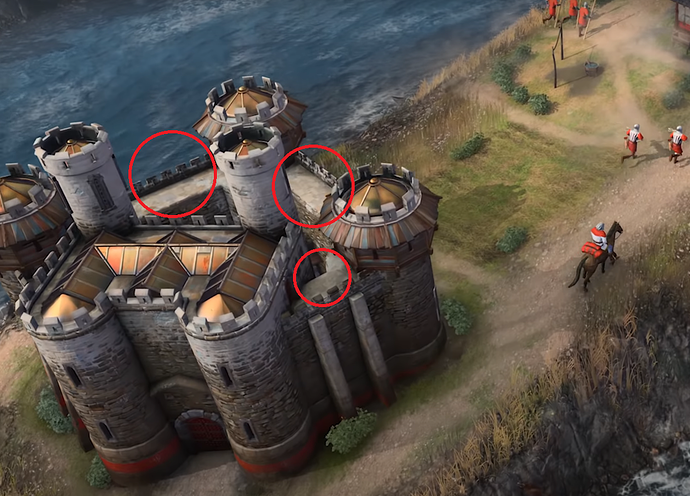 This one I know a lot of people have been asking for in other places but welp, why not put it in here too.
Let’s add some crew to manage siege weapons, look how cool it looks and how simple like this it is

And last but not least, charge ability for Cavalry. I know there are some units like the Royal Knight from the Franks that have this feature but I’m not sure how it works.
In my opinion, should be like this one in which infantry units get knocked up while colliding with horses (and this slows down cavalry movement speed)
When colliding with a pikeman, the movement speed was extremely slowed down and cavalry gets really hurt. Also, just a few units get knocked. 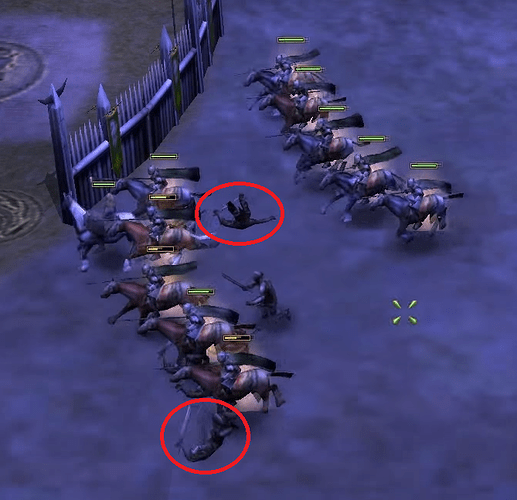 THIS IS A PROPER SCALE BUILDING SIZE

These buildings are so tiny that only 2 or 3 people can fit inside. They may be scaled, but the sizes are still ridiculous.

Id like to say it looks quite similar to what we have now, at least from some perspectives. Its funny though that in this shot aswell, between the 2 buildings you see how they are NOT fitting in scale at all

Yes, the buildings in the picture may need a tweek here and there, but at least we can see units comming out from there instead of just poping up magically.
I’m my opinion I rather having that, than foot units being taller than the doors in the buildings. And watching soldiers training inside it adds some extra flavour to it.

Adding normal sized units to miniature buildings would look even more ridiculous. Why would you even think it is good idea? (Its like Wonka factory or something)

The point is increase buildings size so actual units can fit in it.
Even that they tweeked scale a bit, buildings aren’t big enough yet

If we can have this, even if is custom made… why can’t we have it in Age IV too as a normal thing? It’s much more cool and realistic than just merely watching some random arrows being fired from the stone walls of a castle…

I wouldnt call that realistic tbh - the archers are TRICE the height of the cins. (Also showing that age 2 didnt have realisic proportions).
Thats pprobably why there were and are no units on buliding or ships. They would be faaar too large. On sige they may fit though

Maybe not realistic in size proportions but in attack animation at least.
Still, I believe if they increase buildings size 15% more they could fit perfectly (speaking of Age IV)

I am sure the animations there also dont fit bow and arrows, as that was the case in age 2. but of course on a castle it would be fitting that SOME archers would be atop.

However the proportions is precisely why taht wont happen, aswell as no units on ships. You woul d have to shrink the units to fit proportionally, which would kill the ability to emphatise and be in the game.

Yes, regarding age 4, I agree another small increase in building size would fit better, BUT

On the other hand, about size and proportions, there is also this 2007 game Ancient Wars Sparta which have a crew in everything, walls, ships, siege weapons, etc. It was fun to play, you could choose between Greece, Egypt, and Persia. You could even pick up the weapons that the soldiers left on the battleground after dying, no matter if was from your soldiers or enemy… 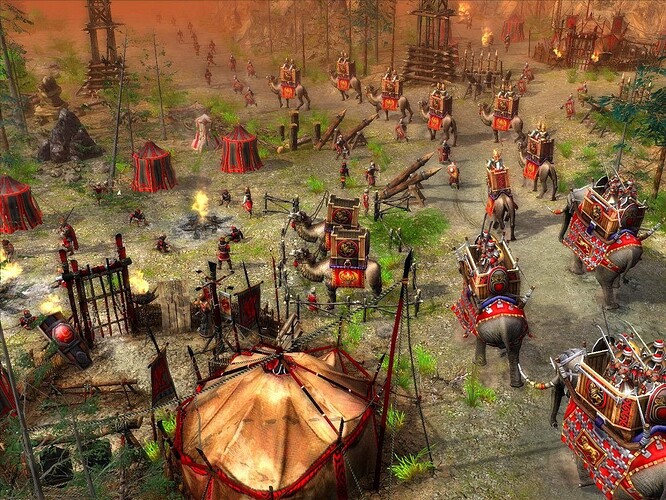 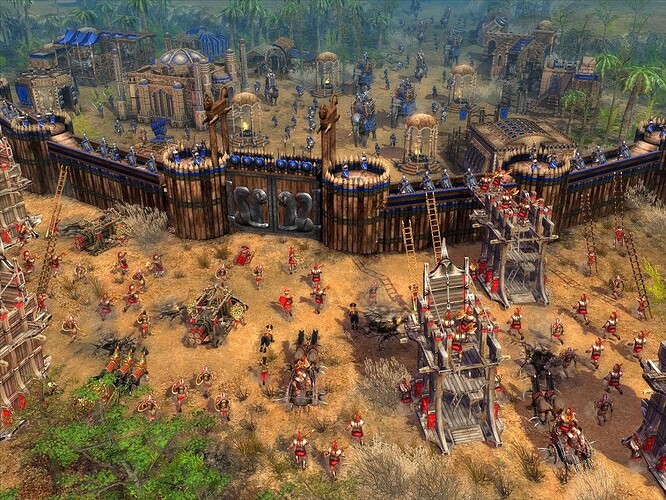 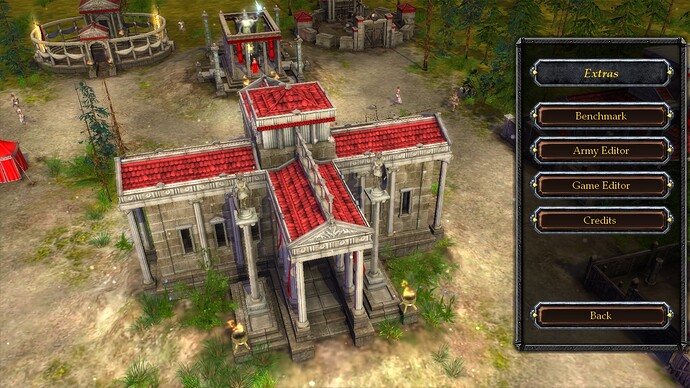 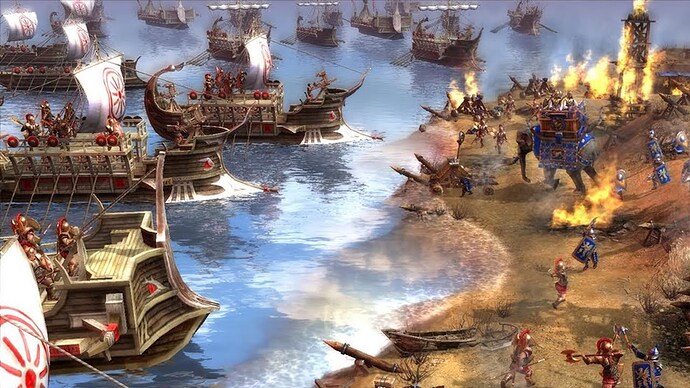 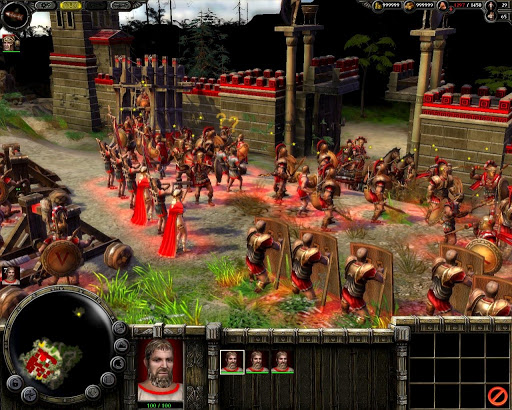 Look at the size of those buildings! That’s a proper scale

It is. And it works becaus eof this. But then I look at the units and see a very cluttery picture. I honestly wouldnt want to play with units these realistic sizes, its harder to have an overview imo. See the siege of the blue town for that.

Interestingly in one shot the units look huge in comparison, with the minimap and the red wall and units. I assume thats played far zoomed in?
I wouldnt want to play that well too, there is too few overview.
Thats why I like current age 4 graphics, although buildings COULD be a bit larger.not as much as there though, I still want ti see my units

assuming I can change the zoom level though, the game looks quite need… maybe an In between RTS. but first I will have to play C+C remaster as I never got to play that in original form^^

I think instead of having units always positioned on a building there just needs to be more unit and building interactions. Really all they do now is gather from, and train from. or get buffed by and that is the only relationship. But they could man those positions by placing own units on them like they do for walls now.

What do you think about larger buildings with more unit maneuverability? Like military units can walk through barracks, all units except cavalry can walk through the market and other economic buildings. So with the larger foot print gives some more path finding options and defensive edge as enemy units will have to travel around or destroy the building while you can dodge through the center of it. A small amount of archers or other units to try to stay protected could even garrison in the court yards of the barracks giving them a small corral of safety from melee units, while still being vulnerable to archers.

(note they would have to access through doors and not any 360degree arc when touching the building. so for some building foot prints might only have 2 access points, others 4 etc… )

As well as seeing units get trampled I think elephants should have a chance to grab a unit and throw it killing it.

Crew on siege is almost a must… PLEASE work the midnight shifts to get it done.

But I assume that it will, and maybe units on buildings will later be possible in Age V. who knows.

I dont think the siege operators are a thing that needs work, I think its a design choice they made and wont change. And I am ok with that, but also wouldnt mind if they had operators. or the golden ppl. I like these

On the other hand, about size and proportions, there is also this 2007 game Ancient Wars Sparta which have a crew in everything, walls, ships, siege weapons, etc. It was fun to play, you could choose between Greece, Egypt, and Persia.

It’s just a pity that the game tried to be a copy of WarCraft and, as a result, no one needed it, it was not suitable for network battles, it had very non-dynamic and slow-flowing battles between units and of course the blur, oh my God, how bad the landscape looked, the game was absolutely not similar to the staged screenshots from the promo you show, the whole game looked very blurry, especially if there is a lot of greenery on the map.

Not showing it because it looked great or the playability was spectacular, I just posted it because of the concept of giving a crew to siege towers, even ships (what made the ship kind of huge), and also buildings size.

Of course, if we made Age IV like this, it would stop being an Age game, but, still, some things can be done without breaking the harmony of the game.

I refuse to believe that adding 2 or 3 archers at the top walls of a castle is worse than watching arrows coming out from the walls (and let’s hope this time arrows have a proper size in proportion to a castle).
Same for adding crew to siege weapons or even 1 or 2 people working on some buildings in an eternal loop. Just for the pleasure of the eye, no harm to playability is needed.

rators are a thing that needs work, I think its a design choice they made and wont change. And I am ok with that, but also wouldn’t mind if they had operators. or the golden ppl. I like these

In a recent pole on another thread showed 73% wanted siege operators (maybe not trebs, but it would still be cool) there is likely a large remainder like you that is pretty indifferent to the outcome. and maybe only a very small fraction of a fraction that actually WANT none or golden flashes (PLEASE NO JUST LEAVE THEM BE OPERATORLESS, I want less flashy stuff and unreal special effects in a medieval game)

So I would say it is something that should be a top priority to support fans.

Its ok for arrows to come out of castles because they do have arrow loops and archers are inside, but yes they would be on the roof too.

last time i checked the numbers were around 50%50 there…