Starting with August balance update and further balance changes, Ports and Ethiopia, Hausa have been moved to rather a point which is out of competitive line. Although months have passed, no progress has been made about these civs. And there are almost no players who actively play these 3 civilizations. Hopefully there will be change about these civs in the future patches so that they will be in competitive line again.

I think ports are fine and also ethiopia but for hausa removing the 3v age 1 shipment was the final nail in the coffin for me and when I stopped playing them.

I think ports are fine

Does anyone rush with ports? Lol that’s far from their only strat that would be 1 of their rarely used strats typically they do a 10/10 ATP, if it’s water they do their unstoppable boom and if it’s a non-tp map they might do a rush or I see a lot of them sending the sheep pen age 1 and doing an FI to Peru revolt. 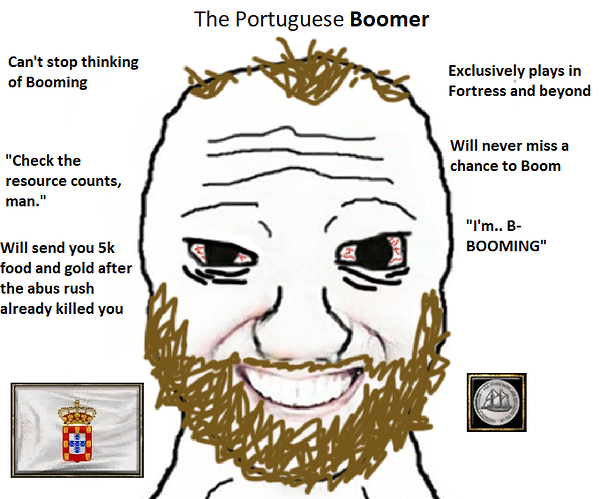 If you looked at the cards you would realize its fortress age rush with mameluks.

Is there such a thing as a fortress age ‘rush’ lol. You mean a FF then? Many civs do a FF and it’s understandable why port would do that, they have a slow early game eco with no villager shipments and it takes a while for their extra villagers to pay off, typically when they’re in fortress age and have access to their better units like the cassador and dragoon.

And that’s it. Portugal is just Dragoons and Cassadors. It has very few viable strategies, not the easiest faction to learn, hence no one plays them.
Fast fortress, fortress rush, whatever the lingo is.
Having a civ that is in a " comfort" spot and its probably one of the less played is not fine in my opinion.

In competitive level, ports are generally performing weak, as ethiopia and hausa don’t aswell. Ports are mainly struggling from questionable nerfs that not the player base demanded nor asked, and about african civs, they were performing more than any civ but currently they are in a spot where they are not close to be useful at all. In this case, ports and africa civs are standing in a spot where it’s rather hard to call it competitive unfortunately.

Really? I thought most people still consider Ethiopia OP? I never really enjoyed Ethiopia so haven’t played them much since AR release.
Hausa definitely feel weak and I got them up to level 100 HC just doing 1v1 ranked, the removal of 3v was so painful and has slowed their eco so much.
What did they nerf for portugal? I think they get less xp from tc’s being built and I know CM got nerfed.

Unfortunately these 3 civs are not getting any better, Ports are in an unplayable spot since 5 months, after getting effected by multiple questionable nerfs which were not demanded by the player base on the official forums.

Main issue is patch changes are far from being transparent meanwhile some certain players brag about how they are in a secret forgotten empires balance discord where they can influence the changes they want.

Rework some shipments, add cannoners in church/shipment, give it a bit of variety, they have some of the most boring and static decks, yes, tp / sea / Peru Rev … not more

Hausa is ok i feel, the early game definitely needs figuring out without the 3 vils but the livestock bonus and potential to just take all the tps still still makes them somewhat potent

Maybe it would be nice to return the 3 vills hausas.

Agree, removing 3 vills wasn’t demanded or required at first place, it made hausa to be a much slower civ compared to others, ethiopia also needs to be reworked

Changing the starting crates of ports where they get encouraged to market start instead of going 10/10 could be beneficial both for balance of the game, and would also make ports borderline playable on land maps, which is not the case at the moment.

Main intention should be to encourage 13-14 villager age ups, so that a start such as 300 food, 100 wood and 100 gold would make 10/10 less viable, as tp start gives a significant tempo to ports on water maps and without it, it would be less impactful to go for that.

Even though new patch has many interesting changes, it’s unfortunate to not have anything or news regarding these 3 civilizations, hopefully something will be made about them in the near future.

i mean news wont come before the actual patch launches with actual official blog, atm its simply just a test.