Before you click away out of disinterest, understand that this opens a lot of options for map makers and also scripters. With this feature, the power of triggers and scenario’s in general will be combined with the element of randomness.

So what does that mean?
Random maps are, like the name says, randomly generated maps. This is, as you all know, the core of Age of Empires.
Now on the other hand, there are scenarios. Static maps that can have triggers and diplo settings that result in new possibilities. Creating new gamemodes, minigames and other amazing creations.

How does this feature change this?
Well, it’s not perfect. BUT, it’s relatively simple. If there is a way to generate these random maps using command line, we can add triggers to them using other tools (Example: AoE2ScenarioParser) - I’ll have to add that I made that parser so there is some bias here). But the point is, when combining these tools, the possibility for randomly generated minigames and other scenarios opens up.

Example of it’s possibilities
In the HD (2013) version I made a map about defending a monument against an AI. This map was a scenario. It had a lot of triggers. It was quite fun but the map was static. A big thing I’d have loved to add was a random map. So the monument in the center, players close around it and the rest of the map different each time. This would have increased the replayability by… Well… A LOT.

Another option is KOTH + Regicide! This was an option in Voobly, but cannot be played in DE. It’s possible to recreate both of these gamemodes with triggers but then you have the same problem. The map would always be the same. It would be amazing if the map would be random together with the KOTH + Regicide! This feature would make this and a lot of other cool stuff possible.

How can you help?

If you like the sound of all what is mentioned above, like this and maybe share it to give it even more attention! If you have any questions, remarks or anything else, please feel free to post it below!

How would it work? (Technically)

I’ve talked about this subject with many technical people in the community before. And this has also been discussed with one of the developers of the game. (No mention untill approved by said person).

It’d be command line based. It’d have arguments like:

The output could be almost anything. I’m not sure how the game communicates it at the moment, but anything from JSON to any custom structure would work. We’ll work with it

An even better solution would be the option to integrate rms scripts into a scenario. I’d expect it to look something like: 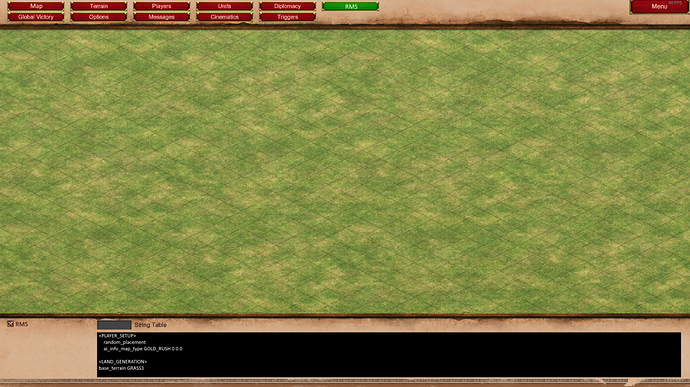 This would change the way scenario’s are loaded and probably generated as scenarios do not have a seed etc. But obviously this would be the ultimate goal. So, eventually I hope this could be a feature. Until that time, command line generation of random map scripts would be amazing to have!

This is an amazing idea! its bringing scenarios and random maps together! its the fated union of both realms!

This could indeed bring a lot of possibilities with more replay value.

To be sure, the idea would be to run the command line and then applying AoE2ScenarioParser on the output ?

If there is a way to generate these random maps using command line, we can add triggers to them using other tools (Example: AoE2ScenarioParser) - I’ll have to add that I made that parser so there is some bias here).

Thanks a lot for the AoE2ScenarioParser tool! Without it, I think I could not have designed my first (and only for now

) scenario (see here for the code and the result).

That’s really cool to see!
I had no idea there even was a thread about the parser.
Also, amazing map with the walls and available tiles! Really awesome! Must have taken A LOT of triggers!

And yeah, that’d be the idea! It’d be even better if it was integrated but I don’t see that happenning anytime soon. As that’d probably take a lot of development time. So just with command line, would already be amazing!

Hello,
I don’t like selling my own stuff, but I am developping a tool that allow generation/editing of RMS. This app can return you fully legal .rms files and modify them along the way. It is callable from the command line, so with some work, I should make it able to take more command line options to achieve what you need. You can see the project and test the app on GitHub there : https://github.com/Givrecoeur/RMS-Assistant. Do not hesitate to contact me if you want to discuss this a bit more precisly so we are sure we understand each other !

Are you saying you can use your application to generate a map based on an rms? If so, can you explain how your program is used. I’m not too familiar with C#

The application can import any .rms file (or just start from nothing) and then edit it (adding random structures, conditions, new commands, properties, anything that you would be able to do by modifying the file directly with a text editor) and then save it in the same file, in another one, or even send it anywhere you’d like. Currently it is mostly interface-based, but the code would make it easy (with some development along the way) to use it in another context, such as a full command line app.
In the GitHub repository, you can go in the “release” page, then under the “assets” section there will be a .exe that you can download to see what it looks like (or you can just watch the little presentation there !)

In the GitHub repository, you can go in the “release” page

I can’t find it. Can you give URL?

I might be missing something but as far as I can see this is not at all what I described in this post. I’m requesting the possibility to generate a random map outside of the game. I want the actual generated map. If this is possible please let me know, I couldn’t find it in your program.

It looks very nice for rms development, but that’s not at all what I was searching for

Oh yeah right, i did not understand you fully indeed. That is indeed a completly different need. I’ll look into it, see if I can find something ! I’m sorry if I gave you false hope with my answers…

That’s really cool to see!
I had no idea there even was a thread about the parser.
Also, amazing map with the walls and available tiles! Really awesome! Must have taken A LOT of triggers!

The scenario is made of 2537 triggers, I think that more than 90% of them are automatically generated using your parser… just for the walls and the available tiles (the remaining are handcrafted for the rest of the scenario).

Are there any tools similar as AoKTS for AoE2DE editor?

I used an earlier version of it in a scenario if you want an hacked-together example: https://github.com/twestura/Micro-Wars

In the thread, you can see that T-West is also using your parser

In the thread, you can see that T-West is also using your parser

Well, I was aware of that part

. Have had a lot of contact with him about the parser. Even had a call about it some time ago now! Amazing dude