Preparation for Ranked Lobbies? Player Status? I found something interesting in the game files

Crosspost from my Reddit Post
I was working on my mod when I had an Error, that the data mod could not be loaded. I ignored it only to think about it again later, I wanted to know the complete Error message and where it’s stored.

Just out of fun I wanted to know if that Error message is located in the Game File, where every String, every Sentence, every Unit name is stored.

This file (everyone has) should be in this path:

So i hit CTRL+F and searched for it, and look what I found instead: 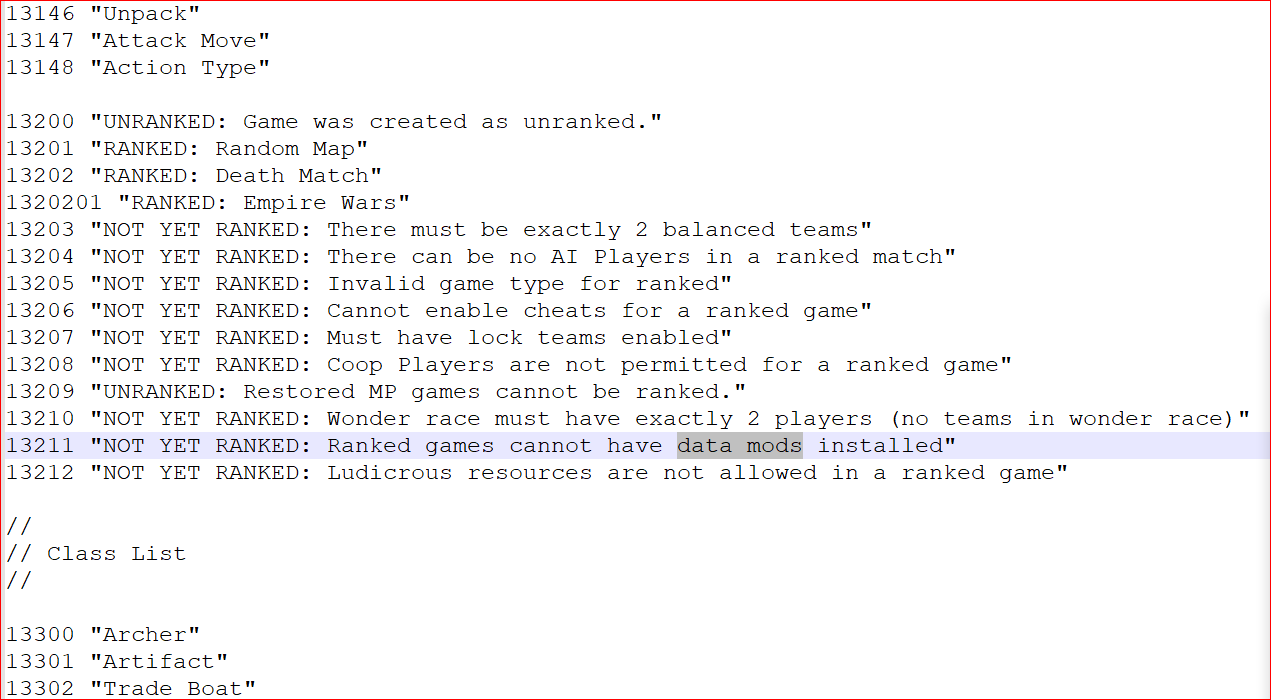 I have no clue when this was added, but given how this is one of the last strings before other sections, i would suggest that this was added recently

So i was fully convinced I found something huge, which will be in the next update, so i searched for “Unranked”, and found pretty… convincing, sentences that support my thoughts:

So I kept on Digging

Well hope this has a time limit

So this is interesting “New DLC4 Strings”… hmmm

When we had “The Last Khans” on DE launch,

and the second was Lord of the West

and the third being… Dawn of the Dukes

Anyway I found some other strings which I haven’t seen yet (at least they don’t show up when applying current filters in the unranked lobby) - Filters, which we currently don’t have

And what is this? Friend/Player status? This isn’t a Steam thing right? 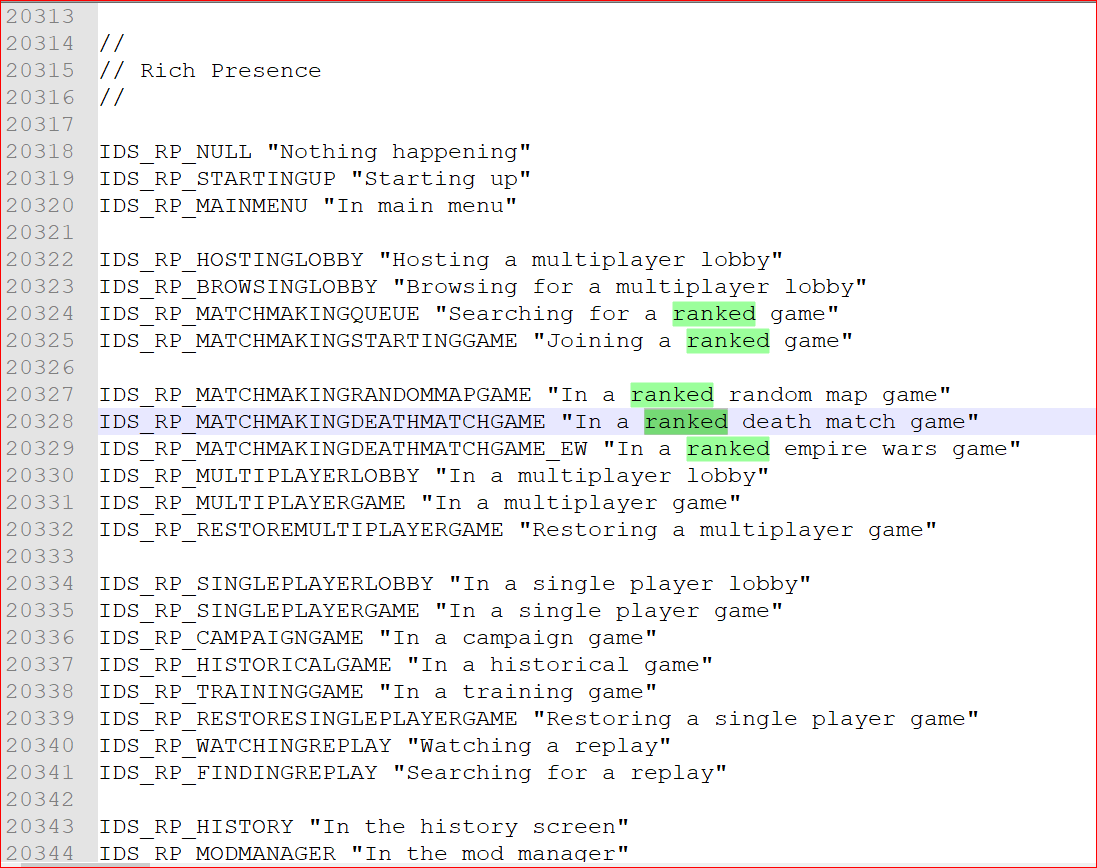 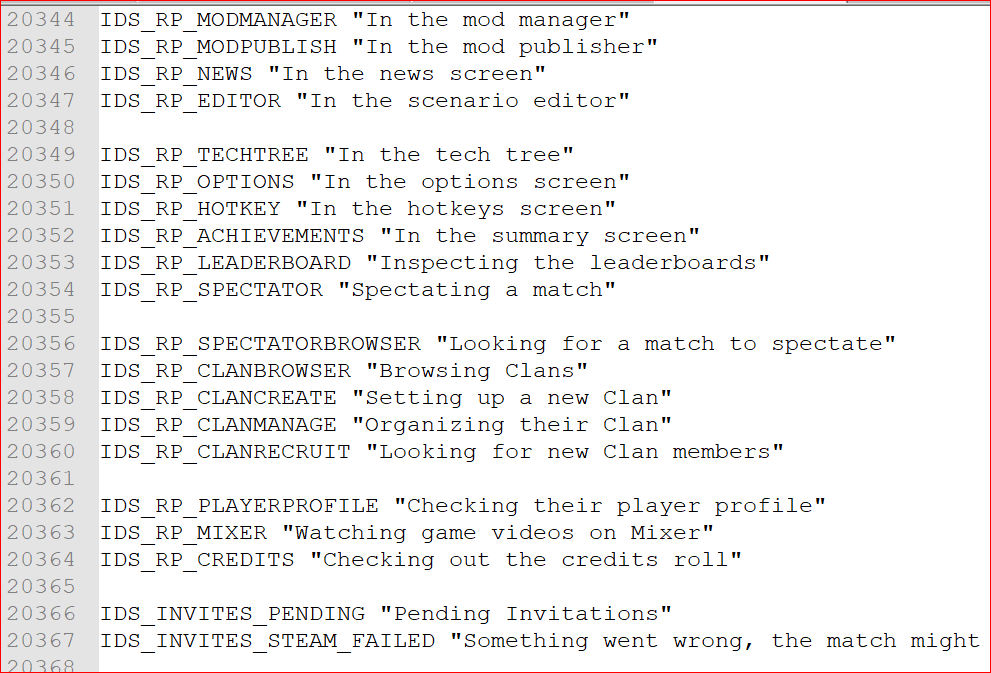 I also found some other stuff that I don’t know is new or not, at the line 20081 “Creating Lan Server”. Overall I am not sure whether the last few screenshots are new - but you can always tell me in the comments + I personally haven’t seen them yet

Not sure if this is fake?

If you want to see it for yourself, open the .txt in the path I mentioned above and see if you can find some new stuff

I think is just the remaining strings of the HD game.
In the same file you find the strings of The Last Khans expansion for the HD game

Well a lot of those strings contain DE stuff like the whole Empire Wars stuff. It is also within DE stuff (Leaders of Bulgarian…) And why wouldn’t they separate it, why is HD stuff in DE?

Those lines could be there probably since development and some of those added for the preparations of ranked dm lobbies.

The main issue with the lobbies is that they don’t show more than 100 games, if they right now add ranked lobbies, no one would find a match, this problem has been there since release, i think when they opted for MM, they never finished to coding the lobby browser and left it incomplete, if it wasn’t for aoe2dot net the lobbies would be dead.

And why wouldn’t they separate it, why is HD stuff in DE?

DE was likely built with HD as a starting foundation, just like HD was built on top of the original AoC.

Those lines could be there probably since development and some of those added for the preparations of ranked dm lobbies.