[ problem solved ] Got banned for nothing

Hello,
the cheaters in this game are serious problem. I played yesterday [ Empire Wars ] against person that used cheat engine that destroy every unit and building on beging on the match. I decided to react as fast as possible and reported him directly via email to Age of Empires support. And instead a cheater, my account got suspended for 318 hours.

I already reported the problem and there is no way I got banned for dodging games, smurfing or rude behavior since I never did that. I really have no words, I just launched the game cause free time to have some fun and can’t enjoy it.

Did anyone got banned here without reason too or the story similiar happend ? 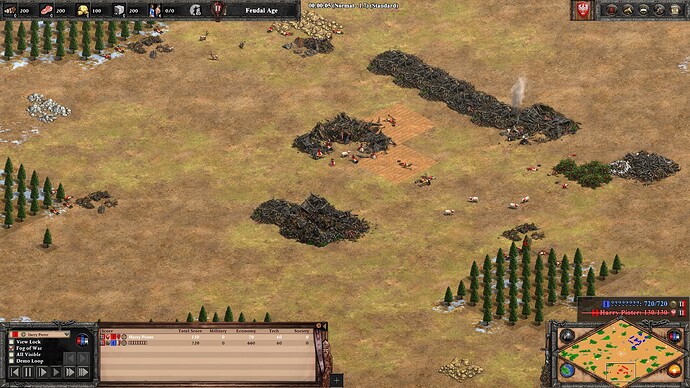 did you ask game support for this ? i hope it was just a mistake from them

Yes, indeed. I really love the game and since I am studying now, when I have free time I really enjoy playing 1v1 Empire Wars. I hope it is just a mistake too.

the banning system, family shares, smurf in both solo and TG, TG team match are all in a mess.

And this is huge shame, because AoE II balance is currently far far better than ever.

I think, pinging devs won’t work. As I said in my post, I directly emailed aoe support - I got reply to send more informations and I provided recorded game, date of the match and screenshot of his profile… and they banned me.

Yupi ! Back to spam those przywileje szlacheckie knights.

Congrat and good news for you.
I checked AOE.net and now he’s gone.

I wonder what the actual “punishment” is, as I am kind of worry if he can just create another 0 cost account and enjoy his boring hacking games.

And this excatly what I was thinking about. I got suspended for around 320 hours, so probably cheater is banned for few days too ? I hope he is gone forever, but still like You said he can create another account for free.

Probably the hacker is banned for 14 days. He will be back soon 11111111 (Or he just makes another account and use Family Share System)

And this excatly what I was thinking about. I got suspended for around 320 hours, so probably cheater is banned for few days too ? I hope he is gone forever, but still like You said he can create another account for free.

He is gone for 2 weeks. Another cheater got banned for 14 days only.

The cheater called SUPER HOANG only got suspended for 14 days. Now he is back. https://aoe2.net/#profile-6893982 I think it is insane hackers only get a temporary ban instead of a permaban. Does this game even have an anticheat system? I don't think...

Why do the hackers actually do this?
Without any thing of work to it, gratification is just senseless.

Something must be wrong with their mind.

They should add vac bans and xbox accs terminations for hacking.

The real crime here is that lumber camp