Unfortunately algorithm that is used by profanity filter is extremely aggressive and creates false reports at every opportunity.

Example of such issue: 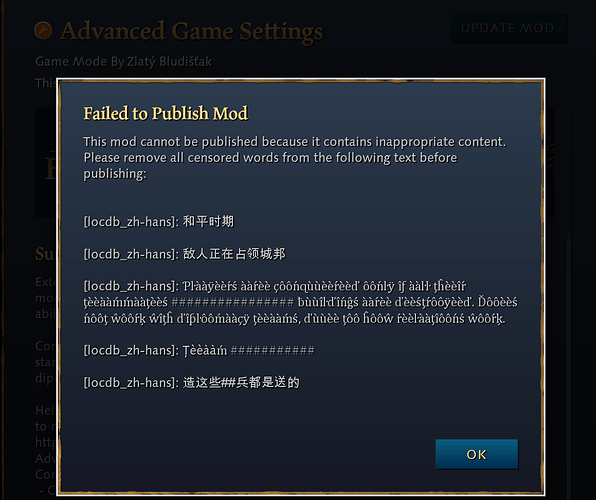 In this case all Chinese lines are completely fine, there is nothing wrong with them and I do not believe they are offensive…
Another problem with this is that if mod main language has additional lines, then if translation is missing these lines it will report them and prevent upload as well. (3. and 4. line)

But this is not everything, there are many more cases. Using even extremely common words such as Keep can lead to failing to publish… For now I don’t have screenshots as these issues were at least in my power to solve as I know English. But for other translations I have to depend on someone from community to help with it and profanity filter just creates major hurdle in the process…

Another problem with algorithm is that it’s not able to understand context such as humans are. This is always issue with any automatization, as this once again creates issues where something that is completely inoffensive and does not have any intention of being offensive like writing my github url in mod description is reported and stops be from uploading mod: GitHub - Woprok/AOE4-AdvancedGameSettings: Game mode that allows more customization over standard game rules in Age of Empires IV

At the same time mods that are offensive, and even were reported as being offensive are still available. Also there is guaranteed way how anyone who wants can use anything that profanity filter think is offensive during the match as it’s again naïve check, done by algorithm unable to check context etc…

This is extremely discouraging for me and I don’t even want to continue supporting mod in future as at every step I am met with unjustifiable obstacles thrown at me and other modders that wanted to create something great for community.

Once again we received quarter-done solution that doesn’t solve issue, instead it creates more issues.

Not to mention that we had topic over 9 months ago already that we want option to make profanity filter optional and we still did not get it. How hard can it be to listen to community and give us single checkbox ? so we can at least communicate during the match without problem… Instead we got profanity filter even for mod uploads and i’s just causing more problems.

AND YES I CONSIDER THIS BUG AS IT DOESN’T WORK AS INTENDED AT ALL! unless the intention was to make everyone even more frustrated…

@Woprok apologies that you are feeling frustrated and discouraged—definitely not the intent! I’ll get this in front of some important eyes for discussion.