As the title says. See timeline below. None of the AI players have advanced to Fortress and have capped themselves at 45 vils. Recording is attached. 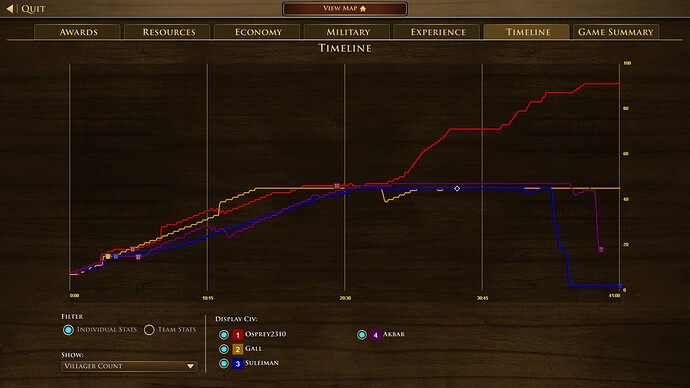 I’ve played only one game.

AI will advance to Fortress Age and beyond and also train vils.

Heey @DiplexBoss6, I wasn’t able to reproduce your issue of the AIs not trying to reach the Fortress Age. The AIs have by the way always capped themselves at a certain amount of Villagers(for example 45) / army in the early ages, so this is intended.

Maybe something went wrong in this particular instance, on lake Victoria.

I’ll play another match later and if it happens again, I’ll send a recording on this thread. Thanks a lot!

Besides, AI in PUP is very intereted in upgraping the trade route, although it has only one TP!

Hi there @Ippert , here is another game where the AI enemies did not go beyond Commerce Age except for one. Not advancing beyond Commerce Age severely weakens them, as you can understand. My allies went up to Fortress/ Industrial etc, but the Indian and German enemies just stayed in Commerce and spammed a lot of Commerce Age units.

P.S. This game isn’t on Lake Victoria though. So it seems something else might be the issue. I noticed in the PUP notes that you’ve updated when the AI wants to age up and with what urgency, so I thought I should report this.