Title is self explainatory. We need to make them change to MMR for season 2 or fix it in another way, the way it works currently is horrible, it rewards players who play alot and ELO doesn’t actually mean much.

Before my example, let me preface it with this: i have absolutely no intention in trying to paint this player in a bad light, he was simply one of the first and most obvious examples i could find. Don’t send any hate to him. Most people won’t bat an eye when they hear about hidden MMR or the math behind it, which is why i believe using an example is needed.

So, his opponents must be pretty high then aswell?
Nope, in these 75 games, only 10 have been against opponents who are above 1400 elo.
On top of that, he has 12 games with players below 1200 elo.

This is not due to there being a lack of players searching, as you can see by checking the match history of any top player.

Why does this happend? It is because ranked has a hidden MMR, that has absolutely no relation to the ELO, the matchmaking will find a player close to you in MMR and not ELO from what it seems. The MMR also decides how much ELO he will win/lose, so he will still win more ELO than he loses while playing against players who have much less ELO, but similar MMR.

This incentivices players to keep playing, as they will slowly start going up in ELO (and more importantly, ranks), even though they might not even be improving as they go along. But, it simply ruins any idea of having ranked and ELO as a measurement of skill.

The MMR number should replace the ELO number or alternatively it should be visible for players to see on the leaderboard.

While I wont say this isn’t true but we would have to know how long person has been searching for the game. Because matchmaking drops the “elo” to lower really fast. If I recall correctly at 5min mark its like -150-200

This is not due to there being a lack of players searching, as you can see by checking the match history of any top player.

Lets take my friend vertex as an example:

In the 30 games since ranked change, he has only played 3 games where his opponent is below 1400 elo. His avg elo for those 30 is even lower than the past 75 of the guy mentioned earlier. 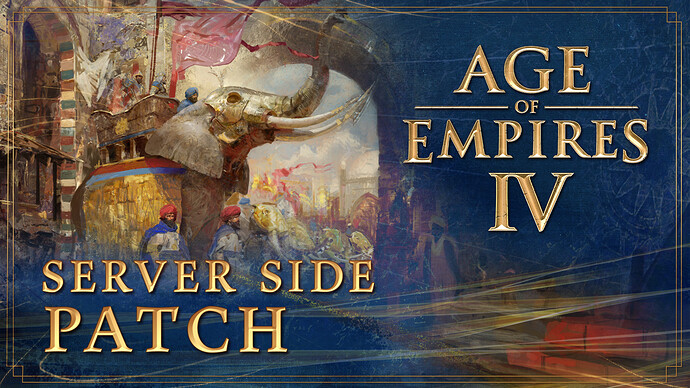 Following on the heels of the Season One update, we're excited to introduce a brand new path for bringing you smaller, more pointed changes with Server-Side

Do you have time he spent on finding the match?
Is the matches played at same hours?
etc many unknown variables.

Again not ssaying its not ■■■■■■ up and good system. Just curious

Its just extremely unlikely. The guy mentioned plays so much i doubt its possible he is only playing at bad hours of the day when nobody is on. Another example to disprove: Usseewa's Games – AoE4 World
This is NyanRacingCat, top player. He plays at really obscure times, (also streams them, which is why i “know”). I wake up in the morning at like 6-7am (EU) and he will have been streaming for like 3-4 hours already. If anyone was gonna be playing lower ELO players cuz of long search times, it would be him.

It is theoretically possible to dodge players with high elo, but this guy plays so much i don’t think there is a way. And on top of that, ive seen other players with the exact same situation (playing much lower elo players but still climbing).

The last profile I don’t see similar issues compared to first one. First one has very clear big elo differences but in this last one in regarding elo relatively well matched (outside of it being smurf account ??)

The last 2 profiles i have sent are to disprove your point that this is just “long search times”. Please read more carefully.

Do you have time he spent on finding the match?
Is the matches played at same hours?
etc many unknown variables.

Maybe. If the variables are the same for each account then sure its more than likely to be true.

It wouldn’t be surprising that they don’t show “true” elo for players. Don’t know why its so ■■■■■■■■ hard to do. Same is with other games. All I care is clear representation of how im matched and where I stand.

Even if the devs would clarify this it wouldn’t mean much because we all know they can just do lipservice to sound it right even tho its wrong.

I hope this is not another blizzard case.

There is no elo in Ranked as far as i know.

Pairings are based on Elo in Quickmatch and based on Rating on Ranked.

And the more wins you have the higher the rating.

And if we look at the official ranked season 1 leatherboard we see 2 players at the top, DemusliM and Beastyqt.

So based on this there is no hidden MMR but fixed win loss points.

This is creates a bad habit of ditching high rated players for a lower one to have a higher chance of wining.

This is mostly speculation on my part until confirmed or infirmed officially.

I’m pretty sure there is an MMR attached to your profile. AoE World and other sites have MMR for you, why wouldn’t the devs?

Hidden MMR is all but confirmed(might be, i just haven’t seen), yes i am saying ELO, i should say rating instead. You can literally look at almost anyones match history and see that there is hidden MMR, because players will gain/lose elo in very different ways, which you could not make sense of if you tried to based on rating.

There is rating and theres the hidden MMR (which decides who you play and how much you win/lose when playing others.)

Yea that’s what I thought

This is corect that elo changes in every mach you play because this is an overall strength of the player.

There needs to be transparency on how the system works.

Think its broken now cause you play 2 games win one lose one and gaining 15 points or so.

They should just remove rating, or make elo(hidden MMR) visible. Changing rank requirements would be bad.