The matchmaking in the ranked team games, unlike 1v1 ranked, is not balancing teams with roughly players of the same skill level. Instead most the time the skill level disparity between teams is quite large, which leads to very quick roflstomp games.

Now I’m pretty sure there are some players that enjoy wiping the floor with lower skill level players, but I hope that I’m right in thinking that the majority of players are more inclined to enjoy playing against challenging opponents.

I’m by no means an good player, and I know that people will say that I should spend more time improving so that I can carry said teams instead of ‘whining’ on the forums. However, I feel like it’s not fair to be punished just because I haven’t got the time available to spend playing the game to get good enough to make the difference in a game that’s stacked against me/my team from the beginning.

I’ve seen this brought up in the past, but from the looks of it nothing has been done about it. I therefore, hope that the developers might finally do something about this as in my opinion at least it ruins the enjoyment of ranked team games for both sides.

This seems to be te main reason for the unbalanced team games. The devs made an error in the Elo calculation. As result TG rating is inflated. So your rating is more like something that represent how much you play instead of how well you play. So elo dont reflect your skill very well. As result game are unbalanced.

That thread i started in May 2020. I even think this issue was part of the game since the release. Until now the devs never respond to this issue. So it looks like the devs dont really care.

Until now the devs never respond to this issue. So it looks like the devs dont really care.

The worst part of it is that it is likely 1 line of code change, basically replace a maximum with average

And a reset to ratings. Call it Season 2 and add some icons to make it look like it was always the intention.

pretty sure the problem comes from the ELO not being tweaked in premade teams.

And this is only ONE issue with premades.

Any other game handle the premades, being starcraft the best with different ELOS for every matchup, but here in AOE2 is an issue ignored. same with the alt-f4 dodgers and the limited map bans.

This needs to happen 100x, but its devs literally dont care like certain chess-superGM

Good solution is take a percentage of 1v1 elo, is true that there are a players that dont play 1v1, but is minority, is good for leave smurf players in TG or unbalanced matchups and allow better games.

I found out that at the end of a game when you see ally and opponent ELO it is already increased/decreased by the game you just played. That is why the winning team always looks stronger by around 30 points.

Inflation is not only a bad thing. If lets say a 2000 elo player stop playing for 5 months. and when he is back i doubt he is still that good. its right that he actually fell for like 100 points.

There is already a decay of the ratings for inactivity. If you dont play for a while, your rating already starts to drop.

didn’t know that, but that is ok, than inflation has no uses.

Inflation is real and your statement isnt correct. Check this out. I stopped playing for 11 months… And I have climbed like 250 points easily, losing 2 or 3 games on the way. Its not that I am playing better now, in fact I am worse after 11 months away, but just facing worse players at 2400 than I used to at 2200. 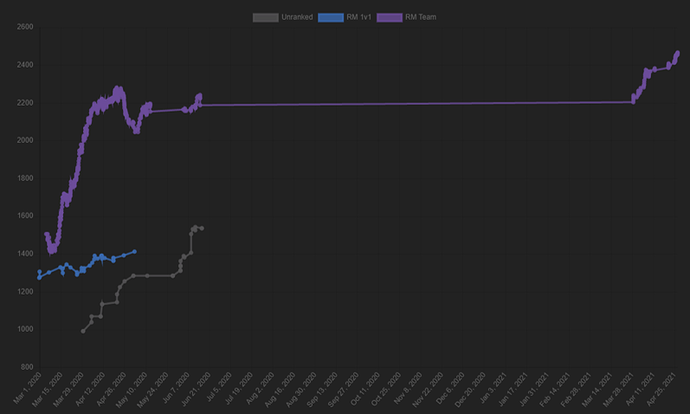 That is settled then. So inflation can be usefull. Though in your case you really got back fast into it.

537 days and still ranked teamgame elo is a effing joke. Just bumping this thread if anyone notices

Seriously. 2 games in a row I was matched with the fellow below. What is this!!

Altf4 and going to play something else, what a waste of time.

If this was a game that generated enough cash flow for a company, they would have solved this problem within a week. It’s very unfortunate that they ignore this problem (not because they don’t have dedicated resources) because they just don’t see any improvement in their revenue if they tweak the matchmaking system.

The only way to make them change and fix the TG matchmaking is either someone proves that it hurts engagement and revenue for the game (though revenue is probably not affected much), or we organize and contact the game team enough that they do it for customer support/satisfaction reasons.

I think you have a misconception about this.

He can have 400 more losses than wins for some reasons, e.g.
-not pressing alt-f4 to systematically play with higher rated people, like you do
-starting to play ranked TGs right away without experience, a few hundred games will be probably lost
-playing without premade teams, a lot of the losses will be because people are much more likely to crash or early resign without premade teams
-beating high level teams more likely while also losing to same level teams more likely

He can have 400 more losses than wins for some reasons, e.g.

You forgot THE reason: Team game elo is bugged since the release:

I would not consider the rating system bugged, it’s just too simple.
Also rating inflation and the mentioned properties of the rating distribution don’t imply that a better match can be found with just this distribution.

I give some didactical examples in which cases a match can still be broken:
-A player isn’t adjusted yet. He has a 90% winrate but his rating is still low. This player will cause many imbalanced matches until his rating is set.
-A player prefers to play a particular map. The player bans Arabia and prefers Arena. He is a specialist on closed maps. If now the match is on an Arabia style map (Valley, e.g.), he cannot perform according to his rating.
-A player dodges maps or teammates by alt-f4. His rating is higher, because he interferes with the matchmaking in the first place.

I would not consider the rating system bugged, it’s just too simple.

It is bugged. TG ratings are inflated for a reason. You can say the how and why in that other thread.

Yes, there are also other issue with the TG rating, but claiming the TG rating isnt bugged is clearly wrong. Even one of the devs replayed in that thread say it is discussed internally.