There are lots of bugs within the civs.xml concerning regen. for one regenerating units that can be shipped to team mates such as spahi and urumi do not regen when shipped to allies without the regen specified in this file.

another bug is that spahi have a much lower heal rate and much higher lockout time compared to legacy, where it was 2% with a 2 second lockout instead of a .25% with a 3.5 second lockout.

spahi heal in 50 seconds rather than 400, allied spahi/urumi heal as well.

good way to solve this is to have a tag shared by these units for healing in the civs.xml so even if they are shared by allies the healing is not connected to a certain civ. for minutemen class units rather than target each one directly have all civs target the unit tag “LifespanUnit” which would simplify the code and ensure they all behave as expected regardless of their civilization.

for units like urumi, explorer dogs and skull knights having a “RegenUnit” tag and targeting that tag for healing in the civs file rather than each one individually would solve many bugs associated with healing as well and ensure they behave the same regardless of the civ.

for units like spahis with higher healing potential a “HighRegenUnit” tag would similarly solve the problem. having an “abstractyorubarider” to target rather than each yoruba rider type individually would also be helpful in reducing the chances for bugs. 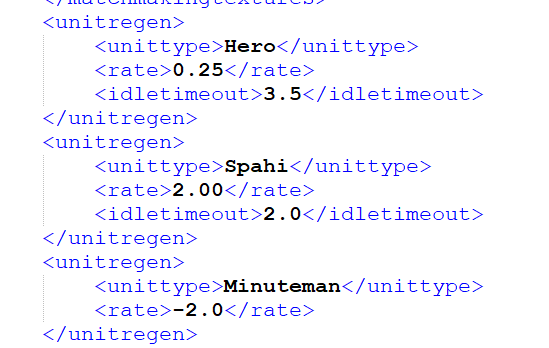 Heey @newaoeiiiai, thanks for the report. We’re now tracking that Spahi and Urumi units don’t regenerate for most civilizations

just wanted to correct a mistake in my post you probably noticed, spahi now heal in 400 seconds rather than 200 as I originally stated, while in legacy it was 50 seconds, an 8x nerf to healing speed.

this bug has essentially removed an integral part of ottoman gameplay that was there since the launch of the game. it was practical for a player to remove an injured spahi for 30-50 seconds to heal the damage taken, but no one is waiting for 4-6 minutes waiting for their spahi to heal. at that point its better to suicide the spahi and use the pop space for something else.

spahi regeneration has essentially been made superficial without real gameplay or reward for playing into it. the high regen and low lockout was an intentional part of their design to encourage players to take advantage of it. its fine if there is no practical use case for skull knight/urumi regeneration as they never had this feature before, but now there is less micro potential and decision making for otto gameplay. if any changes should have been made it would be to increase regen to 2.5/3% for non-immortal units instead.

noticed on the October update that Spahi still heal 8 times slower than they used to in legacy. is this an intentional balance change for de?

We checked Spahi regeneration in Legacy and it seems that it is the same one as in DE. This unit seems to be correct.

Again you are right. I double checked the .bar file version and it is .25%. the file I was referencing has been modified.