Watching playback of multiplayer games ends early. (8 player game, 1 disconnect at very start of game). Playback ends very early just a few seconds after first player clicks up to castle age. The filesize on disk of the AOE2RECORD file is 5,177KB, which is comparable to my other replays which lasted to post-imperial as this match did. Makes me think that the record file actually did continue to record but the playback is the problem.

This has happened multiple times to my replays. I’m not sure how to reproduce it but I’m willing to hand over affected AOE2RECORD files if it would help figure out the issue. I also have a game which lasted 9 hours in singleplayer, and I could playback the entire thing without any issue, so it may be limited to multiplayer replays. 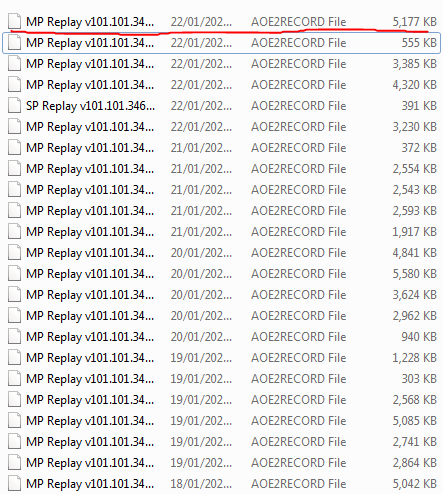 All these multiplayer games are ranked

Replays consistently stop once someone - any player - leaves the game. But I still have some replays that stop right at the start when no one has left, those I’m not sure what the cause are.

Then what is the point of enabling recording of replays if the host is required to sit through the whole game? This has happened to me with unranked 4v4 games where the host has quit within 20 mins and the game has lasted 1+ hrs. The replay ends after 20 mins…

In this case, a person left at the very start, but the recording stops at about 20 minutes. Nobody else disconnected until the end. It was also a ranked automatch, I wasn’t aware that there’s a player host to ranked matches? And if so, why did it take 20 minutes for the replay to stop if the only player to disconnect disconnected in early dark age. It also doesn’t explain why the filesize of the replay seems correct compare to other similar game replays that do work

A couple of my latest replays end way too early for some reason. This is not related to the 15 second replay bug that I posted as a separate bug report. I had a game that lasted around 2h. The replay ends at 1h1m. Game was an unranked 4v4 Arena match.

Come on guys. Watching replays is as much fun as playing the game. Please, at the very least, acknowledge this bug. I can post the replay files if required.

I have at least a replay or two that won’t load at all. Can’t remember if anyone resigned, but that shouldn’t matter

It is quite annoying. When I have a particularly close game I like to go back and see what I could have done different, when the file wont play fully it’s pretty sad.

I hope something gets done about it, replays should be independent of a player leaving.

I have the same problem and hope the devs will do something about it!

Since the latest patch does not fix this issue as per the patch notes, bumping it up.

I really, really want something to be done about this. Why can’t every player get a their own copy of the replay?
I just had a very interesting, hour long, neck-a-neck game where at the end I missclicked and returned to the lobbies. Thought I’d just run the replay… denied. Host lost 15 minutes into the game. Replay ends. Not the first interesting match where I wanted to take some notes from the replay… Kinda defeats the whole purpose of a replay in the first place, no?

This is still a problem since release! very surprised it’s not been fixed!