In the September patch, the AI seems to be doing better (Thanks a lot for all the work!). The early-game of the Russian Hardest AI, however, seems to have been messed up. You can see this quite easily since throughout the game, Russia seems to have a very low score, and when I looked at the recording, I understood why.

There are several issues, which I’ll put down with pictures (I don’t know if it is useful to put all these issues in different posts):

Screenshot (85)1920×1080 335 KB
Does not build a house. Despite having no population to train villagers. The wood was reserved to build a Trading Post. And the AI is trying to gather wood to build a house, if you look in the photo!!
I don’t know if that’s an optimal strategy for Russia play?

Screenshot (83)1920×1080 273 KB
Meanwhile , explorer engaged a four-outlaw treasure with the explorer. The other AI have been very efficient at gathering treasures since the PUP. Russia AI hasn’t learnt yet? 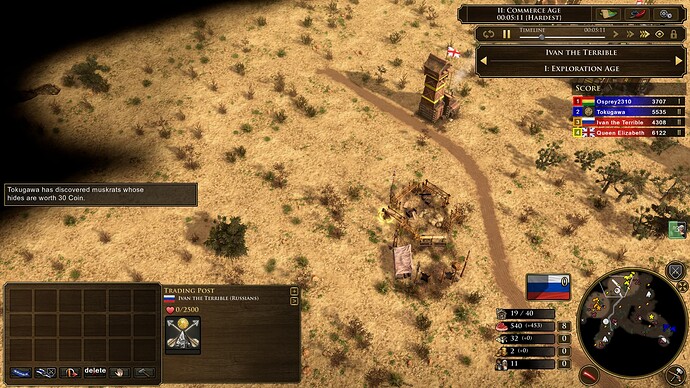 Very Frequently. In all the matches I played, the Russia AI has been trying to build a TP instead of a house. This may work for some civs, but here I don’t know if its good for Russia.

Sometimes it will train too many villagers and age up around 5 minutes and have no defenses. etc. when I already have an army and can kill it quickly.

This is the hardest AI - should know to execute a proper build order and respond to attacks or be aggressive. The AI was honestly very strong couple of months ago, can it be as strong and challenging (for casuals) as it was then?

Thanks for your reports, this issues are known issues and are working to improve it. Have a good day!