During the last 8-10 days, this problem has happened twice, so I don’t know if it’s due to an upgrade or…

I mainly play singles user campains. I use 9 saved games in rotation (named T1 thru T9) for saving progress, so that I may reopen a game at a previous stage if needed.

However, today and also a week ago, when I open the saved games dialog to continue on the game I played yesterday, neither of the files show up with that date, but all have dates three days previously, so all progress I’ve made since then are lost…

If I open the saved games folder, I can see files dated yesterday, but I don’t see how any of these can be opened since they don’t seem to have any exe-file associated with the files…

I use the MS store version of the game, not Steam if that makes any difference.

How can I force the game to restore my latest saved games?

Here are some screenshots: 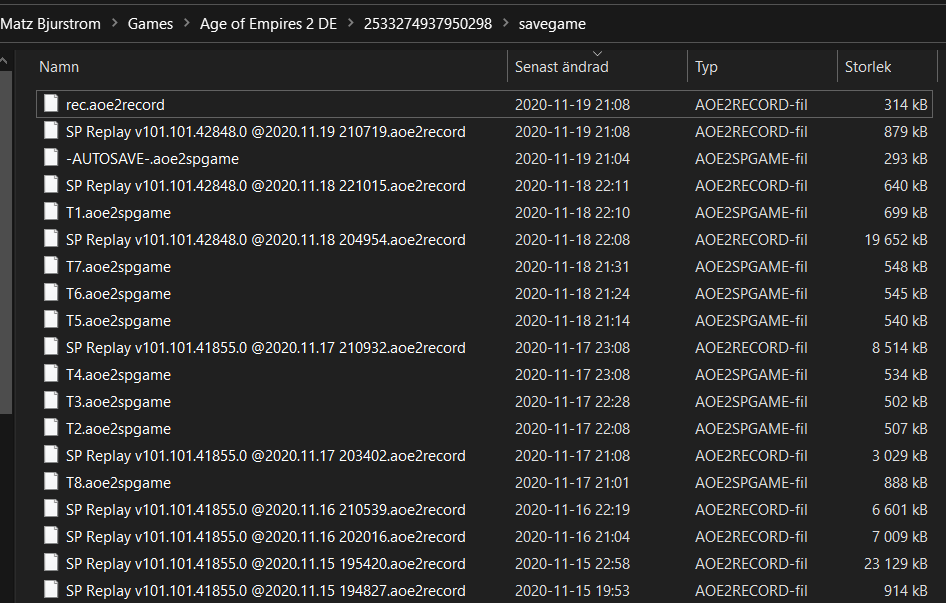 Additional info: Seems this problem relates to the latest update. Upon launching the game, I received the Anniversary Event Login to XBox first award. I then played a first game of the Event. When I later went into the saved games list, I got the above problem. When I tried to resboot and go back all the way in, nothing changes. If I try to launch the Autosave game, I end up in the Anniversary Event game I played and not any of the campaign ones…

Now the same thing happened again. Either it’s those ■■■■■■■ events, or the XBox Gamepass update for PC… Today, when I start my AoE II DE to continue what I played yesterday, all I see are games from 23d nov. ■■■■ YOU!!!

Everything is gone, I cannot even go into campains and restart the last campaign, because all previous are missing…

IF YOU CANNOT HANDLE SOMETHING AS SIMPLE AS THIS; STOP THESE STUPID UPDATES ALREADY!!!

This is the perfect scenario where this is obviously a bug - this section of the forum is just for help from other players - not devs. We unfortunately can’t help with actually bugs.

Please file a bug report where someone can work on solving the problem:
https://forums.ageofempires.com/c/age-of-empires-ii/aoe2-de-bugs/102

I did. And was actually redirected here to this post (my own…)

Oof. I am sorry

This problem seems to be specific to the Microsoft Store version - you potentially could back up the files in the directory manually after each game session and copy them back into the folder after you start the game again if they get overwritten with an incorrect version?

Is there a fix yet? I’m having the same problem for two days now.

Same here, game from Microsoft store,
open games 2th of january (last time was 29/30 december) and saved games and progressions in campaign since half december are lost, the newest savings are still in the pc folder but the game sees the oldest one, if I play and save a new game now the new file is in the same folder with the ones that game can’t see, still the game sees it and not the others.
It seems like everything done within the last event is gone.
Actually it could be that this already happened to me and either it somhow got fixed with the new version or I played again the lost campaigns, but I can’t remember.