Placing down certain terrains (A lot) they appear as if they were black terrain (besides the edge which merges with other terrain, those work). When placing other terrrain against it, it turns to normal terrain.

Edit: After a terrain has been ‘converted’ to normal, it stays that way. Only terrain that appears as black can reset the other terrain that was black before (as shown in the images below). Terrain that works properly does not reset the ‘blackness’.

Edit3: This is a purely visual bug, reloading the map or just play the game the terrain looks normal. It’s purely placing terrain in the editor

Selected Forst, Baobab and dragged it 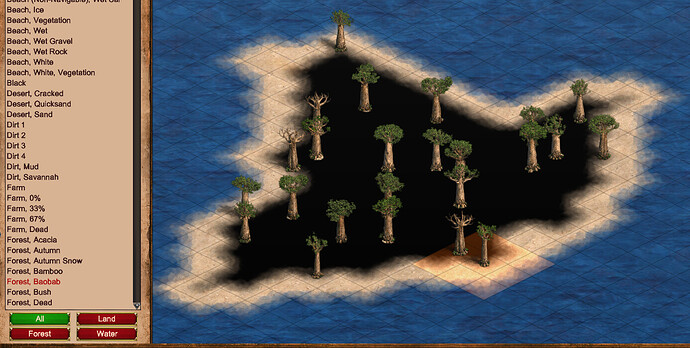 Now selected forest, bush and dragged the terrain against it.

Generate random maps a few times and the bug will appear

Hi there! It looks like you are playing on a much older version of the game (37906) than is currently available (42848). If you have disabled updates, I would recommend ensuring that you’ve updated to the latest version to make sure you’re working with the latest changes.

To confirm: you are NOT seeing the issue anymore? Did you verify the integrity of the game files or do something else to remedy the problem?

No, what they said is that they ARE seeing the issue on the current patch and just reported the wrong game version.

I had this problem this patch. I didn’t do anything but restart the game. So it did happen this patch. That said, I haven’t had it happen again.

Problem still exists. A fix would be nice.

This bug seems to be fixed in the latest pup_march build. If you have time, give it a try. I wasn’t able to reproduce this bug anymore.

After generating a hundred or so maps (In pup_march) from different RMS scripts and different sizes without running into the error, I assume it has been fixed indeed

Save map. And then leave. It’s fine. That’s how I fixed the issue anyway.

Yeah, that’s the workaround. Although when working with maps, having to constantly reload the map isn’t very helpful. So really happy it appears to be fixed in pup_march