Hi. Ethiopia main here. I don’t see any benefit in sending Sebastopol Mortars and I think they are so worthless that they are actually bugged. A few patches back their damage got nerfed (to 300 damage from 500) to prevent the 1 Sebastopol Mortar card in Age III from being OP, but their damage was supposed to return to normal (500) in Age IV. Instead, it just gets buffed by 25% which makes it a measly 375. Let’s compare the SM with other cannons below, and remember as they are an Age IV cannon technically, they are best compared to the Heavy Cannon.

Sebastopol Mortar- 375 attack (Age IV) (6 ROF) extremely slow, very expensive, can’t be made in factories, the infinite shipment card costs 600 influence (and a card) after the first send. It doesn’t even have more HP than the cannons below. Their siege attack range is 34 compared to a mortar with 40 and it has significantly less siege attack. 2 mortars costs 900 and 1 SM costs 1,000 influence. Why would anyone choose the SM?

Papal Bombard- 430 attack (7 ROF)- has Deflection (!!!) and with card, Holy Fire. This cannon is considered relatively weak from what I know so it being superior to the SM says something.

Heavy Cannon- 600 attack vs infantry (6 ROF)- free, can be made in factories, not too slow, very powerful (literally wins games). Same AOE (4) as an SM, same HP, higher speed. AND it’s affected by cards. The SM isn’t even affected by Italian Firearms.

Field Gun- Higher attack than the SM, for half the cost.

When the African Royals first came out, the AOE team made a tweet saying, “What is your favorite unit and why is it the Sebastopol Mortar?” This was my favorite unit, and yeah maybe it could be “lamed” in Age III, but why make it utterly worthless in age IV? It’s Ethiopia’s special unit much like the Great Bombard is to the Ottos or the Gatling Gun is to the Americans, and it absolutely needs to be fixed. I can almost hear people laughing behind their monitors as they focus fire by slow firing SM.

My proposal is simple; correct the Age IV damage to 500 base attack. Age III I don’t really care (although currently that Age III shipment is not even as good as 2 falconets but there’s a lot of things wrong with Ethiopia).

Yes they are hot garbage, especially for 8 population. Would be good if they got buffed for later game.

but their damage was supposed to return to normal (500) in Age IV.

When the change happened I reported it as a bug and a dev mentioned that the dps was returned to normal in age 4 not the damage itself.

These details are CRITICAL; DO NOT skip them or your issue may not be reviewed. GAME BUILD #: ###### GAME PLATFORM: Steam OPERATING SYSTEM: Windows 10

DESCRIBE THE ISSUE IN DETAIL (below). LIMIT TO ONE BUG PER THREAD. The patch notes say that the mortar should have the normal dps of 500 attack in age 4 however it only has 375 attack. [1]

The rof was buffed. Before the patch it had 8 rof but it got buffed to 6 rof so it’s age 4 dps is the same as before the change.

Personally I would like to see its building siege attack buffed by 100 damage so that it is comparable to an age 3 mortar. Currently it has worse siege than a 2 organ gun shipment.

imo papal bombard is the worst, they are really slow, and yes, is ROF and damage is really bad for their pop space. At least Sebastopol is easy to micro. yeah, that art needs a little buff.

As soon as mountain monasteries get a nerf too. An eaaily spammable building that gives resources, auras and have high HP is far from balanced.

It seems that we havent learnt anything from tepees and flags…

The rof was buffed. Before the patch it had 8 rof but it got buffed to 6 rof so it’s age 4 dps is the same as before the change.

I think that dev was incorrect. Here are the very old (upon release of African Royals) Age III and IV stats for the mortar: 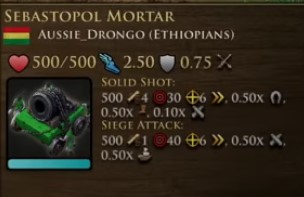 Here is the Age V stats:

It had 6 ROF, the same as now. Right now the mortar just feels super unimpactful. I would rather have had slower ROF anyway than nerfing direct damage. Before when a shell hit it was hilarious, now it feels horrible. The heavy cannon isn’t even a unique unit and it just does so much better in every way, with a ROF of 6 and absolutely massive damage.

imo papal bombard is the worst, they are really slow, and yes, is ROF and damage is really bad for their pop space. At least Sebastopol is easy to micro. yeah, that art needs a little buff.

The Sebastopol Mortar is so slow and bulky that it can’t run away from anything. Also, at least the Papal Bombard has deflection which is pretty good. The damage there is lackluster as well though!

And I complete forgot the Heavy Cannon is 7 pop and the SM is 8 pop! 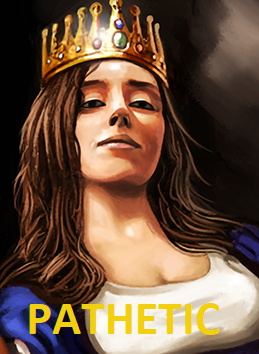 I think that dev was incorrect.

The dev was correct. The hotfix from the patch they were released in nerfed their rof to 8. Age of Empires III: Definitive Edition — Update 38254 - Age of Empires 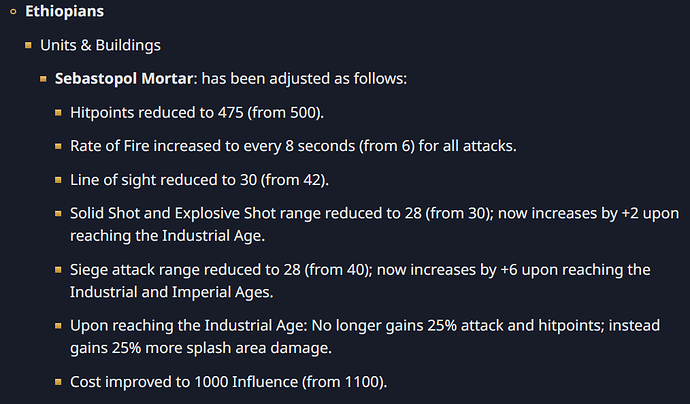 Okay the dev is correct, but the original point still stands that the mortar is ridiculously weak right now.

I’m not disagreeing with you I just wanted to make clear it is not a bug. I’d like to see it buffed in some capacity.