I just completed the second challenge to win as the Burgundians straight after having signed in to Xbox Live to get the first one. The Event Mods however is showing the Coustillier statue as only “Temporarily Unlocked”. How to make the Coustillier Statue permanent when I already completed the very first challenge? 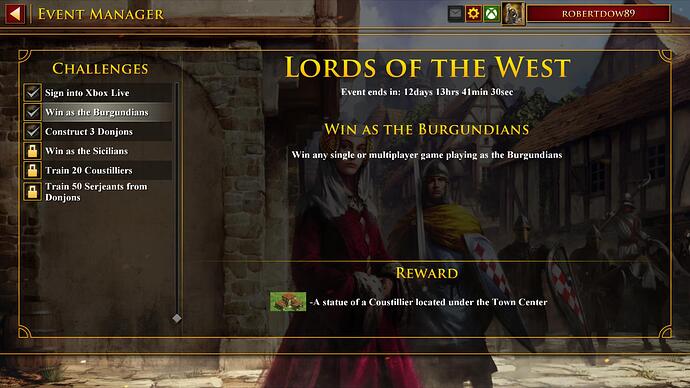 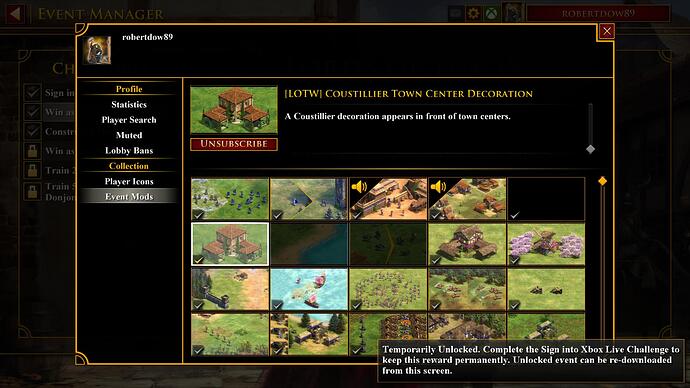 At least your’s unlocks. I have won as Burgundians in Skirmish and Multiplayer many times now and it never unlocks the next challenge. Sometimes I will get a count down to the next challenge but when I reopen the game again its back to the second challenge.

I’ve also written to AOE2 official support page about my issue. I hope that it won’t come to having to download someone else’s mod after the event finishes…

An update with this bug. I’ve now unlocked the Sand Donjons & they are also only Temporarily Unlocked…

Another update: I completed the fifth challenge during a SP skirmish to train 20 Coustilliers and I then won the same battle. Instead of getting to the postgame statistics (& getting the confirmed completion of the challenge), AOEII crashed to Windows. However, when I relaunched AOEII, the fifth achievement was completed and another kind of strange thing: the Coustillier Statue was automatically loaded in my Event Mods page, without me having to subscribe to it.

Just made another thread here if the moderators want to close this one:

These details are CRITICAL; DO NOT skip them or your issue may not be reviewed. GAME BUILD #: 50292 GAME PLATFORM: Steam OPERATING SYSTEM: Windows 10

DESCRIBE THE ISSUE IN DETAIL (below). LIMIT TO ONE BUG PER THREAD. I have just completed all 6 challenges from the Lords of the West (LOTW) Event and all 3 mods are only showing as Temporarily Unlocked, despite having signed into Xbox Live to get …