yes, I saw your thread, and I think your showings and the discussion really brining out some unfairness of TG games.

I always support the idea of seperate solo and duo queue ranking. This game doesnt like the others, this game is heavily rely on communciation and teamwork in TG. (if we are talking about 2 teams have similar elo, defintely everyone agress duo team wins)

but whatever how much we discussed here, I dont think the game admin will solving this issue.

I just randomly searched one of my opponents (duo team)

the reason I play ranking games, it’s because I want a more balance game.
in RM TG, we might have few unbalancecd game like the elo is having averagely 200 difference.
but for the DM TG, this things absoultely worse, espeically for those duo team players.
If it is the case, I wish this matching can never be done, there’s totally no point to play such unbalanced game, wasting my time and just helping the others to gain their win rate.

but again, I dont think this game admin will ever concern such unfairness.
But let me tell you, as i getting higher elo by each days, I notice these unfairness is worse than worse.

you either sperate duo and solo queue, otherwise people will be less and less desire to participate this unfair matching system, which I raised out before, the preferred map and ban map option for duo teams are absolutely non-sense.

Duo team already has advanatages, espeically for AOE2, this advantages is much larger than the other games, and you keep encouraging this unfairness to happen.

this is the RM TG

okay, so this team wait too long, so we finally matched up.
yes, you saved their time for taking the queue?
How about the time of my team? I dont think this game is fair enough to play with?
After I checked the elo difference, yeah, I noticed my time is being wasted.

Not so funny for you, I understand. I hope they fix it for you.

another unfair matching I just played for RMTG

To be honest, how this matching system works?

This is kind of sick for my experience in these 2 days.

I played around 8 to 10 matches, I only got one win game so far…

now I am about 2600 and my solo rank is around 1600
I found that duo team in high elo matches has a really big advantage espeically for some closed maps.
I played around 2 to 3 Arabia out of 10 games.
and even with this unfairness, I still need to struggle with this non-sense elo matching.
This game will eventually be dead like 10 years ago if this keeps going on without improvment.

never mind, after a game of Lombardia (if you guys are interested, go checking this game:
https://www.aoe2insights.com/match/63858739/
I will never take the solo queue of RM TG anymore until it release update to separate solo queue and Duo queue, this TG match is piece of ■■■■. There’s absolutely no rooms for solo players to win TG in higher elo.

I will only play some custom game or 1v1 from now on.

Man you are not alone on this, but first of all as predicted before DE was released, there aren’t enough active players from different levels to have a working and fair MM system, the MM we are using is designed to get you games at certain waiting time despite the elo differences or players choices, it is a system designed to fail, after a year now i can tell you there are 2/3 less players actives, waiting times have increased a lot and you don’t see different nicks, in fact you see the same players.

If they change things like you suggest that not allowing solo and team stackers to play vs each other, well the waiting time would be huge and then more people will complain and leave, i use a different account to play as solo, because i know i will lose tons of games for free so idc about my elo on that account, but still i get pissed by such unfair game situations, i play way less compared to one year ago cause of the same reasons.

The main problem is that the devs are not going to change the current MM, cause they refuse to give us the freedom to play the maps that we want, with the false advertisement that they want more skilled players in the top instead of only one map players, while they allow 3k elo on the tgs ladder and put an artificial roof to the 1x1 ladder, in 1x1 above 2200 you gain less and less points, look how viper and hera trades 6 points lol, if they ever reach 2600 they will trade 4 points per match, while the super bois in the tg ladder will be 4k by then.

By ignoring us they are making their player base smaller, it wouldn’t surprise me if after the current DE directives if the game turns into the new HD were only very low skilled players were playing.

Thanks for the comment, it’s not very common to find other solo players here.
Every duo players here claim that the system is fair enough so that they can keep their super high win rate on TG.
I agree the devs dont see and not even interested to change this.
However, for the player base, the actual player is no that worse of what you think: 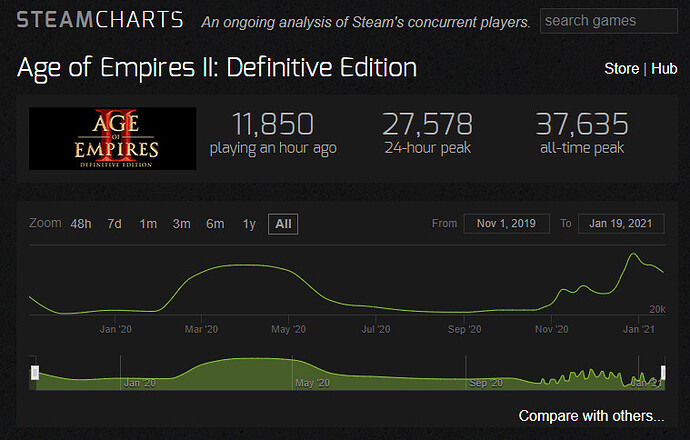 when the situation is more fair, people will be willing to play TG more often instead of the custom one.
To me, I rather prefer to wait longer instead of playing a game which make me feel unfair though.

Yeah those numbers have been high since HD, but most of them have the game open or playing AI, the activity of multiplayer can be measured by the amounts of recordings available from certain levels in comparison with previous months or years, i can feel the inactivity by waiting more time to get a game in the same time and hours i use to play, i am in those numbers of active players by spectating or modding my game, not by actually playing so its tricky.

developer not gonna improve and I will keep posting here.
These are ridiculous matching, the higher elo even are duo queue, vs those lower elo solo players.
Toxic. 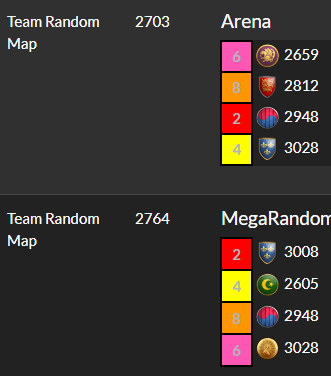 developers, can you tell me how fair this matching is?

I feel like the matchmaking isnt too bad. Ive had some of these “unfair” games as well in the past but what is the solution, if the matchmaking doesnt find any better players for these guys? Should they be stuck in queue forever?

At a certain level u sometimes have the problem to find people at the same level. After a certain amount of time in queue u will get therefore matches with people above/under your elo, which is fine imo.

I highly doubt that u play most of ur games with that skill difference.

Here is my question, if the system balance is really okay, why all of the 4 players in team1 are all higher than the other teams? while there are only 2 duo over there.
Shouldnt they assign 2400 or 2500 so the elo is more blaanced?

ah okay i missunderstood the situation, my bad. I thought they(team1) were all premades.

Well then indeed one duo should get matches with lowerplayers…maybe even just swap with some of the other team, yeah.

Overall i still think these cases dont happen too often. I often soloqueue in teamgames as well(with 2.5k teamelo) and the games are most of the times balanced(usually lowest 2.3k and highest 2.7k, most of the times even everyone 2.4-2.6k, which is perfectly fine).

In my experience only maybe 1/20 games are really unbalanced, which doesnt bother me too much because sometimes its refreshing to play vs much better players(you can watch the replay and learn from it).

I also hover around 2500-2600 Elo TG ATM and matchmaking is tough feels like I’m either stomping people or being stomped. I guess it’s the result of the inflated Elo from the Elo equation not being calculated right like others have said on the forum. Like I can get players that play like 2300s as high up to 2600 that have 2500 Elo it’s kinda crazy how the matchmaking has made the elos less truly representative in TG. Makes it infuriating when playing solo to lose six or seven games in a row when your teammates play worse than their Elo represents (not their fault it’s the systems). I think if this equation was fixed then it would take some time for people’s Elos to reach a state of true representation and then we would have more even and close games across all elos would make the game more fun anyway. It’s rough waiting huge queues of alt f4s for a early fuedal finishing game cos of unbalanced teams

I dont know why, maybe your matching is okay, but for mine, I usually have a -3 in lost game, +10 in win game, means that I always having a unbalanced match up.

ha, and you know what, 3 games in a row
I think this is more clear that how this system is so unfair.
Let’s use the last game as an example, 6P8P are already around 3000up.
How come 2P 4P are still have higher elo than my team?
I bet there must be other lower players in the pool.
Even if they must choose from these players to make the game, shouldnt they pick 5P7P with the 3000up so the game can be a bit balanced? (thought it’s not even balance at all)