Server pop based on elo 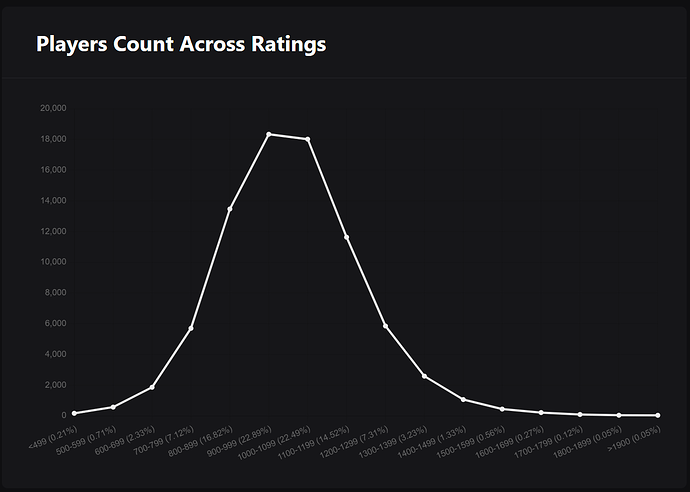 basically i wanted to know what elo has the max server pop in order to get quick matches, not that it takes a lot of time to find a match, but whats the elo level most players are at. and it seems to me from the above chart that most players are within 900-1299 elo range where 900-999 are around 22% and 1000-1199 are another 22%

take what you will from this data, but bear in mind when play testing balance people are right to judge from the balance suggestions for this 1% as they play the civs to their limits and can test balance well compared to lower elo’s. there might be some uninteneded consequences of using their feedback for balance as it might make the game much more complicated for the lower elo people, but i think relic does a great job at balance if you may.

i wish something of this sort was also available for aoe3de.

my take from this is simple, i want to keep my elo within competetive range with a good server pop at oceania time as so i dont have to wait long to get a match. it will also be interesting to see another dimension to this chart with time of day so as to see at what time server pop is high within what region for a particular elo range. might be a bit tricky to interpret but it would be nice.

thanks to the aoe4world team for making this type of statistical analysis possible. i know ms and relic have huge swaths of data from our games but its nice to see something come out of it.

yes 98% of the player base is bad. They make 1 unit per game and mass it. This normaly would be ok but now add in the insane OP Civs like Mongoles and someone OP units like Royal Knights and you can see this will work pretty well juat making 1 unit and rushing it

While I do agree that the balance needs input from low elo players. However the graph does not mean that the low elo players are terrible. Anyone above 900 will give you a better fight than the hardest AI.

Yes, but that’s cause the AI are terrible, not that players are good.
The skill ceiling in RTS games is so high that most players can legit be called terrible. For example in Starcraft 2 people like to say “Everyone is trash except for Maru and Serral”. I think this applies to Aoe4 as well - perhaps “Everyone is trash except for Marinelord and Hera”, or insert your pro of choice here.

That being said while I think balance shouldn’t be decided by lower elo players, design def should take into account their input. If a certain thing is unfun, or takes a lot more skill to counter than execute, then it should be adjusted. That’s why I approved of most of the siege changes from last patch (tho I really really wish they stuck in a compensation buff for China in that patch too)

This is more to do with the absurdly bad AI than the skill of the players. Someone like me shouldn’t be able to faceroll the hardest AI.

The only AI that is ever going to put up a fight is the machine learning one which adapts to all the collective players tactics and learns from the players to improve itself.