Share the craziest things that got censored in your chat

Let’s share out some things we’ve typed that got censored! I’ll start with the ones I can remember off the top of my head:

By the way, what do you think of a game in 2022 having swearing censored chat when the largest social media platforms do not (do any)? When all children have heard swearing since they can remember? When most games do not? When most people playing are adults, many of whom are streaming or on voice chat?

Chinese - the word being censored makes no sense. It’s a damn civ.

Wp … You cannot even tell teammate or enemy he played well

Relic, can you see how stupid is to censor chat? I don’t care for age IV since is a Microsoft game but for COH3, please don’t use any chat censor…

And a bunch of other things in español and other languages.

On another note, I find it very interesting that they havnt chosen to use the same censor for their forums as they do with the game. Maybe applying the words that are censored from the forums to the game would be an ideal solution!

chat feature is def a failure too, add that when I play with german players I see their commands on screen in german! (attack, defend look out) I can handle since I speak 5 languages but with chinese and japanese im out of the game, i wonder how could they do to let me see that in my own language or english at the very least.
regarding the censorship, i have adapted my cursing to kid level and just a few basic words, in fact it doesnt censor CHINA but it does with CHINESE hahaha its pathetic

It’s so weird that the code thinks to write out the command in their language and post it in the chat, vs just sending a numeric ID of the command to other player’s machines for them to decode into the appropriate message.

Speaking of which, who actually wants the words “Attacking this position!” to fill up their chat? What about instead using a symbol next to the name?

Give me a break, how I m supposed to tell my dumb teammate to join me in the front.

it’s american where the culture is very prude 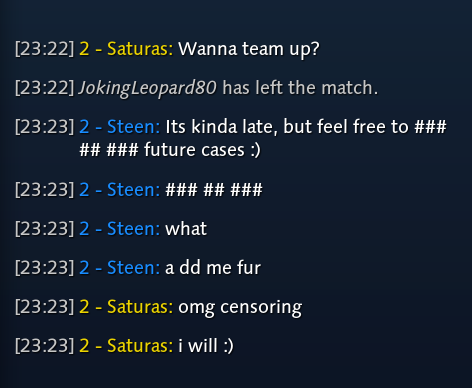 Not gamebreaking, but this is high on my list of complaints about the current state of the game.

I just recently had Béarla censored during a quick match in English that literally just means ‘English.’

Does it think I’m saying a word to close to beer? I have absolutely no idea.

Thanks for this post, I hate this chat filter with a passion. I’ve opened a topic on it myself some days ago.

Same thing. “Come with me” to a teammate, meaning attack at the same time

“#### with me” - then you have to try to think of something else in the heat of the game and it fails…and then your army gets wiped 2v1.

No problem, it is crazy making!

I don’t understand why they didn’t just implement the same ping + chat system that LoL has. Their ping system is amazing, it eliminates most of the chatting I need to do in the first place. After that, I can uncensor chat in the settings and talk as I would normally without hinderence.

For shame. Just… for shame.

I’m a broken record at his point, but please devs, PLEASE get rid of this terrible chat block.

You tell me what he is going to (not) do…
Yeah we lost the game.
Yeah to Chinese.