Hey,
when the game was released, I did not have this problem.
But since the february-patch, there is a problem (I hoped it would be resolved in the march-patch, but it didn’t).
When I shift-queue vils from boar to sheep, everything is fine and it works.
When i shift-queue vils from sheep to boar, they ignore my command and go to the next sheep instead. It happens not sometimes, but all the time. Is there any chance to fix it to the way it was in the beginning (namely that it functioned properly)?

I just tested and it works?

When i shift-queue vils from sheep to boar, they ignore my command and go to the next sheep instead.

Are you certain, that you didn’t had next sheep in queue already, to which you added boar?

thank you RoomOfTheEvil for testing and thank you for your question Yorok0.

I re-tested it and the problem still exists. Yes, I am sure that I did not task the vil on the sheep. Perhaps you were not able to re-create the bug, because the sheep wasn’t as close as in my cases? I will post a replay in which I only demonstrate this bug and nothing else. If you activate “view lock” you can see my shift queue flags, as you all know

here is the link to the game, if you have trouble opening it, I will find another solution (like recording my screen to proof this bug).

Better record your screen of the exact situation where bug happened. Else viewers have to watch whole recording

the replay is only showing the exact situation (boar lure + sheeps). The game only lasts 2 minutes. I tried to make screenshots. The problem is, that this bug is about a motion, which is hard to show with pictures. You can see the flags. I commanded from pigs to boar, but he ignored and took the other pig. As I said, this happens every single game to me. I know not everybody has these problems, but in my game it bugs. 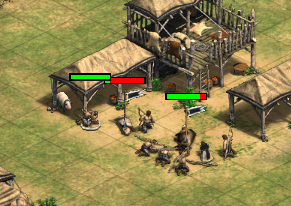 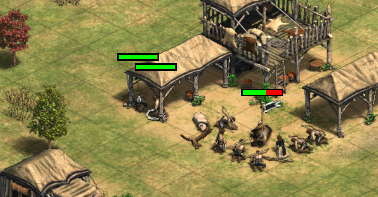 This explains, why most of the players don’t have a problem, because they only click the new command (without explicitly tasking the vil to the sheep he’s working on at the time). I thougt it was necessary to first click the old sheep and then to the boar (two commands - two flags), which was a misunderstanding on my part.

So I found out, how to recreate the bug and in my opinion it’s still a bug, but now I know how to avoid it and maybe someone will find this helpful, if he/she has the same problem.

But I think, there are more urgent issues to solve (for example to be not able to place a diagonal stone gate in front of a diagonal palisade gate), so don’t waste your time on this detail with the shift-queue and thanks alot for the support and constantly improving the game!