Should european explorers be reworked?

I have been thinking, the explorers of the original civilizations, other than ports and spain, are somewhat boring and lack special abilities, or if they do have special abilities, they are locked behind a card, and are generally pretty luckluster in actual combat that doesn’t involve treasure guardians.

Meanwhile, TAD and WC heroes are pretty good on their own in combat, and at least for TAD, they have pretty useful upgrades available at the Monastery.

All TAD heroes can be thought to heal nearby units automatically, one way or the other.

Meanwhile, EU explorers get a dog (yes, I admit he’s good, probably better than his master), a triggered lame heal (for french) or a whirlwind melee attack for british, and these are behind cards, that I don’t think are ever used. Spain and ports can be considered special already with their spy glass and war dogs.

The snipe comes in age4, by that time, sniping a single unit is of little consequence.

My suggestions: grant each EU explorer a special ability. This ability can be unlocked from a church upgrade (similar to how TAD heroes get upgraded at the monastery).

The explorer dog should be a one time purchase for 200 food starting in age 1. This should have aprox 0 impact on supremacy outside of a few treasure rich maps.

Some of ideas arent bad, but the explorer dog is a Spain special unit, if you give every nation the war dog you will be erasing one special unit from spain

The explorer dog is available to all EU civs through their respective explorer upgrade cards.
This is a different unit than the spanish war dog.

Some Explorers could use a bit more uniqueness, but there is nothing wrong with them, as they are now.

Even though they are the leaders of the colony, it is regrettable that they did not play much. Maybe cards can be used to make them able to buff units or have better combat capabilities. But I don’t think there’s any problem with the explorer itself.

Similar to arsenals or church cards. Many European technologies/bonuses need at least one card to unlock while other civs (mostly Asian) have access to them by default. That’s also the case for hero abilities.
Balance-wise they are fine because most of these are rarely used.
Design-wise, however, that’s just not fun enough.

I have suggested a couple times to give the Portuguese Explorer a melee focus.
Historical reasoning being that they were Nobility, usually Knights of the Order of Santiago or Cristo and they would not have a musket as a main weapon.

Would be cool if the Portuguese explorer was a Melee unit with a bigger HP pool, and a cool armoured model.
To compensate, he could be much slower, since Spyglass already allows you to scout quite effectively. 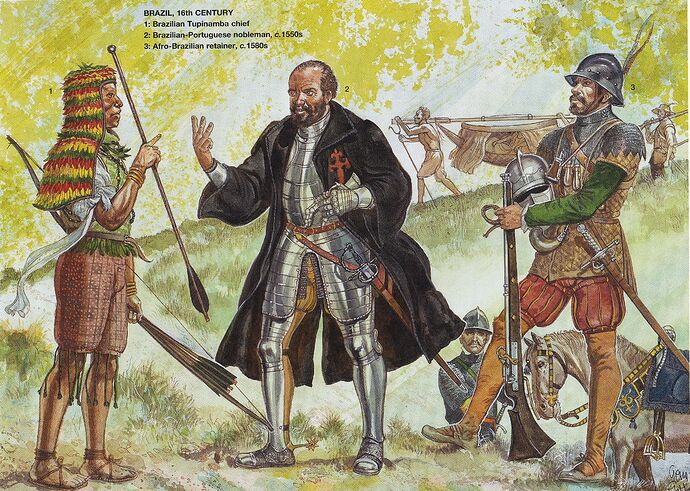 My suggestions: grant each EU explorer a special ability. This ability can be unlocked from a church upgrade (similar to how TAD heroes get upgraded at the monastery).

I think this makes sense in order to make the Explorer upgrade more viable.
I would suggest for these upgrade to BE unlocked with the church unique card.
Common techs to all civs
-explorer combat
-explorer companion

Ports - Bandeirante (adds another explorer at the cost of 800f)

Nobody would ever pay for an Explorer upgrade card.
You just get one unit, when you easily get 5 with 800 resources.

The bandeirante card is a possible card in age II. Hence the cost. I think its way more viable than adding the card to the deck.

Nobody would ever pay for an Explorer upgrade card.

I’m sure he means this to be an upgrade that’s available at TC/Church, not an actual home city shipment card.

I think that improving the explorer cards would be the way to go. But at the moment they are so underwhelming that it’s not viable putting them in your deck.

The purpose of these cards is to make the explorers more effective in combat against normal units, but these cards only give a boost of 50% attack and hitpoints which is not enough to make them stand up against a group of enemy units. They should start by buffing the 50% to 100%. This would actually make them tanky and more of a concern for your enemy. I can actually see this being a strategy in team games where a push has all your teammates explorers in the front line tanking shots and maybe killing one or two units. Of course your opponents would have to counter this by making spies or assassins which would consequently give use to these units as well.

Also, these cards not only give an attack and hitpoint boost but also give a unique ability. These should also be buffed in some way (specific to each explorer) or add another unique ability. The Dutch (build TCs for 300 wood), Germans (build TCs and TPs faster), and Russians (+2 multiplier vs guardians) have the most useless unique abilities and should be discarded and changed to something more useful in combat.

The idea is to make the Explorer cards more strategic, not just stronger.
It should be a valid option, not a must have, for any deck.

Buffing explorers to 100% stats will just make them a mandatory 1st card, since the amount of treasures you would get, would make even the 3 Vills shipment look weak.

What they should do, is diferentiate the European Explorers more. The spanish one already trains Dogs, and has 2 cards to buff it.
Perhaps the Portuguese Explorer could become a tanky but slow melee unit instead, with a 2-handed sword, and the upgrade card lets him deal area damage, for example.
Perhaps the Russian Explorer could be mounted instead, and the upgrade card allows him to recieve shipments, as another example.

Yes, having a +100% explorer in age 1 as a card would surely be broken.
But if you pay a food cost for it, it will suddenly be a choice between getting faster to age 2 or gambling with treasures. The numbers can be adjusted, but I think explorers are most useful in combat in the early game when armies are somewhat smaller.

If you pay a Food cost, it will become even worse than it is now.
Most decks only have 2 Age 1 cards anyway, and they are never Explorer cards.

No will ever delay Colonial or Fortress Ages, for an Explorer upgrade, and by the Fortress Age, the Explorer is irrelevant.

I think you misunderstand the point.
The upgrade shouldn;t be locked behind a card. It should be an upgrade freely available for you to research whenever you feel like it, just like monk upgrades for TAD civs. You shouldn’t pay a shipment AND food to get your explorer upgraded, that would be stupid.

Even then, no one will ever delay Age 2 for an Explorer upgrade, you would just be rushed to death, no matter how strong th Explorer, as it is a single unit without Area Damage.