Hi, I’ve been running some empirical tests on food collection rates to work out how good eco upgrades are and how important good sim city is.

With no upgrades, sheep provide 33 Fmv. With wheelbarrow, they get to 40 Fmv.

Sheep do benefit from micro: when tasked on a building, they will stop about a tile away and require your vills to walk. Here’s two examples of the naive set up, notice sheep are about a tile away from the collection sites and vills weirdly prefer the ger sometimes. 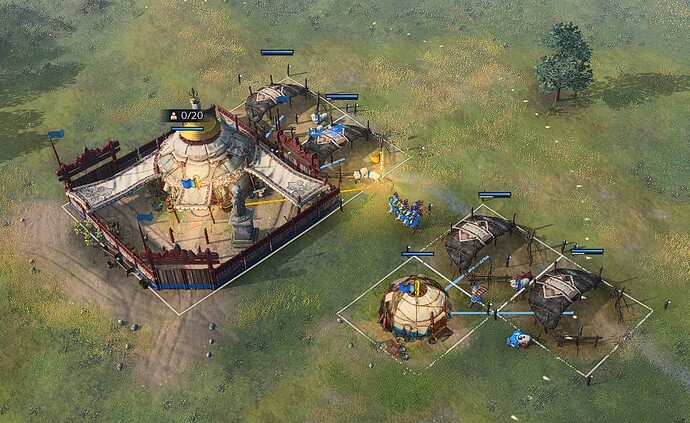 If you micro them properly, you can get sheep to stand underneath a TC’s wings and cut out the walking for free. You can make this micro automatic by rallying the pastures to a building on the other side of the collection site. Here’s the same buildings relocated, notice all sheep are within either the TC or ger, so wheelbarrow’s only benefit is making the drop off animation happen slightly less often, which is barely measurable. 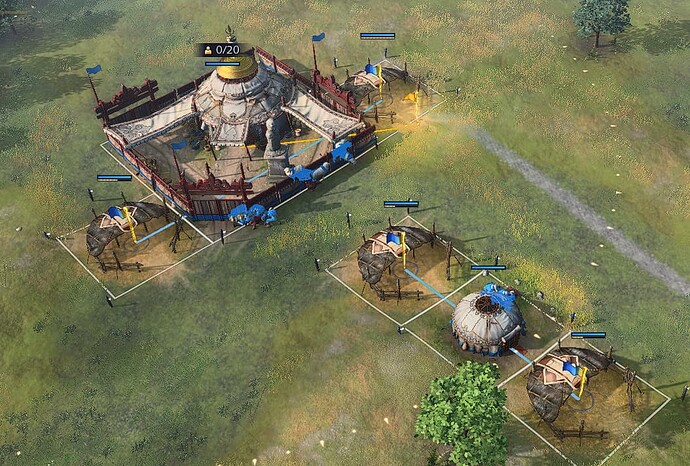 With no upgrades and this sim city, sheep provide 40 Fmv.

You may also have noticed that the animation for killing a sheep is quite long, and some people might suggest microing so that either a single vill or a scout does the killing rather than all 8 vills when the old one runs out. In my test, using a single vill only added 2% efficiency while at no upgrades. This might matter more with full upgrades when breaking sheep is a higher percentage of your vills time, but I don’t think anyone is coming back to do this when late game sieges are going on. Either way, I don’t think this matters very much, but might be something to do in the early game.

On farms, the 8 adjacent to the TC with no upgrades provide 36.8 Fmv. Those familiar with AOE2 might be surprised to learn that wheelbarrow provides an approximately 1% increase to the efficiency of these farms, giving 37 Fmv as well. 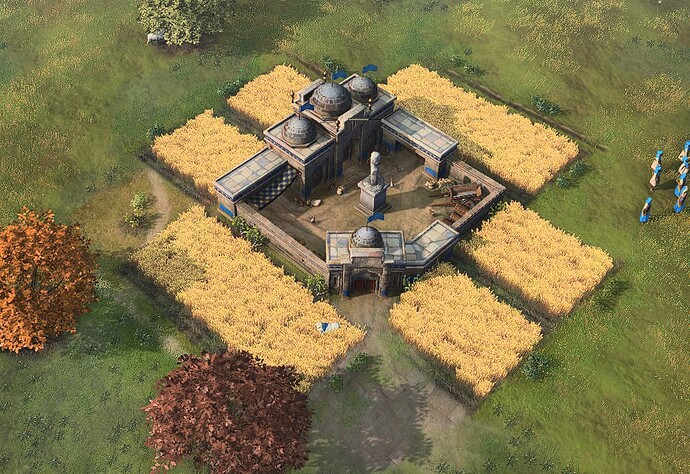 How about the diagonal ones? They provided 35.5 Fmv, which is about 5% worse. Wheelbarrow helps them more, but still not by much, coming in at 36 Fmv. 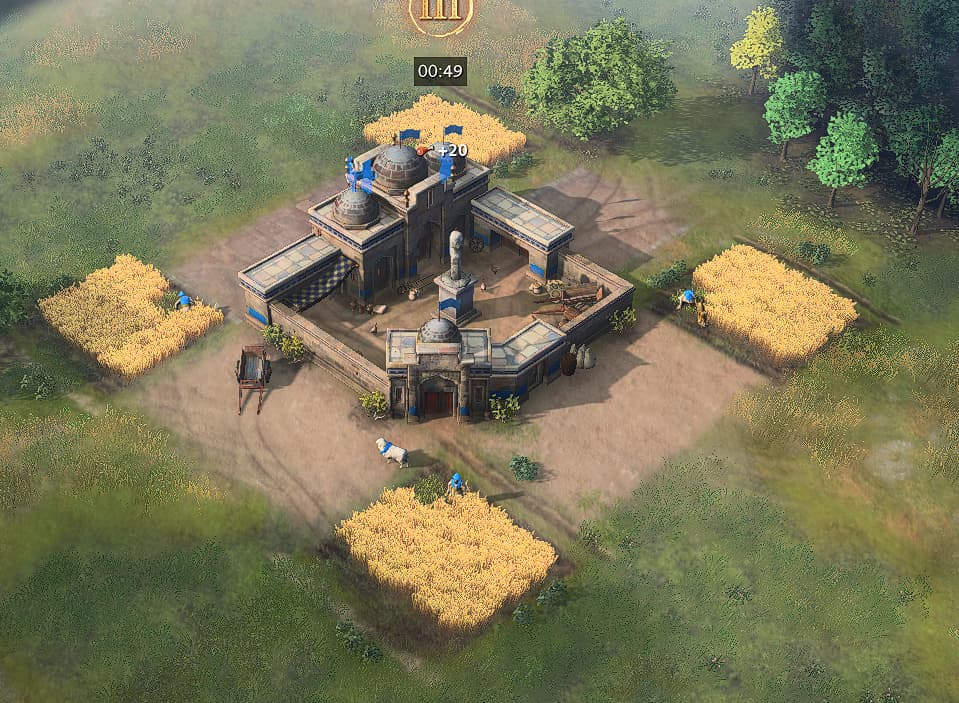 On upgrades, it should be clear that there are bugs in the tooltips: Horticulture says it improves Food by 15%, and the Mongol’s Horticulture (Improved) says it does 15% (which should be 5% more than the usual). But who is right?

By my testing, on both sheep and farms, Horticulture improves collection rates by 10% currently. The Mongol’s improved version does indeed give 15% currently written in it’s tooltip.

Another point I wanted to work out is whether multiple upgrades stack additively or multiplicatively. AKA should 2 10% bonuses result in 1+0.1+0.1=1.2 or 11.11.1=1.21. Unfortunately, between the rates currently being bugged and error due to vill bumping and random walking cycles, I think this difference is too small for me to determine.

Lastly, I wanted to do this mostly to work out whether other civs should want a Mongol ally to donate them pastures rather than using farms. My conclusion is that unless you have a special farm bonus (Chinese granaries and English enclosures) Mongol pastures are about 10% faster food income when properly rallied, and keep your vills slightly closer to the TC (and more likely to be in Aachen range for example) and are cheaper in wood cost to set up, even for the French. It also gives the Rus a 5G/250F trickle for the rest of the game, which is tiny, but better than nothing. The only potential downside is that there’s a 30 total sheep limit, so if someone is eating too slowly it might jam up production for the Mongol or vice versa.

Nice , u have lots of spare time