Pharaohs before and after EE.

In Titans 1.03 you didn’t get another Pharaoh when Son of Osiris was alive. The bug was that, when you turned the New Kingdom Pharaoh to Son of Osiris you can have 3 Pharaohs in the same time, but only temporaly, because the original Pharaoh didn’t respawn. I don’t know, if it was a common strategy to run 3 Pharaohs or turn 1 immediately to Son of Osiris.

In EE Patch 1.9 devs made a terrible choice, they technically added +1 Pharaoh to Osiris. Respawn period starts immediately after a Pharaoh turns to Son of Osiris.

Why? Isis and Ra were already top gods, Osiris was the primary minor god choice for both of them. After 10 years, this was the first thing they do. Buff the top gods. This is what they call “balance”. Great. It already predicted the low quality level of Tale of the Dragon.

The cost of New Kingdom Pharaoh was 300G 25Fa originally. This is what you gave to Osiris for FREE. And it can be researched one more time for reduced price 200G-15Fa.

Egyptians are still in top tier and Osiris is still the most common choice. It’s time to remove this fake fix and fix the real bug: avoid 3 Pharaohs in the same time.

Fortunately I have the fix for the original 3 Pharaoh bug:

After Osiris got one additional Pharaoh: 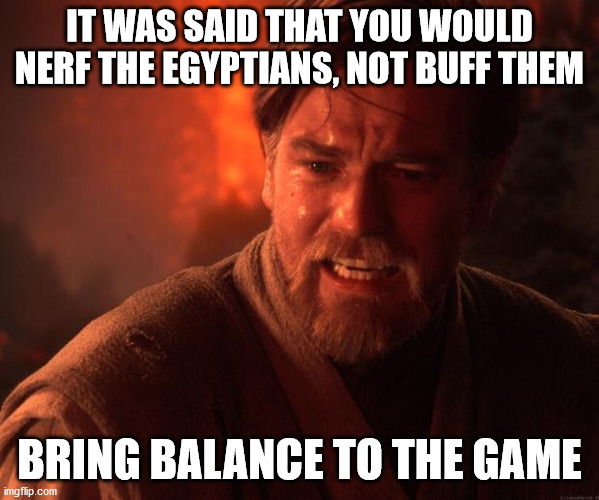