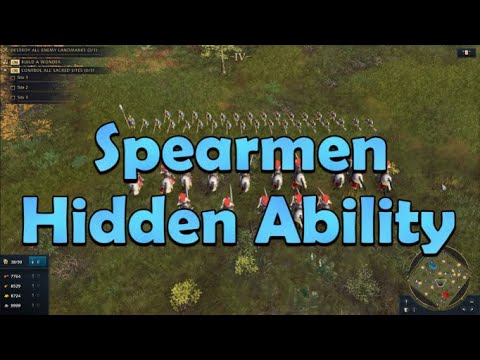 Great video here. A lot of stuff that I don’t think is explained in the game and a lot of people won’t know I didn’t know for example you can brace without stand ground and that knights charging in to braced spears will be briefly stunned (unable to move or attack) and rooted (unable to move but can attack).

it would be fun if this feature becomes properly functioning.

The fact that Spearman don’t do it when you give them an attack command makes it a lot weaker, especially in earl game.
Also the fact that you can bait idle spearman into attacking and therefor not bracing makes it easily exploitable.

The best and simplest solution would be that Spearman always negate the charge whenever the cavalry attacks them form any angle.
And it always stuns cavalry if they do so.

You can still choose not to attack the spearman at all but than you can’t kill them and you have to rely on building other units and not just knights.

I think it’s fine how it is now. Making it always trigger would remove some micro. The only issue is the game not explaining it to the player.

The problem is that it’s easier to micro against it than to utilise it and Knights are already powerful enough.

One thing people don’t know, is that all melee infinity also have the ability to resist melee attacks, being able to not take any melee damage. The percentage is unknown, however it’s apparently in the game.

why are you not getting more likes!! I was wondering the whole time how to ALWAYS DO THIS and I couldn’t bet on it!

no it shouldn’t be completely passive but it should be more rigorous as not to be exploited due to bugs. IMO micro management should always reign supreme!

The problem is that slower units are inherently in a disadvantage in micro.
If knights with micro can always prevent the spearman bracing or just avoid it the spearman can do nothing.

It’s also stupid that if the spreaman auto attack they can do a brace on the move but not if you give them an attack command. That means you have to command them to stop just for a moment to do the attack, that’s stupid.

One thing people don’t know, is that all melee infinity also have the ability to resist melee attacks, being able to not take any melee damage. The percentage is unknown, however it’s apparently in the game

This is a loading screen tip, but I haven’t seen any evidence yet that it’s actually true. Some of those tips seem outdated as well as many tool tips. They really need to clean those all up.

Because it’s not his vid.(it’s waddling duck’s)

On top of this thread is a duplicate. I shared his vid yesterday already

Also the fact that you can bait idle spearman into attacking and therefor not bracing makes it easily exploitable.

You can NOT bait them into not bracing . They will still brace if they move forward of their own accord

Micro should always be more rewarding. Besides the inconsistency on the snare, pike stats / price Vs knights could do with some tweaking, but their actual mechanics are great.