The lack of the guard upgrade is a problem for the late game that can’t be resolved with a HC card, for 2 reasons:

As for combining the steel bolts and heavy paveses, I don’t think that it’s necessary, since the 2 cards itself are really good, and fusing it into a single card it might be too much.

For roman tactics instead I would just nerf the HP bonus, and rework the attack buff, to compensate the addition of the guard and imp upgrades for the pavisiers.

I agree, these two cards are too necessary and only affect one unit, I think they should be merged and given an appropriate cost for Italy, maybe 250 of each resource.

Pavisiers are tough in shootouts even against light siege and can protect themselves for a while if attacked by cavalry, if you mix in counter-skirmishers they win the shootouts easier.

Honestly the only thing they need are guard/imperial upgrades. I think they should be unlockable with heavy parvises like the old Yeomen card was for british before DE.

I still uses pavisiers in industrial age, it’s just when imperial age hits they’re behind 2 upgrades and their bolts don’t do enough damage anymore. But by that stage you’ve already replaced them with those trumpetmen RIGHT?

Something that’s interesting to look at is that the Guard/Imperial upgrades for the Pavisiers do exist in the game files, they’re just locked off in game. But you can activate them using triggers in the scenario editor 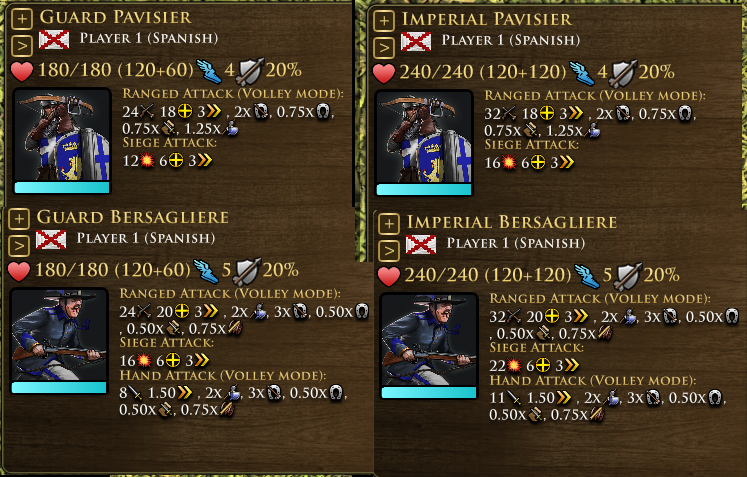 pavi747×477 349 KB
The base stats for the pavisier and the bersagliere are actually almost identical for HP and attack, so guard pavisiers, espeically if you add steel bolts and heavy pavises, actually overshadows the bersagliere, so the devs don’t allow them to upgrade past veteran. I personally would like to see the pavisier able to go guard/imp but you would probably need to soft rework the bersagliere unit because there would be no point in creating them.
3 Likes
Quirriff September 26, 2022, 7:36am #6

Well the damage resist of Pavisiers with heavy pavises make them good also roman tactics give them a good HP boost. But I don’t think guard pavisiers would completely obsolete bersabliere, but they would be more useful especially against counter-cav, but against infantry especially hand infantry Bersagliere are more damaging.

The stun of the Bersagliere is good and since they’re riflemen they benifet from counter infantry rifling, steel bolts just brings pavisiers up to the level of an unupgraded rifleman.

But don’t forget that Italians also have the redshirts card…

I think if the devs don’t want to merge the cards then they should move the Steel Bolt card to Age II, this way you could use the Pavisiers for a Rush and at the same time it wouldn’t feel like mandatory card, plus it’s not a powerful enough card to be in Age III.

Obviously this is just my opinion and I could be wrong.

Steel bolts in age2 would be absolutely OP

That would effectively give Maltese and Italians an age 2 skirmishes that costs only as much as a crossbow.

Steel bolts isn’t an auto include for either Maltese or Italians, after all they both have alternative light infantry by default and grenadiers (For Malta Fire throwers are are skirm/gren hybrids) and artillery.

That would effectively give Maltese and Italians an age 2 skirmishes that costs only as much as a crossbow.

add on to that, an age 2 skirmisher that can also siege from 18 range, bringing flashbacks of incan age 2 kallanka rushes 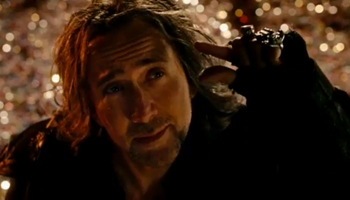