Why are the developers doing nothing about stone wall towers in the feudal age? They see how they are banned from tournaments and decide to do nothing about it. 3 games in a row I got stone tower rushed on feudal age. I am only tempted to do it myself otherwise I have no way to keep playing this game. 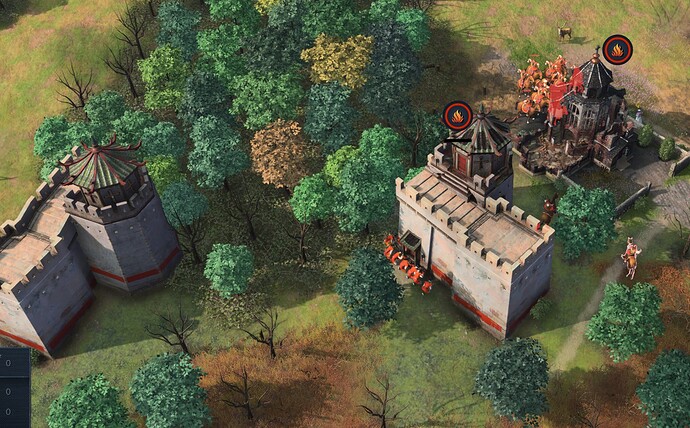 Scouting is the key here.

Without cheese how is China supposed to beat HRE?

Why is HRE only civ that starts with 7-8 villagers at start while other civs with 6?

The thing here is. You can kill stone wall towers from behind by burning them. Seems like you played poorly and got punished for it. This kind of play hardly ever happens anymore because how hard it was nerffed.

I said it 7-8 because im not sure if prelate counts as 2 villagers or 1. If go with simple math 6x0.4 then it would translate to 2.4 villagers so 8.4 villagers at start but im fairly sure its not that simple

Good that you understand what prelate does. It gives 40% gathering speed to workers when inspiring which can be translated to more villagers. 100g is nothing compared to economic boost that prelate gives them at start

You’re missing the point, or being intentionally obtuse. The prelate is as good as having a couple more villagers because it boosts the other 6.

I thought the strat was fixed ages ago.
But apparantly what happens - pro banned it on tourneys, and everyone forgot it.

Also if I recall correctly ban in tourneys was issued before the nerf was made for stone wall towers. Dunno if it was this way but I recall it going that way

Given everyone and their mother are playing HRE now (about 80% of my games last night), seeing them get tower rushed and whinge about it is great fun.

We BBQ rushed the HRE aarcan (which was on wood and gold), went fast castle and stole all the relics in a 2v2 on mountain pass and holy moly was the HRE player raging.

Was great fun. Hope to see more of it.

By bringing back the upgrades they could make them weaker in age 2 but let them scale better into late game. Plus they could balance each upgrade individually rather than nerfing/buffing the whole tower.

Still have no clue why they removed the upgrades for the stone towers. Outposts and Keeps still have them its just weird.

I think it’s because they were kind of terrible. The cost plus the springald upgrade cost just was not worth it.

They maybe should have just tuned the cost of the upgrades though instead of oversimplifying it.

I agree I think it was an over reaction. Keeping them would allow them to balance each tier of stone wall tower. Plus for casual play having those upgradable towers was just fun.