I’m hearing and reading a lot about the preference for random civs during match-making and I decided to mock up a UI re-design which I think gets to the point rather quickly. The feature requested is to have the ability to match make with Random Civ players (or not) and I’m sure there’s a number of solutions to this problem, but maybe this is a start that can help the DEV team build some ideas.

The goal of this redesign is to keep the chat team only, but display our opponents, their civ choices, and Ready status (or not). Phase 1 would be to redesign the UI to display these additional graphics, which are already being tracked at the time of match-making (but not displayed to both teams). Phase 2 would be to add a “Lock” feature which acts as a Ready status, but cannot be unlocked (so you cannot un-ready once you have locked). 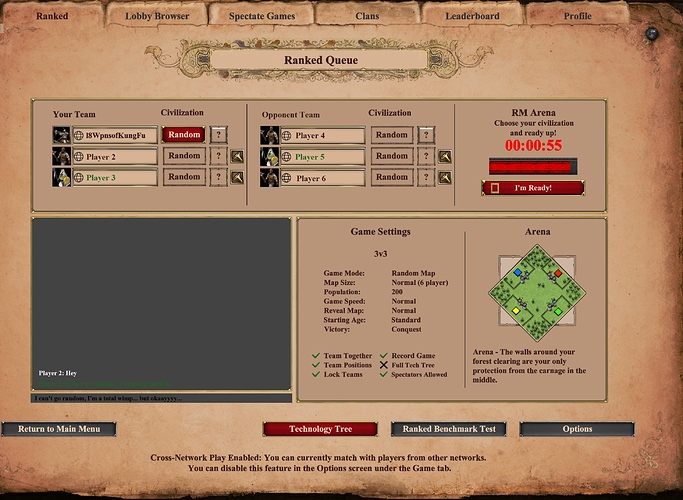 Phase 2 - Once “Lock In” is clicked “I’m Ready” cannot be un-checked and “Lock In” cannot be un-checked. The “lock” graphic by your player name could be used or a button beside the existing “I’m Ready” button. Once locked in the graphic changes for you to a Lock that is closed. From this image you can see that Player 3 and Player 5 are locked. Our opponent Player 5 has locked in for a Random Civ game… maybe we should lock in as well? hmm. 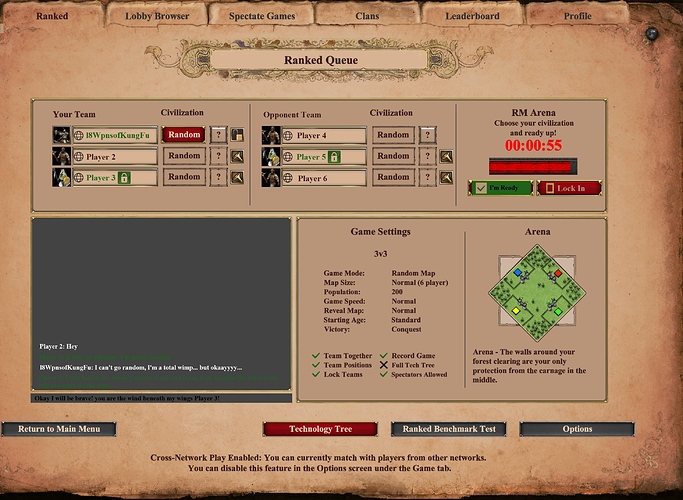 A change like this which allows player to interact more with opposing teams is similar to the old engine in that there would be a sort of honor code of selecting random between players. From here other features could be considered for the game such like Leaderboards or Statistics based upon Random Civ (or Not) selection. If the “Lock” feature were used before the matching screen displays it could expedite the match-making process getting all players into games faster.

I like the redesign, I do think the matchmaking UI needs more love.

I don’t necessarily agree with showing civ picks, unless random is selected.

I think a good compromise would be to show Random, or to show ??? if civs are picked.

This prevents the annoying counter-pick metagame from happening during the ready countdown, with this change, I’m not sure a “lock in” option is necessary, maybe just switch the “I’m ready” to behave like your “lock-in”, and start the game once all players are ready.

edit: This does allow someone to rage-quit if their opponent doesn’t go random with them, which could be toxic, if this gets implemented I would want there to be some sort of penalty for alt-F4ing out of the queue after a match is found.

That’s a good point. We could keep the Civ choices hidden since that is the way the system works at the moment. There could always be an option later to show Civ if players felt it would be beneficial. You’re correct, the point of this design is just to show random and give players an option for random play.

As for rage quitting on this screen, I already have a number of people who do this in team games. I am guessing it is because they are looking at the player ranks (on their team) and deciding if they want to play. If not they leave the game. Also I know a lot of player look up the opposing team and will quit if the ELO isn’t close to equal or in their favor. I had a player yesterday who quit out of the queue multiple times and had a team win rate of 53 wins 9 losses. My guess is he’s very selective. That’s becoming a pretty annoying issue with the match-making for team games so I’d like to see some improvements towards that as well. Like you said, if the queue doesn’t let you back in for a few mins after missing a match-making session then that might help. I thought it already did this but I’m getting off topic. Addressing match-making droppers can be a separate improvement.

Another suggestion is that at the beginning of team game 3v3 4v4, you can choose to be in the middle of the left, middle, right and middle of the team (similar to the way on the road, middle and down the road of the League of Legends) instead of depending on the color to define the birth location of the map town center

I’ve heard of people being against this in general because some civ compositions become really strong when you can choose whether you’re flank or pocket.

One thing to think about when designing a large app like this game is… once the Developers introduce a feature it is generally a bad practice to take it away unless the decision from the user base is almost unanimous against said feature. In other words, What you’ve both been discussing is the fact that with the new “Player color selection” feature the Devs introduced new functionality allowing players to choose Pocket or Sides. I don’t know if this was intentional, but now it is in the game so I know a lot of players are getting used to adjusting their teams to have a strategy in mind with their placement close to the enemy (either support or front). Now taking that away would seem like a step backwards when we all want to have good games. Also, I remember a lot of complaining and rage quitting from games before the color selection feature was added where players would say something like “I’m Berbers right next to Mayans gg!” and quit.

Second thing we’re talking about is that Player color is tied to Team position right now and it really doesn’t have to be that way. Also player colors are divided between teams and that’s not necessarily the best solution either. Many players don’t have a favorite color to select and there can be a balance determined if the colors become shared (to allow Red and Blue and Orange to be selected for the same team like we had in the old engine)… not to mention adding more than 8 colors available. 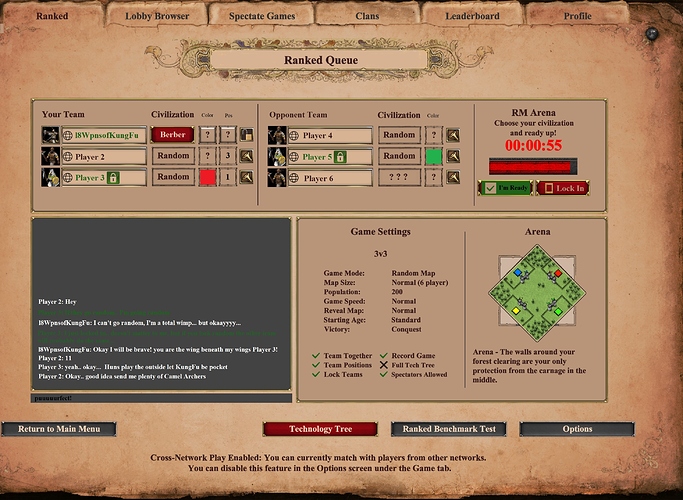 I’m actually not taking much part into this discussion right now but, why is the enemy color pick shown to you? Since colors are locked 1357vs2468 you don’t need that information to decide which color you can pick (and it also makes it so atleast opposing team players don’t need to fight for their favorite colors and also that it is always pretty much clear to you which colors are your allies and which are the enemy). Just asking this to clarify is your suggestion getting rid of this idea and enabling everyone to pick out of 8 colors?

Edit: I’m blind, so you were suggesting that.

Well I hope that already cleared why it’s not a good idea.

I would much prefer a tab to select from 3 pools (as you would select/ban the maps now):

It should be fairly easy to implement and lone wolves from the standard pool can bleed into mirror random and pure random modes. Of course, chat needs to function well for an uncoordinated team to function well. Flares alone may work if you’re dealing with perceptive ppl, but usually it doesn’t.

Yes I was suggesting everyone share the colors but you’re right that we don’t need to see the opposing team colors. Right now we have to fight over 4 colors per team which isn’t as good as the old engine. Ideally we should be able to select between a pool of unique colors per team and if we had more colors to choose from overall that would help. The addition of black from the Spring event is an example that there’s more options to choose from.

Your suggestion makes me think this would split the Leaderboards into Random, Mirror, and Normal which in team games would be 6 boards total. I’m fine with having more leaderboards but we can make the match-making GUI encourage random selection without the split so that’s why I suggested starting here and seeing where it might lead… Radom selection stats/leaderboards, faster match-making, better interactions between players.

It is strong already, having khmer pocket every game is so strong and anoying to play against.

At this moment i see some issues for match making:

It seems like your ideas are also focused on these points, so i agree with those issues. I dont know if i fully agree with al your solutions. I dont really know about the lock in button. I dont really like it. I would add another option to the lobby like picking RM 1v1, RM 2v2, … DM 4v4, you also have the options to select random civ and pick civ.

You need to select at least one option, you can select both options too. If match is random civ, everyone needs to go random (no option to select civ), if you can go pick civ (random civ is an option too).

Most other ideas i do like. Knowing your opponent is great and i like the chat too.

For teamgames and pick civ: You can see civs of ally, not of enemy (maybe you only see hidden civ or random).

A bit more granularity / hierarchy in the ratings would be nice too. Consider this: