Greetings. One feature that I thought would be very useful for the game would be the Strategic/Big minimap featured on Age of Mythology using the Tab key. If you didn’t played Age of Mythology (how dare you, release the flaming camels), this map is invoked using the Tab key and shows (while the key is pressed) a big version of the minimap with emphasis on relics, resources, fortifications and town centers.
Here is the map that I’m talking about: 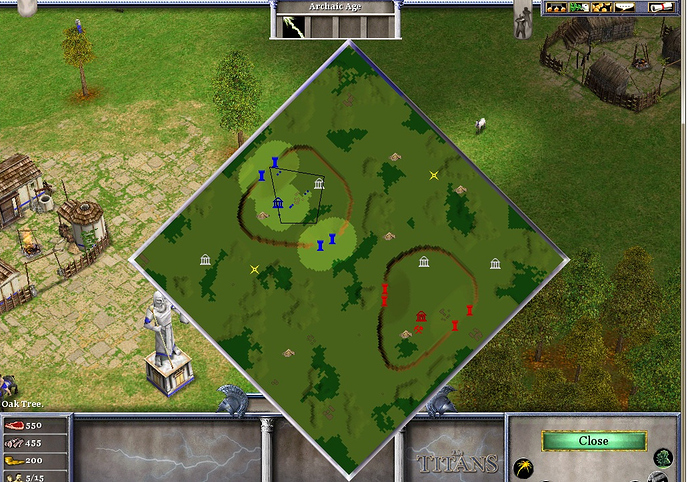 11111035×724 439 KB
I think that this feature is really useful because of some problems inherent to the classic minimap:

Personally, I don’t think is really cool having to lose seconds during a battle trying to look for a stone mine and confuse food sources or items from the grey player. Or having to focus so much to trying to distinguish if that dot is a deer, a stone mine or some stray unit from the grey player (the same with things from the yellow player and gold mines). You should have a very clear view of the thing that is in the minimap. So that’s why the Map from AoM comes in hand.

The strategic/big minimap on Age of Mythology has tiny little dots for units/buildings and special icons for relics, fortifications, town centers, gold mines and trees. I think this could be expanded to include markets, docks, and food sources.

Liking this post wasn’t enough - this idea is amazing and has the potential to take the game to yet another level! I especially like that it takes away the ‘advantage’ that cheap players go for when picking yellow and especially grey (seriously, you want to have your whole empire don the mighty regalia of … faded grey?)

Liking this post wasn’t enough - this idea is amazing and has the potential to take the game to yet another level!

That would be great to have. In my case, I have a screen where the colors are veeery similar and I have a giant disadvantage because of that. With this feature, it’ll better for poor people like me to play in equal conditions.

Yes, you have my total support. Where do I have to sign to support this?
I also really liked who the enlarged map featured more icons to represent different kinds of buildings, rather than just plain dots.
It didn’t hurt the balance of the game and it was nice for the people who used it
I think the minimap of Age of empires 2 could use some care. It is a feature that has not been updated very oftenly in the many years since this game came out

I have purchased all the content since AoE 2 HD came out in 2013 so as to support the franchise so it didn’t go back to slumber, and I would definitely be willing to pay to get me an enlarged minimap with icons just like in age of Mythology

These are the issues I find most infuriating and I think there should be an option to make the mini-map bigger without making all UI bigger.