An idea I had years ago, in addition to my earlier neanderthal Dark Age thoughts, was having Age of Empires be, well, about creating an empire… instead of just a very robust city or small group of cities on a single map.

I remember when I first thought of this, I envisioned you playing your typical AoE match on your typical square map. Beyond the border of your match (in the black), though, there would be fights taking place to your N, S, E, and W. (Maybe the HUD would show you who was battling and winning at the moment on your map edges.) After you win your match, you would then challenge/fight the winner of the match that was going on in one of those directions. Eventually, after several wins, you own a lot more land than just your initial starting square; you were, essentially, building your empire. This was the initial impetus for my more evolved “Defender of the Crown”-esque idea outlined above. However, even that initial idea could be an interesting mode; and could lend itself better to human vs. human ranked tournaments. It is a bit of a tournament tree which already exists, but maybe provides a more visual grounding to it where it feels like you’re expanding your empire; as opposed to just winning a bunch of isolated matches.

Defender of the Crown (Screenshots)

In this map, you are light blue. This is how the map starts in DotC… 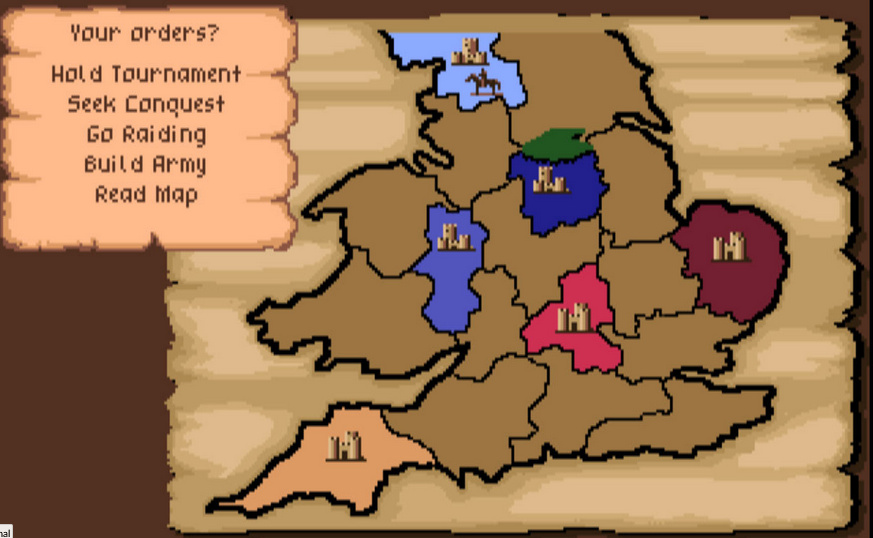 As the match progresses, different Kings in this game attack and gain control of more land. For AoE, I envision something like this civ/color distribution would probably have to be the starting point (territories pre-assigned to something like this): 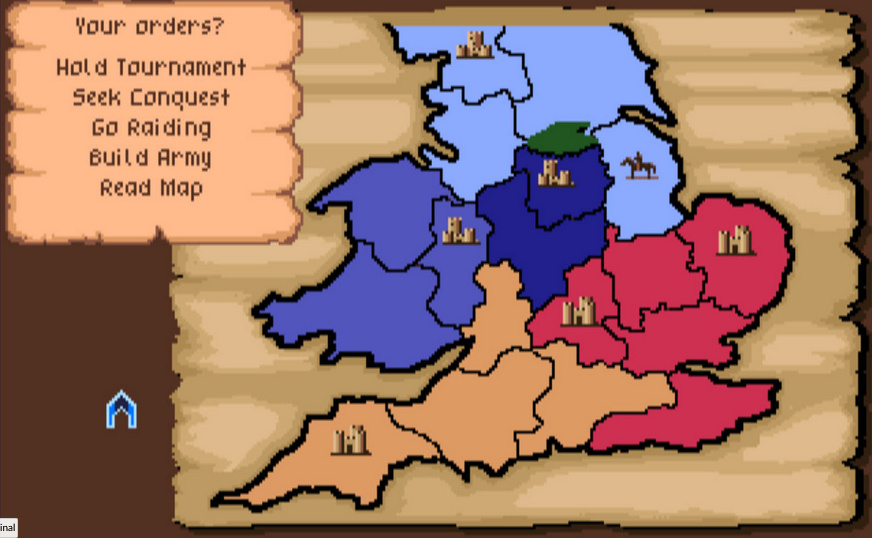 And just for fun, here is a different, non-strategical view of the same map: 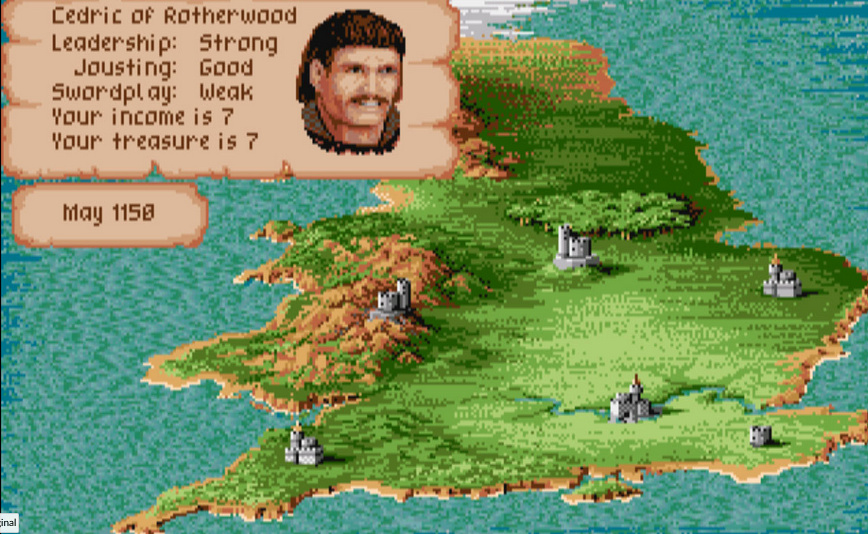 To anyone who read this all or even a fair portion, thank you for your time! Sorry it's so much info. Does it sound like something you would enjoy?

This is fairly simmilar to a Risk map, but on a multiple map scale, instead of happening on a single map.

The problem is that AoE2 scenarios can’t carry info across each and the other, so this game mode wouldn’t be much more than a succession of pre-setted skirmishes scenarios, with a menu interface that paints a map everytime you win one of the skirmishes. The biggest downside to that would be losing one of those skirmishes, as you would need to just repeat the same battle scenario again to move foward

For the general territory battles, those could still be random maps. After all, it’s a big geographic area you’re trying to conquer, so it wouldn’t and shouldn’t be the exact same battlefield every time.

But as for the capitol/stronghold, that’s a good point. So, instead of it being the home capitol that you go for (which, you’re right, would be stationary), how about it instead be the enemy’s leading/major army that is their Achilles heel; and they maybe have a highly unique unit or two. Beat them in battle, you get all their land. This would be neat, too, because that army could be roaming around their various territories, so their unpredictable movement may make it hard to get to them sometimes.

I thought of the similarities to Risk, too. I used to love that game, but didn’t get to play it as much as I wanted.

It bears some similarities with the “Conquer the World” mode from Rise of Nations.
I woud love to see something like that implemented, but with the problems that plagued that mode fixed (IE almost always 1vs1, alliances almost useless, no way to walk over allies/neutral territories to help other battles).

It could also have periods aside from the normal ages of the game. For example, initially you could not have access to crossbowmen, plate mail or gunpowder units even thoug you could access to the Imperial Age.
You could also send or receive reinforcements on batles/sieges. Let’s say you are allied with the Italians, then you could receive in some battles an allied italian camp, or their team bonus.
Different modes like Siege(capture a city/capture the relics), Battle (only troops in terrain according to the region), Defend from a Siege (prevent your wonder from being razed).

Good thoughts, Hectornauta. Thank you! I forgot Rise of Nations maybe had a similar mode; I will look into that, out of curiosity. Been a long time since I played RoN. Wasn’t really my favorite RTS game

Good point on 1v1 all the time. There’s got to be good ways around that, like examples you gave. And the enemy AI could get the same. I’ll have to ponder that one a bit, though, as you’re right… 1v1 all the time might get kind of lame. Like you say, allies on your side or enemy’s side could help break up that monotony.

Periods … (in-between Ages)… would be cool. I’ve been saying before that “sub-Ages” would be awesome to have in AoE, and I really hope they do so in AoE IV. I think maybe “periods” would be a better naming choice than “sub-ages”; more official. Nice!

I have made something somewhat similar to what you have asked. A map called Europe Diplo Zone Kings in which you need take control of outposts on the map to get resources and population. It’s also regicide and diplomacy.

Sadly, DE sucks really bad with maps so I have not put the latest versions on DE.

Looks like a lot of work there. Very nice. It reminds me a little of a campaign mission I played in DE once. Might have been one PhillySouljah released when DE came out or it was included with the game… where you go around defeating various outposts. Definitely not as many as you have, and that campaign wasn’t really about conquering land. I think the outposts (clusters of a few units) were just there to harrass you as you made your trek across the land