I often play 2v2 with my old buddy. We’ve been playing for 20+ years now. As the game has become more complex (and we’ve gotten more forgetful), I find it harder to remember exactly what team bonuses are available to us. This often is the difference between winning and losing (at our level)

Is it possible to display team bonuses for all civs on a team in the tech tree?

Have I posted this suggestion in the wrong place - or is my wording unclear?

For example, in the above screen shot, in a team of 2, I should be able to see both mine and my allies team bonuses - not just my own. I’m a little surprised this hasn’t already been implemented.

It’s a good suggestion. Maybe the tech tree is not the perfect place to it, but could make sense - specially in 4v4s.

And please, don’t get mad at mopesteer2710. Even more cancer isn’t needed in here.

Thanks for your comment. I think there’s enough room for it (as pictured) - imagine you’re in a 4v4 game (or 3v3 / 2v2) and you want to see what team bonuses are juxtaposed to help inform your strategy for the (late) game.

I’m still learning the new civs, and getting to grips with changes to the fantastic updates that are rolling out monthly. Often what I’ll do is, once I’ve set my vills to task in early dark age, review the tech tree before adapting my strategy to suit.

Instead of using the tech tree, I would like it as a tooltip when hovering over the scorepanel (as in, you hover over someone’s name/civ/icon in the scorepanel, it would display their team bonus as a tooltip).

That’s a good idea, too. Is there any other (constructive) feedback from the community? I’m really hopeful that something so simple, yet significant can be implemented sooner rather than later.

Or solo and team bonus

I don’t know if thet tech tree is the right place, but I think it’s a very good suggestion, especially for beginners or people coming back to the game after a long time

Does anyone know if there’s a way to tag a mod, or to better flag this in an official suggestion discussion?

See you all on the battlefield! Looking forward to June.

Just thinking about this a little more - yes, I think this idea is better as it would allow for players to also view their opponent’s team bonuses.

Just played using the latest update (July) and seen a lot of good changes. Unfortunately, there hasn’t been any changes regarding this suggestion

You’re in a 4v4 and it’s evenly matched. Everyone makes it through to post-imp and an intense battle is being waged. Behind the battle lines, trade carts are running back and forth, keeping the economy going. There’s still plenty of trees to cut, but it seems as if there will be no end; just as soon as one team makes an advance, they are repelled and vice versa. What will it take to turn the tide in your teams favour?

Answer: Knowing (quickly and conveniently) what all the teams (that are currently being played) bonuses are (for both your team and the opposing), so that you can fully leverage these in relation to your overall military composition.

I think the tech tree is fine. However, one place where I think displaying team tech bonuses is the loading screen. There’s a lot of space near the top of the main logo to display your civ bonuses and team bonuses, which I drafted a rough example here:

loading_screen_techs1920×1080 653 KB
While I think it’s your own fault for picking a civ and not knowing its bonuses, having this would be helpful for games involving random civs. I used the same font from the tech tree and you can see how it can roughly be duplicated over quite easily. I think there’s not enough room to display all the bonuses. It’s a little small and hard to read and looks odd. I think you can remove the civ bonuses and at least put all the team techs there next to the players
4 Likes
memphisbelles July 26, 2020, 5:31am #17

Thanks for your response. I agree, it would be easiest to just learn the team bonuses and what not. In all honesty, I know most (all?) the original civs but am still a little patchy on some of the newer ones. I always play random civs.

Displaying the unique techs only would be best, and is what I originally intended, either in the loading screen as you’ve suggested, and/or possibly as a tooltip when you hover over that player on the score (when it is being displayed).

I would love it if this QoL feature gets added. It will be very useful. Knowing the team bonuses without having to go through tech tree of all the allies will be useful as remembering team bonuses of 35 civs is not possible for everyone.

Loading screen is good option to show the team bonuses. Maybe, the bonuses your team has and opponent team has can be shown when you hover mouse over the crest symbol of the civ.

I find it harder to remember exactly what team bonuses are available to us.

heck it would be great if the loading screen actually gave more info, like each opposing civ had a window with the tech tree bio in it ( eg huns would show the free houses, cheaper CA etc)

Loading screen idk, but a little box with: Stables work faster (Hun Civ Emblem) … would be beginner friendly I think.

A bullet point version of what bonuses your team provides could help nudge beginners towards most viable strategy for the team combination. Showing enemy team bonuses could also help them decide how they would want to prevent their opponents from using their bonuses efficiently, I can see this change improve gameplay of many beginners.

I agree. I’m glad to see that others share the same or a similar vision to me. Is there any other way we can promote this, so as to grab the attention of the dev team? A number of viable solutions have been offered, I’d like to see some follow-through now.

I just released a new mod which participants of this thread might find interesting. It is called “Civ Techs In Tooltips” : https://www.ageofempires.com/mods/details/17114/ 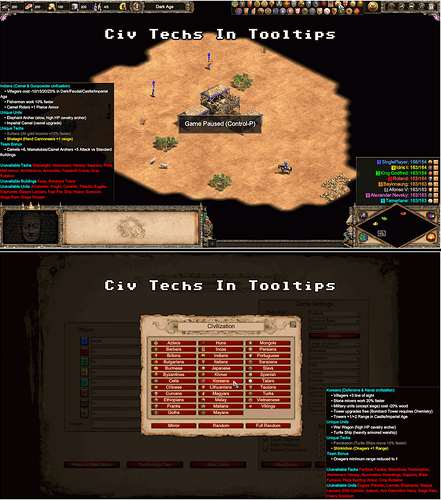