[Suggestion Lobby] Lobby with afk hosts should be cancelled or (discussion)

There isn’t a proper way to know if lobby host is afk so i suggest some message confirmation after a while (5-10 mins) that asks the host if he/she is still there and if the message isn’t confirmed within 30 secs, it cancels the lobby. The numbers can be tweaked of course. Maybe deactive this function for password protected lobby is also another option.

With more discussion, came out that cancelling might be a bit extreme so with @DankSulphur ideas incorporated, here is another option

Like Waits 5-10 min, sends a confirmation message to check if the host if afk and, instead of cancelling the lobby, it shows the icon “afk host” on the lobby browser. Doesn’t change much for me. The icon disappears as soon as the host confirms he is there.

That one is good suggestion but it needs to alert host to with countdown.

The problem is that Aoe2’s sound doesn’t work if the game tab isn’t active.

I sometimes have to wait for more than 30 to 40 minutes to get a full lobby (or even start to fill up the lobby) on certain game modes (diplomacy, custom maps), and I tend to alt-tab to do something else, checking on the lobby every 5 to 10 minutes to see if people have joined.
So, please no

Every 10 minutes seems fair. And if you aren’t afk or alt-tabbing, it is easy to click ‘i’m still here’. There were 2 lobbies yesterday with afk host. And people (I was also there but happened also in the past) kept joining that lobby. And then those people had to wait for the lobby to fill up only to find out that host was afk. And then again, they quit but other people entered. How much time lost for everyone?

Just because you have to wait for 40 minutes for a custom made map (i’m not entirely confident it takes you 40 min), it doesn’t mean you can’t think of others. Sure, you can expand the confirmation message to 2-3 minutes so you have more time to confirm but not straight away throw a possible solution for a real problem.

Taking into account your own problem. Imagine you entered a custom made scenario (host isn’t you) and because it took you 40 minutes, you think it will take 40 minutes to fill up. After that time, you find that the host is afk.*

*We consider in this example the people who entered to all have the files to play the custom made scenario.

Alright, first of all, how could you define host inactivity ? would it be that the window is out of focus ? no chatting ? there needs to be a proper way to see if a host if really afk or is just sipping his cup of tea in front of his screen, waiting for the lobby to fill up while reading the banter between players.

And if we could see if the host if really afk, I’d rather take a different approach to that problem

Rather than having the lobby close after 5-10 minutes of host inactivity, have an icon pop up next to the host name that shows that he’s afk (a “zzzz” icon or the like), that way players can make the decision to wait until the host comes back or leave, and would eliminate any unintentional deletion of the room.
Don’t forget that sometimes the host will also deliberately go afk (for any kind of reason), and say it to the players in the lobby, but the automated system wouldn’t necessarily pick that up.

Imagine you entered a custom made scenario (host isn’t you) and because it took you 40 minutes, you think it will take 40 minutes to fill up. After that time, you find that the host is afk

I fortunately never had that issue, but I see where you’re coming from. Hence my suggestion above. Alert the players that the host if afk instead of outright closing the room.

i’m not entirely confident it takes you 40 min

I can assure you that on a weekday at 15h, yes, it takes forever to fill up a custom map lobby

Even during evenings, it can take some time, usually between 5 and 15 minutes.

There’s a checkbox to enable this in the audio options: 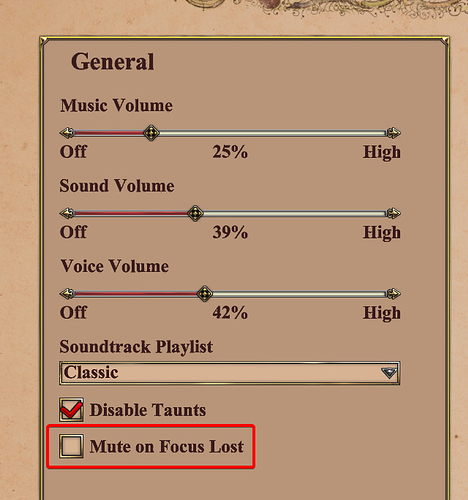 Oh thanks, didn’t know that. Then, yes before cancelling, it could play a sound.

Like Waits 5-10 min, sends a confirmation message to check if the host if afk and, instead of cancelling the lobby, it shows the icon “afk host” on the lobby browser. Doesn’t change much for me. The icon disappears as soon as the host confirms he is there.

Is this really necessary?

Whenever I join a lobby, I send a brief greeting in the chat. If no one in the lobby responds, and there isn’t any movement for a good 30 seconds - I leave and find another lobby.
Except for very rare occasions, finding a lobby with an active host is a very easy thing to do imo. And on the off chance that I can’t - I just host my own lobby, which fills up fairly quickly.

If this is an actual problem for a large number of people - I think Voobly’s solution would be sufficient (If a user has been AFK from the lobby for an extended period of time - an AFK notification appears beside their name for others to see and be aware of).

Other might asnswer you in the lobby, the problem is if the host is afk. And it isn’t one time thing as other people than you might join and not check anything or they wait and check or they wait till it is full to realize that host is afk.

Then… another problem is that it continues like this because the lobby remains there.