Suggestion: to decrease the curve/parable of arrows fired

This game is beautiful and amazing in many ways… Though, one thing that bugs me is that arrows curve themselves down too much before reaching their targets. An arrow’s parable isn’t that huge when firing it with a bow. 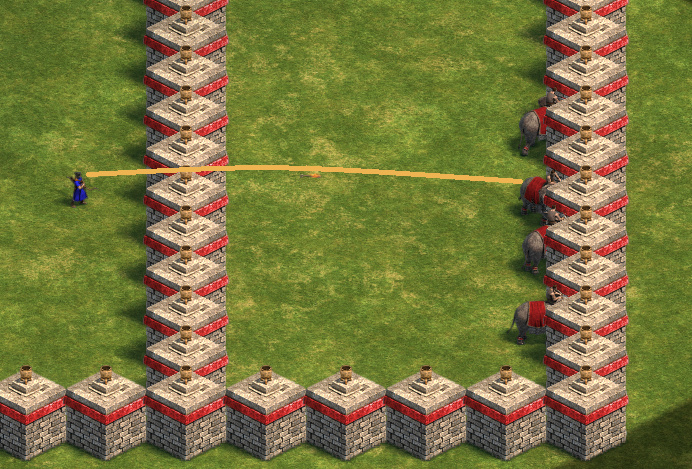 This shouldn’t be hard to fix, right?

@PeakHornet46539 do you have the SLPs to convert into Aoe2 DE?

If this idea turns into a mod, then it would be nice! Although would be even nicer if it was official, IMO.
It’s too exaggerated as of right now. I wish the curve was a little bit less noticeable

I don’t really have any other complaints other than that tiny graphical issue.

even nicer if it was official

I agree to what you want to say. It felt weird to me as well, the way the arrow turned down at the end. It is visible for Tower arrows as well. The arrows feel like revolving at the end.

I wish the curve was a little bit less noticeable

as if someone is throwing the arrows out rather than shooting them with bow.

rofl. well in reality Im guessing they wanted people to realize harbor is actually a really tall building. but its like arambai throwing darts

Arrows travel with a smaller curvature when it’s a shorter distance. That’s also what the OP’s video shows. If you recall, many movies depicting ancient sieges have scenes like this: https://youtu.be/q5S2cc8ZNTo?t=104 where archers would shoot in an upward angle, when it’s a long range. I believe devs take this fact into consideration and thus the following game logic:

Archers, with a short range, have an almost straight shot (and their projectiles always feel faster). Xbows have an obvious arc, but still reasonable imo.

Longbowmen, who are supposed to be long range specialists, have a super high release even at the same range with xbows (https://youtu.be/FBtIJ3ETELs?t=226).

Although it will serve to make Crossbows only even more OP, which is why unit balancing is most important.

I think this will need a Data mod

Unfortunately the recent update of AOE1 DE seems to have broken compatibility of the graphics extraction tool for SLPs from AOE1.

I feel like it is for visibility. For example when there are a tons of arrows and units under those.

I don’t think so. Arrows still cover a portion of the screen, no matter where they are. The screen is going to be blocked in any way, no matter how arrows fly.

it will serve to make Crossbows only even more OP

I’m not sure I understand this. Decreasing the parable won’t make units shoot faster IMO.

Exactly, my friend. At a distance, arrows do have a much more noticeable curve while in the air, because of physics.

Hilarious! Didn’t know that (I don’t play AoE2:DE but the prequel

as if someone is throwing the arrows out rather than shooting them with bow.

Yes. Slower moving projectiles actually bend more while in the air since gravity affects them more. This can be easily tested with a pencil, or a small stone.

But they don’t block the main portion of the area you are viewing.

Arrows aren’t obstructing much tbh, and they don’t hide your army nor your target, which are the things to look at anyway.

You guys serious? The arrow physics in the original AOE looks terrible in coparison to AOE2. Specially when you are firing over a wall. Arrows do curve over long distances, its just that in AOE games scale has always been not super accurate so everything is just more of an abstract representation than a 1:1 model of reality so the artists have taken liberty with things and considering all this I think the AOE2 arrows generally feel and look more realistic. You just gotta kinda imagine that they are firing over a longer distance than they appear to be in game.

abstract representation than a 1:1 model

Exactly this. aoe places “fun” over realism in almost every aspect of the game… Curved shots from archers look more dynamic than flat trajectories

Yea the flat trajectories always reminded me of games like Diablo or other ARPG games where the archer character is generally shooting over small distances. I am fine with it in that context, but to simulate the feel of big battles over large battlefields the curve of the arrow is actually much more convincing.

I appreciate the look of nicely arcing arrows and hate it when games make them more realistically straight. Why? Mainly because it’s a video game and I enjoy the feeling of medieval it brings me to have this. With straight or straighter arrows, it feels more like bullets… which there are more than enough games that have those physics already, imo

It’s been some weeks, and I think projectile trajectory was reworked (?)

I mean, arrows don’t look bad at all here: https://youtu.be/uwMsb4Gx-N4