The 5th resource and build limits

Aoe3 came out when I was a teen. Like many other aoe2 fans, I was excited to try the latest game in the series. More recently, I picked up the aoe3 DE and completed the 50 states challenge. This has caused me to reflect on a little-discussed game mechanic that turned me off of aoe3 all those years ago. No, its not the 3d, the time period, or even the home city cards. What got my aoe2 panties in a knot were building limits.

I was not good at rts games back then (I’m still not good). To beat higher difficulty AI I used to spam towers near my town center and bait the AI units into chasing me until I was able to raise my late-game army. As a player who relied on tower cheese, I was dismayed to find a build limit on towers in aoe3. There seemed to be build limits for most everything. Towers, army, villagers, hell, even some ships had build limits. It seemed clear to me that the game was designed to be played “the right way.”

In addition to build limits, it was also frustrating that certain units cost multiple population points. I’m looking at you saloon/tavern/pcName2.0 units. I mean, I get it, population is the “5th” resource, but this was something that never seemed…fair? No, it might have been fair, but it didn’t feel fun.

One of the great joys of rts games is mobilizing your macro and economy to produce certain units/military buildings. If someone wants to build 100 of the same building or unit, the game should let them, provided that they can pay the price in food/wood/gold. Even if a dumb kid can only win by spamming towers, if they can mine the stone and stay alive, let them build! In a competitive environment, spamming one building or hundreds of the same unit shouldn’t win, because that’s bad strategy. However, not letting a player do so simply limits the strategies of all players.

I understand that aoe4 will have fancy unique buildings needed to advance in age. Those makes sense to lomit to 1 (except for china of course). My concerns are focused on the other more common buildings and units. I have a fear that aoe4 will feel like bowling with guiderails. Can aoe2 players imagine a version of the game that doesn’t “let you” build 100 persian war elephants, simply because they cost 6 pop each or the game arbitrarily caps you to recruiting 10? To me, that’s just poor game balance. In a competitive multiplayer match, that many war elephants take too many resources to produce. They’re also too slow to control multiple key areas of the map and they can be out-micro’d. Sure. But, what about the kid playing against their dad who both…suck. They wall and boom for hours and build up mighty armies of expensive unique units before finally clashing. What a game!

I’m not exactly sure how to articulate my concern. When I was a kid without real strategies or build orders, aoe3 felt so restrictive compared to the previous games. It was almost as if the devs built in someone to hold my hand and show me the “proper plays.” I instinctively ripped my hand away. Instead, I returned to a game where 1 pop meant 1 pop, buildings were as plentiful as the lumber and stone they were derived from, and I was free to live or die by the strength of my own terrible strategies. Live free or die. I died a lot in aoe2, but the game let me try nearly anything. That’s what made it great. I hope that aoe4 will also feel like a world of possibilities. Let us build 30 towers. Allow me to build a fort or castle near my enemy’s starting town center. No, 100 war elephants probably won’t be the top ladder strategy. However, most age players starts off as a noob that would be thrilled to win against the AI by any means necessary, cheese or no cheese. I think letting aoe players color outside the lines of the meta is an integral part of the series. Strategies that win against AI but loses to human opponents help craft new players into better strategists and helps them feel growth and mastery as they improve. Bulding limits (or non-age up buildings) and varying population values for units hinders this progression. Let us spam against the AI and noob friends, and let us die on the ladder because spam is typically bad strategy. Good rts games allow for both experiences.

As a side note, aoe3 is a hidden gem in its own right and it’s fun to play these days. I’m not trying to start a comparison thread between 2 and 3. Instead, I’m expressing how strange it felt to feel restricted in a series that had always given players so much freedom. I encourage other aoe2 players that picked up 3 DE as well to give the game a try some afternoon.

i think that population balance absolutely is a must in a modern RTS game.

like it is IMO terrible game design to have art cost the same pop as an infantry unit, and it ends up with weird balancing like you see in AOE 2 where a mangonel can take out 10 guys in a volley instantly making the unit worth itself several times over. the way it is then “balanced” is by having you be able to micro your way out of that but frankly that is a silly gamedesign and really not how unit balance should work, not to mention it just doesn’t work with cannons the same way. if not for the population difference then the game either would turn into artillery spam late game or artillery would have to hit like wet noodles neither of which seems terribly fun to me.

i will say tho that some of the tavern units might indeed have a bit too much population cost, like i dont think anyone ever use the outlaw units even with the USA.

as for towers and why they are limited then you have to understand some of the game issues that AOE 2 have, it is a very slow game because stalling with defenses is so effective, its nearly impossible to get through walls until you are castle age and then you have to deal with castles etc.

you also have to keep in mind that AOE 3 has much faster pace because resources are easier to get and units train faster, even ignoring any HC. while making an army of 100 elephants in AOE 2 might seem ridiculous that is a distinct possibility in AOE 3.

I was dismayed to find a build limit on towers in aoe3… In addition to build limits, it was also frustrating that certain units cost multiple population points.

Yep, agreed. I stopped playing AoE3 because of all the restrictions and guides forcing me to play how the devs wanted me to play rather than allowing me to play how I wanted to play. You couldn’t even seal off the side of the map with walls and such in AoE3

pretty sure they insta kill cavalry as well.

They can’t if you don’t have a big mass of them but at that point they have the risk of destroying themselves. I actually think that siege is fairly balanced in AoE 2.

from the outside it looks fairly unbalanced. that being said regardless of everything else they needed to be balanced different for AOE 3, since art works fundamentally different in that era.

Cavalry are much faster than mangonels, and enter their firing radius very quickly. Once inside their radius, it’s game over for the mangonels. And like EgoTonic said, if there’s a big mass of mangonels, then they’ll start firing on themselves to try and take out your cavalry; thereby destroying themselves in the process. I don’t think siege is unbalanced in AoE2. As with everything, you just have to know their weakness or their counter units

I am curious did they say what resources were in the game to collect?

Resources is a relevant think. There are obviously 3 type of resources. Food, wood, gold. Except for that there is also the population as a resource, which you collect by building houses. Someone else would say that relics is also a resource. In AoE4, at least for some civs, I have the opinion that relics will be an import part of their strategy. (I don’t know that mass convert is for all civs or only for Chinese and each civ has different bonuses via relics - or at least some). So although the resources are 3, in a more general way we have 5 resources.

Every Age game has four resources, and AoE4 will be no different. See the lower left corner for the Food, Wood, Gold, and Stone icons. 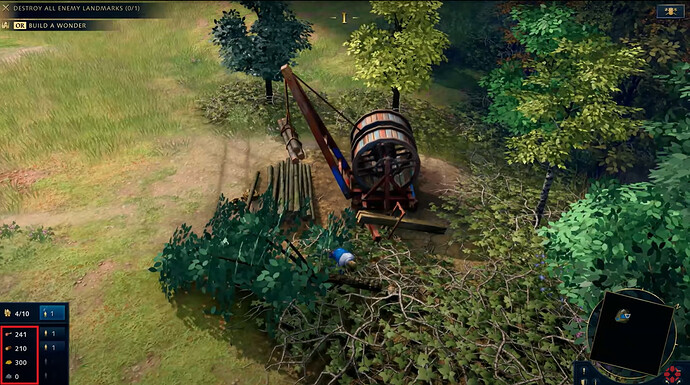 I forgot the stone… great. And officially I have lost my mind

like it is IMO terrible game design to have art cost the same pop as an infantry unit, and it ends up with weird balancing like you see in AOE 2 where a mangonel can take out 10 guys in a volley instantly making the unit worth itself several times over. the way it is then “balanced” is by having you be able to micro your way out of that but frankly that is a silly gamedesign and really not how unit balance should work, not to mention it just doesn’t work with cannons the same way. if not for the population difference then the game either would turn into artillery spam late game or artillery would have to hit like wet noodles neither of which seems terribly fun to me.

Have to say, the siege balance in aoe2 by far the best balanced siege I’ve seen in any aoe game, they’re just the right costliness, they have specific functions and counters, and massing them effectively is far harder than massing horse artillery in age3 for example. Cannons in aoe3 feel OP in general, even with the pop nerf. Whereas you can make 50 mangonels in aoe2 and they feel about as powerful as they should be for their associated cost and usability. You actually get far more use out of ~10 onagers than any more, as it becomes useless overkill that you pay for in resources, and ultimately hurts the army composition. The game manages to balance them somehow without an associated pop nerf.