Okay, technically this screenshot is just from a new try, as I had gotten to the 100 vils, had a university and monastery down, and was about to click up with like 5 seconds left to get gold only to find the research missing still which was very sad and made me alt+f4 which I realized a second later was a bad choice haha.

I’ve updated to the latest February patch, but I’m still running into the same bug where I can’t click up with monastery and university. I have to build a castle in order to advance to Imperial.

Art of War scenario Booming has no button at the TC to advance to Imperial, even after building a castle, castle age buildings, etc. 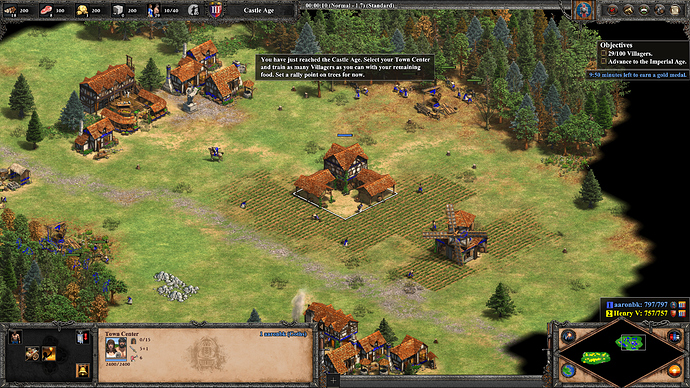 This is not a bug. Age up is only available when you meet other requirements: you need to make 100 villagers first.

Having two castle age building being not enough (must build castle) is bug though but it’s separate issue.

This is not a bug. Age up is only available when you meet other requirements: you need to make 100 villagers first.

Button should still be shown, displaying requirements for clicking it

No this is same for all art of war missions. this is because otherwise could press to advance before they got requirement set by mission and because of that fail to get any medals.(it takes a long time to advance and it’s meant to be last thing you do) 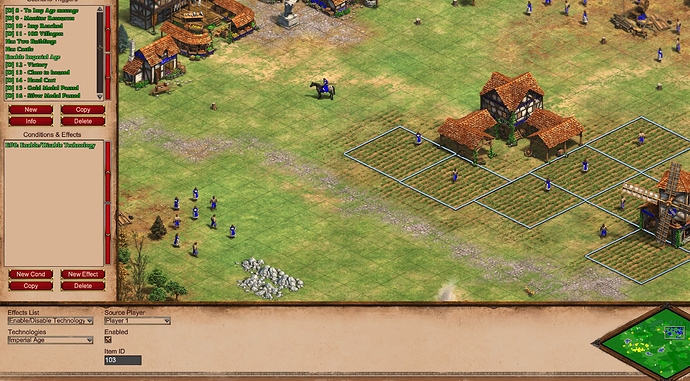 As you can see from trigger list It’s clear that it’s intended. Has two buildings" and “Has castle” triggers both enable trigger that allows you to see imperial age tech in TC. “[D] 11 - 100 villagers” Trigger enables these two

“Has two buildings” trigger is not working properly so only “has castle” trigger works.

I am not sure how these triggers were made originally but by current set up i don’t know how it could work.

7 weeks after the initial bug report, and this is still happening.

As per screenshot I have 100 population, monastery and university; a lot of wood and gold - Imperial Age button is still not there

Btw. I also noticed that similar bug was communicated as fixed with update 34699 (January 21st, 2020): " ‘Booming:’ Fixed a rare issue where the Imperial Age upgrade could not be unlocked." So the current bug may be regression, that reappeared and still needs to be fixed

building standard Castle age buildings does not trigger imperial age-up button; building a Castle does.
Both cases were with enough resources for the age-up, and 100 vills.
This makes this mission a lot more difficult (I don’t mind, but I just don’t think this is how it is supposed to work)

Hi @AntiBanaan, This is a known issue.

Booming: Players can now properly advance to the Imperial Age after building two Castle Age buildings, rather than having to build a Castle.

Tested on my PC, it’s working!