There was a time when I installed the free demo of AoE I provided with my windows 98 Cd and had no idea how much I’m going to love this series. AoE2 was my true 1st love though. I tried all the different civilizations just because of their unique Castle units. But then AoE3 introduced something very spicy especially with the DLCs and that made me reconsider my love priorities. That was the inclusion of more asymmetric civilizations.

Ever since I’ve learned that all the civilizations in AoEIV are going to be unique in almost every aspect of the game, I’ve become super excited. The series has taken a route which I think will make AoEIV the best in the series. It will also open the way to even more powerful DLCs as mere inclusion of a single unique civilization can make a huge difference.

I’m happy that Microsoft has finally decided to give it’s legacy game the attention it deserves.

Where did you see that the civs will be “unique in almost every aspect of the game”?

From the revealed information I’ve seen that Civilizations have many unique units, unique buildings, unique way of learning technologies, unique way of handling conflicts so I deduce that every civilization will provide a unique way to play the game.

The civs will not be that asymmetrical. It is imposible to have more than 3 truly asymmetric armies in the Middle Ages, almost everyone used the same types of weapons, or close analogues.

Yes this is true, but would it be possible to have varied stats?

Hypothetically, Rus’ have stronger pikeman than HRE historically, they both get the pike bbut Rus’ pikes will have better stats + their different skin.

(also I hope there is no generic ‘knight’ unit again, it is possible to have many knight type units in different civs).

The upgrades could also be asymmetric

The Swiss Pikemen (HRE) were the bet in the world.
It is possible to have somewhat of a stats divergence, but everything must still fill it’s role. so the stats would never be that different.
For example, a Pikeman’s HP or Armour can only be so low, before it can no longer actually oppose Heavy Cavalry.

The Swiss Pikemen (HRE) were the bet in the world.

I think for something this different they would just do UU but who knows. Honestly I expect plenty of UUs, especially for civs like Rus’ who were very different from the Western Euro armies.

On the civ info page, for Mongols we see some of the obviously unique units aren’t listed, so i do hope there are many more.

For example, a Pikeman’s HP or Armour can only be so low, before it can no longer actually oppose Heavy Cavalry. 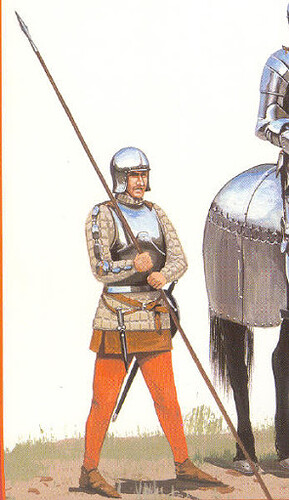 image296×512 56.2 KB
Yeah he would die pretty easily against a fully plated rider if he missed or his arms broke on impact

A possible level up or a seperate line entirely would be a halb,

Still want Rus to get Battery Towers as part of lategame Gulay-gorod.

This is an Halberdier, not a Pikeman.

This is a Pikeman. 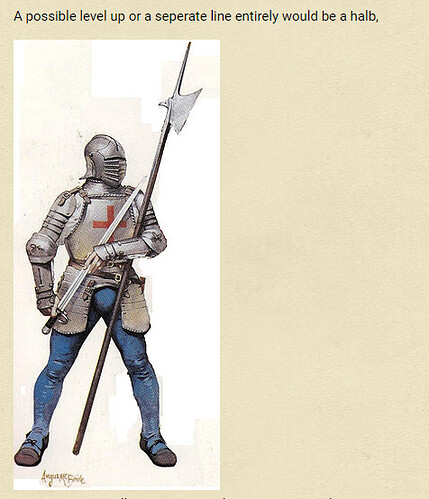 lol this is what i said

And halberdier is a knight, in historical sense (game sense they need horsies for some reason haha)

They are not, though. The obnly actual new units, were the Elephant, Iron Flail and Meteor Hammer units, everything else was a version of already existing units in the game.

Yumis and Naginatas are just Longbows and lancers, Sepoys and Ashigarus are just Muysketeers, Gurkhas and Arquebusiers are just Skirmishers…

Well of course every civilization will have a version of the swordsman and the archer and the knight and it is also historically true. Unless they use the same name or jersey I don’t think it will break the uniqueness of civs.

That is fake uniqueness. The point of an Unique unit, is that it it is either orders of magnitude better than a normal unit of the same role, is more specialized, or has a special attribute not usually available to it’s class.

This is why, in AoE2, the Huskarl and the Longbowman are considered to be good UUs, while the Teutonic Knight and Samurai are not; for example.

Every human being is unique and yet have the same physical attributes. Similarly the walls, the houses, the barracks they all were present with different names in every civilizations but still their purpose was almost the same. So it is not the fake uniqueness, it is the shared history.
I think you took my “Unique” word a little too straightforward…

By that I totally agree with you that it is not possible to make all civilizations 100% unique because they all represent the Earth after all.

Every human being is unique

Nope. Most people are easily replaceable, some replacements are even flat out universal upgrades.
No one is special, a Spearman is just a Spearman.

Just unique architecture and units does not make civs too asymmetrical, it’s about how you play with them. It’s civilisation bonus it tech tree matters. For eg. In age3 Duch settlers costs gold and Indian Villagers costs wood makes them different from other civs. It also have home city cards which allows players to have totally different game using same civs. I think age4 should have something like it(but not exactly the home city cards.), Not like the age 2.

I don’t know… The asymmetry seems hidden for now. I need to see more.

Agree about asymmetry whole heartedly. It’s one of my favorite aspects of any strategy game which is why I loved Age of Mythology (you should give it a go if you haven’t) and other games like Total War: Warhammer.

I personally think they could have gone even further with the asymmetry of the game, but I know the more hardcore Age of Empires fanbase would be against it so hopefully when they do Age of Mythology 2 I’ll get my way and get crazy asymmetry

mongols. can move their entire base but build no walls
Abassids house of wisdom. they have to choose a special research route each time the progress in age.
Delhi sultanate. research is free but takes a lot of time, which you can shorten by producing specific units
English: Most based on age 2, yet they have defensive bonuses and villagers with bows.
China: have dynasties so they have to choose a general playstyle. (unlike abbassids who will at the end get all techs)
French: Not sure there, might not remember. But they do get very early knights. However no groundbreaking stuff here, probably similar to english, much aoe2 like

We only know nothing about Rus and HRE. But its safe to assume Rus will have another new specific quirk.
HRE would have potential regarding very diverse UUs, but I doubt that will happen (would be asymmetric though) - I assume they will, as the other 2 western european civs, play more in line with age 2.

So to conclude- most of the civs take one core aspect of the game and change it up immensely. Of course the base game still revolves about rock paper scissors units and building up bases. Thats the main gameplay. But it is quite asymmetric between factions.

hm, I do not know if you have ever played AoM or AoEIII before, but my guess would be that you haven’t.