The end is near!? 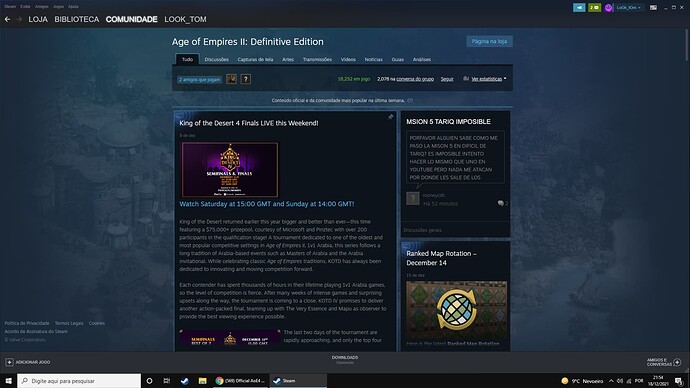 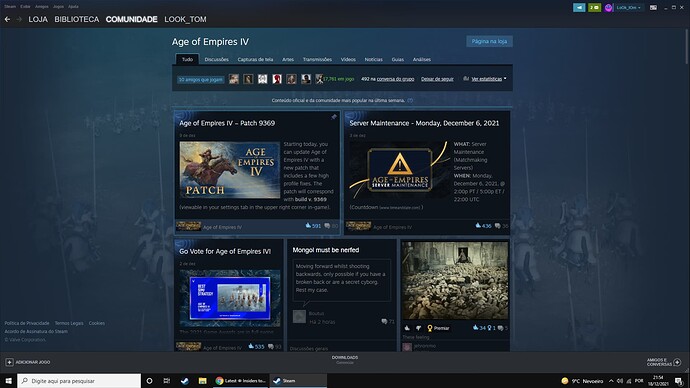 I don’t undertsand, is the end of what?

is the end of age of empires IV

@iAmLoOkTom Could you maybe explain to those of us who aren’t gleaning the same information from those screenshots as you?

OP wants to show AoE2 has more players already. While this doesn’t mean it’s the end for AoE4, it is indeed a pretty big reason to worry since it speaks volumes, especially showing which title is retaking the reins for the flagship of the franchise yet again.

I’ve been watching this as well for the last few days, hoping it wouldn’t be the case. While the numbers currently outdo eachother at times, unfortunately the clear trend is in favour of AoE2 widening the gap for good.

I guess the hope now is that players will return to AoE4 once it gets properly updated with desired features and fixes (if it ever does), but it might be too late.

Who would like to play a game with so many bugs/exploits and missing features and on top of that game where is no punishment for crashers/dropers? - Check my latest post

We keep adding toxic content to the forum. this does not benefit anyone. you should not compare the players. I trust the game and I will continue to support

it just shows how incompetent they are… not about toxic.
nowadays they sell first and then make the game, but for a franchise like this it shouldn’t happen.

There are huuuuge disscusions about how minimap should be changed or reworked.

20yo games solved this problem by scroll-in-out feature on minimap and everyhing is fine because of that.

Z- games which are not on STRATEGY-basis have voice communication implemented - RTS of 2021 doesnt but yeaaah we have epic system which hides normal msg in chat. - wow.

AoE IV is like 20 years behind actual progress and where it should be. If we consider with which devices devs. had to work in early 2000s and what they can use now its just SHAME SHAME and SHAME into their account.

So we should praise them for a bad work done in a simple tasks?

If I would treat my patiens as they do I would have nothing to eat within 2 weeks - (dentist btw.)

Another example: Why such a big studio doesnt have weekly-question-answer video blogs on YT where they could answer most asked questions? - specially during first months after release and mostly related to bugs/exploits etc. etc. They made one stream so far where they answered only like 10%

they give us a simple and functional game, and people applaud, it’s 2021, not having a mod option for example

As much as it may sound like toxicity, unfortunately the “incompetent” word is a valid criticism in my opinion. It means a person who does not have the right skills and understandings for the job at hand, and this became quite clear for me that this is exactly the case, without exaggerating, after that update which announced this:

We all know this feature ^ didn’t actually work and it’s still a missing feature, game functioning exactly the same as before the update in this regard: you can actually only spectate your team after you’ve been eliminated, which doesn’t even always work, and which was already the case before the update already.

I don’t applaud everything. I want them to fix and change things. But what is missing is the way of expressing it. There are many ways to show discontent, and most go the wrong way. I don’t think a message from “THE END!” with some screenshots it is something healthy.

Everyone typing in this forum wants the game to be good and cares about the state of it.
But you guys doing the opposite everyone here is spreading toxic stuff about the game and even people who might enjoy it are getting turned off by the negative comments everywhere, if you make people leave the devs will eventually care even less and support it less since the profit is very little with small player base…

Im not talking here if the devs did a good job or a bad one, my point is if you care about the game stop spreading toxic comments everywhere.

I don’t think a message from “THE END!” with some screenshots it is something healthy.

It’s not a great way to express it, but people are fed up with being told they’re wrong, and the devs are experts who know best, whenever they suggest ways to improve the game. Player counts are an objective measure of whether the devs are getting it right or not. How long can they carry on with their “we’re right, you’re wrong” attitude when the player count is now only similar to AoE 2 DE’s?

AoE4 has a fraction of the content of AoE2DE.
AoE2DE has 5 times the civilisations, campaigns, random maps, game modes.
AoE2DE has custom maps, a scenario editor and mod support. AoE4 has none of those yet.

If you compare the AoE4 player number graph with the AoE2DE player number graph you can see that they peak at different times of the day, AoE2DE peaks about 5 hours later. That likely means AoE2DE is more popular in other parts of the world then AoE4 is.

As a comparison AoE3DE which is kinda in the middle with amount of content but way stronger in diversity of content then both of them with a new DLC released recently only has a 4k 24h peak.
AoE3DE has a massive peak on release, even overtaking AoE2DE but then it went down very fast again.

Counter Strike: Global Offensive took a full year after release for overtake CSS and CS1.6. Not it’s the most popular game on Steam.
AoE4 seems similar to me. There are a lot of small problems with the release version but nearly all of them will be gone in a year.

I’m, not here to defend any of the decisions the developers made. I disagree with a lot of them myself.

AoE4 is even more successful then AoE2DE despite major features like a scenario editor are missing and despite if having less civilisations then AoE2 on release in 1999. (Or the same number as AoE3 in 2005 with a similar amount of diversity between them)

Yes they could have delayed the release by a year and give us lots more betas but then we couldn’t play the game now. Now we can already play the game and can already have fun with it, even though there are many things missing.

I think alot of players have lost hope in aoe 4 be it due to slow patches, game breaking bugs or out of tune nerfs, but it is a new game they still have time to fix their image although time really is running out for them as even some of the commited fans have lost their patience

I agree that the game is going to get better over time. You are very pessimistic. It is true that Relic could improve their communication but they are working on this, there is no doubt.

AoE4 is great.
It’s not perfect, but they got the core parts right and the details will be polished in some time.
Don’t over dramatize.