The Khaganate Palace problem after Update

Here is a discussion about the Mongol, Age IV landmark, the Khaganate Palace. 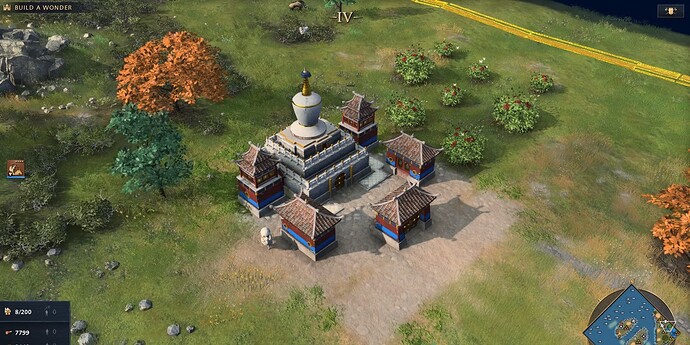 After having whipped my friend into doing so maths.

And taken into consideration the importance of stone in this new season patch,

Khaganate Palace becomes even less of a incentive to get.

Reason for this is down to simple math:

You gain much more from the White Stupa, minute for minute compared to the Khaganate palace.

Now, Horse for Horse, you get more value from the Khaganate palace.

But the interesting thing comes into play when you add the fact that with the white Stupa, you can get units other than horses for the stone value it brings it.

Here is a list of units per minute you get with the white stupa:

The White stupa gives you 240 Stone per minute.
Additional you get a much larger boosted influence area. to set up your production.
Quite often is the White stupa combined with Pastures to double the rate of sheep. Thus requiring less Pastures to boost your food economy, thus saving you wood for other things.
This stone resource can be used so many more things than just Cavalry units.
One could easily obtain the extra mongol Improved upgrades, thus increasing the value of your units higher in a much earlier stage of the game.
One could also use that stone resource to boost your economy or production rate at critical moments of the game.

Now with the new patch and stone being a much more important and resource that is finite.
It becomes increasingly more valuable to get the White Stupa as one gets limited to amount of Ovoos one can make.

So the Bonuses the white stupa gives you is this:

Compared to the Khaganate Palace that gives you this:

Now how to address the Khaganate palace?

Well the English has Wynguard palace. That now has added flexibility to produce a band of units of your choice, with a 2 minute production time, for a symbolic value of 200 gold, 100 wood and food.

The Khaganate palace should be either made more similar to this in the form of a Symbolic amount of resources. You get to choose to make 12 Horsemen or 8 Mangudai, 6 Lancers, with a Production time of 1 minute.
This way, it becomes a production building that does not come in conflict with your population cap.

And you are able to produces units needed when needed.

Alternativly, One could give it a influence aura, that gives you x3 or x4 Units instead of x2 units when using stone to double produce.
This allows you to get much more value from the double production, and would give increased value to say: Double-Villager production when you hit Imperial. thus functioning similar role as the Swabia, if one plans to catch up with econ or make a quick comeback in teamgames.
And thus giving you more value from the stone, and could synergize well with other landmarks, such as the silver tree.

Regardless what the fix is, the Issue is that Khaganate palace is simply just not worth obtaining.

The only place I see it beeing worth is on Water maps, where the space is tight and you have to hard-focus on navy, and stone not really playing a big role in an aggressive playstyle, besides the Watermap existence now becoming a myth in the Quickmatch maker.

So what to you think would be able to fix the Khaganate Palace?