This is a follow up to this previous post, because I feel now the problem is more messed up:

Musketeer-type units should be handled with care III - Discussion

In order to better represent the gunpowder age and line infantry tactics, the musketeer-type unit has an unprecedented design in this series: It’s a front-line unit with high hp. It has a decent melee damage. It is also a ranged unit so you can effective hit-run with it. Don’t get me wrong. I actually think that’s a great design. The problem is, if you give them too much bonus, they easily become OP. Every civ with even the average musketeer could spam them in the early game, and every civ wi…

First of all, I think musketeers should be treated as a melee infantry of the game. Yes there are true melee infantry, but most of them perform poorly in a world with so many ranged units (that’s why they need to be given a siege bonus to be useful).
Musketeers are tanky, have a high base damage, and do very well against most “true” melee units (because multiple rows of units can keep dealing damage, while the back rows of melee units are idle). By all means they are the early-modern gunpowder “melee infantry”, kind of a hybrid of AOE2 swordsmen and spearmen with range.
In that sense, giving them longer range is dangerous. Longer range means always getting the first shot, better hit-and-run, and more ranks dealing damage with the same width. That’s a huge advantage on top of the high hp and high universal base damage.

It’s okay if one or two unique units have longer range as a unique bonus, though (like AOE2 inca), but image half of the AOE2 civs have a 2 range spearman or swordsman.

Now there are 8 civs with musketeers with the regular 12 range (5 regular musketeer, janissary, sepoy, ashigaru). Portuguese musketeer can get 13 range with logisticians but that upgrade is not used very often.
and 6 has one with longer (>=14) range (tomahawk, carolean, bolas, regular, gascenya, maigadi), basically every new civ added in DE has one. IMO that proportion is too high to consider it as an “unique trait” anymore.

I don’t know why all the rest need 14 range. Gascenya and regular are not overall “weaker” musketeers like the tomahawk. Maigadi does not have melee bonus either but the base melee damage is high enough (and 1 pop? Really?). Yes they cost more, but the higher cost should pay for higher damage or hp, not longer range.

I wonder what is the consideration behind every new musketeer having 14 range. I think either it should remain a unique trait for one or two units, or those with 14 range should get lower damage, or other musketeers can have a way to gain 13 or 14 range later as well.

Yeah but I’d rather they tweak damage, hp, resistance or even speed, not range (though I think 4.5 speed ashigaru is too much, should be something like 4.25, but that is still better than longer range). Because I consider musketeers as a “melee” unit, it’s not a good idea to tweak the range too often.

You have a good point, but I think/hope they nerf them somehow. And I hope it would be sooner than it was with Sweden

Caroleans are quite a unique unit and they need a card to get the extra range, don’t think you can class a bolas warrior the same though it has range resist, is very expensive and is basically the dragoon of the incas(a very bad 1 too, until late game).
The regular costs a lot more for only +2 range, and the USA lack a good dragoon, their carbine cavalry is trash tier, so if anything they desperately need a good musketeer.
Tomahawks are bad in general.
The Magaidi is a 200 res merc so it should be strong, typical musks cost 100 res.
Again with gascenya, you need to take into account that they cost wood so are slightly more expensive and they lack any form of skim until age 3, there’s no crossbow/archer etc all they have is that musk and a kind of coyote runner until age 3, any kind of archer/pike combo does really well against them prior to age 3

Edit: Also most of the more expensive/unique musks with less range have other benefits, like janissarys have more hp/ ashigaru are very fast, sepoy are incredibly strong etc.

Like I said, you can pay for more damage, hit points, or speed, but range for musketeers, which is almost a melee unit, is a dangerous stat to tweak.
And you don’t have to give every new expensive musketeer +2 range as a bonus. You can have 1 or 2 units with that bonus, but not every single new unit. There’s a lot more bonuses you can play with.

I agree. And what is worse, those new musk type units walk faster than 4.0.
In AoE3, the standard speed of ranged infantry had always been 4. And only a handful of ranged units were allowed to walk faster than 4; strelets and kassadors in exchange of their lower hitpoints. I think they are designed to motivate player to micro them hard since they are vulnerable.

Existance of Ashigaru, caroleans and African musks, who walk faster than 4, took away the advantage strelets and kassadors had, making them just a weak useless skirms.

cassadors have massive dmg and range resist, they are good units no matter what.

I sometimes hear players from AoE3 TAD say cassadors deal higher dmg (and lower rate of fire). I don’t remember how they were tbh, but at least currently, cassardors doesn’t have good dmg. With veteran upgrade, both kassador and skirm have 18dmg, and with guard upgrade kassadors have slightly better dmg only by 1. Their range resist is good but they also sacrifices thier hp for that. The rate of fire is same as regular skirms.

So dmg and range resist alone won’t make them good in my opinion. I still think that walking speed was an important advantage they had, and I am against taking it away by giving fast-moving musks to many civs.

(Whether cassadors are good or not is a bit off topic, so I leave some data below and let other ppl decide. I am not going to talk about this in this thread again) 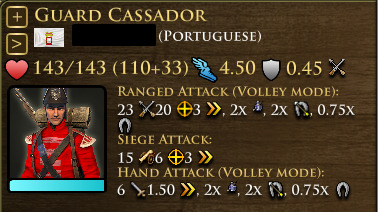 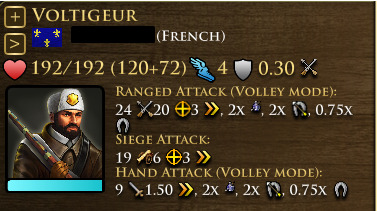 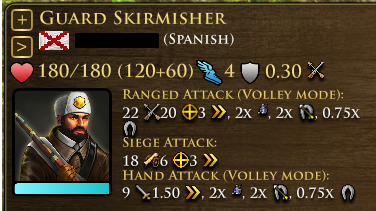 cassadors have 30% dmg boost from cards, it is a very disingenuous comparison not counting that in.

sure 3 dmg often will not mean a lot but still they are superior in ranged fights.

The major difference is that voltigeur get 300 hp or so with all cards, while cassadores are very vulnerable to artillery shot. Plus, the speed boost does not matter that much post imp. Pretty sure FU cassadores lose against FU voltigeur.

This was changed long ago (even before the release of TAD, if my memory is good, shortly after the release of twc, I remember reading the patch notes as a portuguese main). They used to do massive damage, with a ROF of 4.5. Very usefull for raiding/microing, but it also lead to a lot of damage being wasted in overkill.
Now they are just fast skirmisher with low hp that mainly cost food instead of gold.

anyhow, imperial cassadors should have 242 hp vs 294 hp on votiguer.

so pure gunfight cassador come out on top.

as for artillery then frankly neither unit has enough HP to matter, maybe you are lucky and some skirms will survive the splash dmg more often than cassadors but probably wont happen too often.

vs cavalry it is best case scenario 1 extra hit that the skirm can tank, in fact vs a normal imperial hussar (60 dmg) they both take 5 hits to kill.

also worth pointing out that cassadors are significantly cheaper.

anyhow, imperial cassadors should have 242 hp vs 294 hp on votiguer.

After making the calcul myself, I agree that cassadores win against voltigeur (by FU, I meant fully upgraded, with advanced arsenenal and all cards). My bad.

Voltigeur needs 13 hits to kill a cassadores (as they do 19.8 damage after factoring the range resistance), cassadores only 12.

Honestly for artillery, voltigeur have nearly the hp of a FU generic musketeer (315 hp). They can take it more than cassadores.

For imperial hussards, you missed one upgrade for voltigeur hp, meaning that they now take 6 hits to kill.

Personnaly, I’l take the voltigeur any time over the cassadores post imp. Obviously in forteress age, cassadores are a more intresting unit.

your calculations are off, you need to follow my example Hp/(1-armor).

EDIT : Indeed, it should be calculated that way. However, I did not use these values in my calcul, so everything stay the same.

Let’s stick to the topic…
I mentioned kasaddors in order to say that recent musks are so good that they are taking away other civs’ advantages. I didn’t mean to say kassadors themselves are bad. I wanted to say that they have become relatively weaker because of other fast-moving musks. Musks is what we should discuss here.

I do think fast-moving musketeer (more than 4.25 for non-mercenary musketeer) are bad for 4.0 speed skirmisher. However, even with 4.5 ashigaru, cassadores are still good because they can’t be catched by them. Even without micro (hit and run), skirmisher is a hard counter to musketeer (even more with the counter infantery rifle upgrade).

Personnaly, I have developed extremist idea about how the game should have been balanced/designed. I personnaly find the skirmisher/dragoon too op for the musketeer line to shine. The fact that dragoon outrange musketeer (with caracoles) make no sense for me, and I don’t mind long range musketeer.
I believe that Sweden military design is the way the game should have been done.
1/- Musketeer with a charge mechanism similar to carolean, to catch skirmisher that are too close.
2/- Melee cavalery (hussards etc) with short range attack, to kill pikeman.
3/- Impactfull formation with special boni (e.g. line formation, column formation, square formation etc.)

Exactly! We don’t need any more skirmish goon, musketeers need to be solid baseline units, and unfortunately, the meta evolved in a way that makes them obsolete. I hope the devs will revisit other civs muskets and buff them to 14 range, so they can soft counter goons.

“Traditionally” in games like AOE, high speed ranged units like dragoons are supposed to have shorter range than ranged infantry.
But as musketeer is already such a strange unit (basically a swordsman with 12 range + spearman), that would be quite difficult to balance.

On the other hand, typically in RTS, “slow, all-purpose unit” is usually outperformed by those with higher speed or longer range. Idk how the AOE3 musketeer fits in that scenario, but I fear skirm-goon would always be preferred.