The New Oromos are Awesome

Having actually functioning heavy cavalry for Ethiopia is game changing. The melee role with higher attack and cheaper cost fits Ethiopia’s needs much better. I especially like the new flaming voodoo doll skin for them. 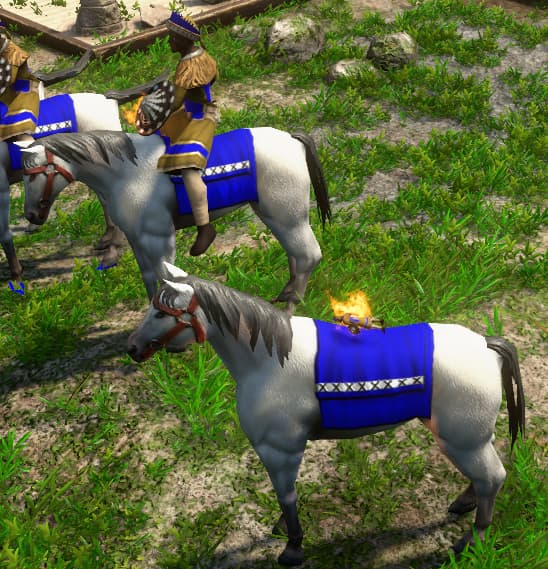 Not tried them yet, stopped using ethiopia as much since all the nerfs though I still enjoy them. I’m guessing they are like cuirassiers without the aoe.

They’re more like a scaled up version of the Deli. They have 1 RoF and 30 attack so overall their melee attack is slightly higher. The ranged attack is now charged so it’s more of a little added bonus instead of a massive annoyance to need to switch them out of it to do their job.

They’re also way cheaper at 120f / 120c, and not really any weaker other than having their health lowered by 30. They are a 3 population unit, but the new stats might even be a little overpowered.

Thanks for the info, will try them out. They really needed a useable heavy cav unit, nice to see the price lowered as well.

They are great before they just required a lot of micro to capitalist of their strengths.

These ones are user friendly.

They absolutely were not. No amount of micro would ever make their old ranged attack advantageous versus anything other than melee only units. And in all of those situations, Javelin Riders would do the job better.

Stop your vendetta against them they had their purpose, you can only have a small amount of simultanious hand attacks you can have many many ranged attacks and damage for oromo were way higher than a jav riders and they didn’t take 1.5 damage from skirmishers.

Sometimes you just can’t reach skirmishers with hand attacks and sometimes you can’t get a good surround since they’re retreating between two obstacles it happens all the time.

But if you got them close enough they popped them with rapid fire ranged attacks even with range resist since their damage was so high.

But now they’re a lot more intuitive and easy to use unit…fair enough, But I don’t like the Hakapelit change, sweden already had goons they are called caroleans.

Snaring in melee was better in every case other than when there’s a wall inbetween.

You had crossbows to combat rifle riders, in fact that’s the only reason I got crossbows as swedes was to deal with counter-cavalry.

Caroleans were Dragoons, they’re pretty bad at being musketeers due to their low damage and vulnerability to cavalry in melee.
And skirmishing duties were for Hakkapelits they could seriously harm musketeers when in stagger mode and switch to melee mode to quickly mop of the skirmishers but you had to run away from pikemen.

The whole not having skirms and goons was sweden’s whole thing, making hakkapelits a dragoon-like unit is just ruining it,

I have no idea how you can defend the old oromo it was trash, cuirassier price and macemen level effectiveness. At least now it’s a solid heavy cavalry unit that is worth making and shipping like a cuirassier.

Hakkapelits are way better now, they didn’t even change them much statistically, just a bit more speed and +4 range so you can use them in the exact same way you did before. It’s the multipliers that they changed so they counter heavy cavalry and artillery. It’s a slightly more expensive dragoon with less range but a good hand attack and a bit more HP.

You had crossbows to combat rifle riders

At the start of DE they didn’t have crossbowmen so it’s not like the design of Sweden with massive holes in their unit roster has a strong history.

It seems like the change to Oromos and Hakkapelits was more because the devs realized that design of ranged heavy cavalry doesn’t at all fit their role. Hakkapelits were at least always niche useful, but they did kinda overlap with Hussars. Even then, with the new tags their stats and function has been largely preserved.

tbh after using them, I feel like the new ones have a higher floor but a lower power ceiling.

Before once you get to like 40 - which granted requires going for a specific build that ignores nearly all conventional game sense since you stop at like 40 vils - with range carocole, armour and the self healing card they become like an a nearly unkillable death mass where everything dies approaching it or as you are charging in

Now since after that one shot they tend to just charge in and die, while before you can fire and retreat

Not sure I like Oromo now, they’re functionally much closer to Shotels which seems quite redundant. They’re only 0.5 speed faster than Shotels but Shotels are available in age 2, have a strong synergy with Gascenya (huss/musk) because they share vet/guard upgrades with them, and they have Shock Infantry tags which make them take between 30-50% less damage from most anti-cavalry sources. If they make Oromo much faster (maybe 7 speed) and Shotels a little slower but maybe tankier then I could see the cause for distinction.

At the start of DE they didn’t have crossbowmen so it’s not like the design of Sweden with massive holes in their unit roster has a strong history.

Hakkapelits were at least always niche useful, but they did kinda overlap with Hussars

Like lancer and hussar, similar but they still had their distinct roles.

They introduced Crossbowmen long before they changed those multipliers.

They are still quite different to Shotels. Shotels are more like a lancer which makes them a lot more specialized and much worse at raiding and taking out artillery. Shock infantry taking less anti-cavalry damage comes at the cost of being less resilient to everything else. So those things together make Shotels exceptionally bad at taking out artillery. The new Oromos are tanky and have high damage output against everything, so they’re great for raiding and charging artillery.

The new Oromos are tanky and have high damage output against everything, so they’re great for raiding and charging artillery.

The new Oromos actually have significantly less hp than an equivalent cost amount of Shotels (and Shotels are much more pop-efficient to boot!). When carded Oromos do have 30% rr compared to the Shotels’ 10%, and you’re right that the Oromo’s speed and higher attack makes them better for alpha strikes, but not by as much as would be expected.

Shock infantry taking less anti-cavalry damage comes at the cost of being less resilient to everything else.

This isn’t inherently true of the class. Take a look at the new Pirate and Wokou Pirate outlaws, they’re tankier than just about any heavy cav-type unit out there due to their tags and resistances.

What matters most when charging cannons is the damage output and speed. For comparison, I’d say 1 Oromo is equal to about 2.5 Shotels. That gives 425 total health and 27 attack/second for Shotels, and 350 health and 30 attack/second for Oromos. Even though the Shotels have more total health and comparable attack, the Oromo is still the better option because as the Shotels lose health, some of them will die, and their attack output will then drop significantly. Since Oromos move faster and attack with their full strength longer, they’re going to do much better against things like artillery, villagers, and cavalry. Shotels who have a bonus against infantry and less overkill will outperform against infantry.