The Norwegian translation is unnecessary, badly done and makes the game near unplayable

Downloaded the game on Gamepass the other day and when I booted it up I was greeted by a badly phrased, seemingly machine translated UI. Tried searching trough the options for a way to turn it off, but was unable to find a way to do so.
If Microsoft wants to waste their money on translations no one asked for, that’s fine, but please let me play the game in English. 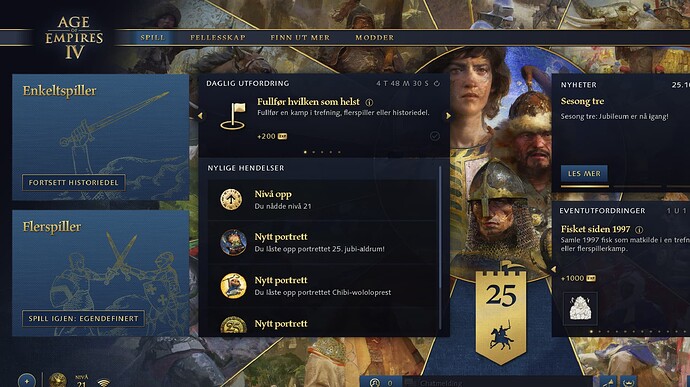 I couldn’t agree more.
I’m glad I got the steam version and kept mine in English.

But to be honest. Most Norwegian-translated anything, be it games, manuals or whatnot, is usually a quite horrible and illogical choice of words.
I hate that my Youtube feed on my phone sometimes has videos with translated Norwegian titles that completely bamboozle me causing me to think youtube automatically changed the language settings or something.

Not to mention there’s the issue with Dialect. As it does not cater to Nynorsk afaik.

Also for those outside the language sphere:

For example they use they translate the word Skirmish to Training.

While Training is one of many correct words, it doesn’t really apply nor translate well, as it quite literally means in the essence: Hitting a Target in the context of Accuracy, or the English word for Encounter, as in meeting something.

A better term would be: Kamp, S1 L2 A3 G4 (ignore the numbers, cancer censorship) or Strid.

but in reality, Norwegian dosn’t really have a direct translation of the meaning Skirmish. As a Skirmish means a Battle of a smaller scale.

Actually now that I’ve battle the forum censorship, I am kinda shocked that not 90% of the words in the screenshot havent been censored.