The Pavisier in melee mode

When changing stance in melee mode, the Pavisier takes cover behind his shield and holds a lance. Now, I was thinking that there should be a corresponding change in the multiplayer against heavy cavalry. They have a low melee base attack (7), hence they should stay balanced with a slight multiplayer.
What do you think? 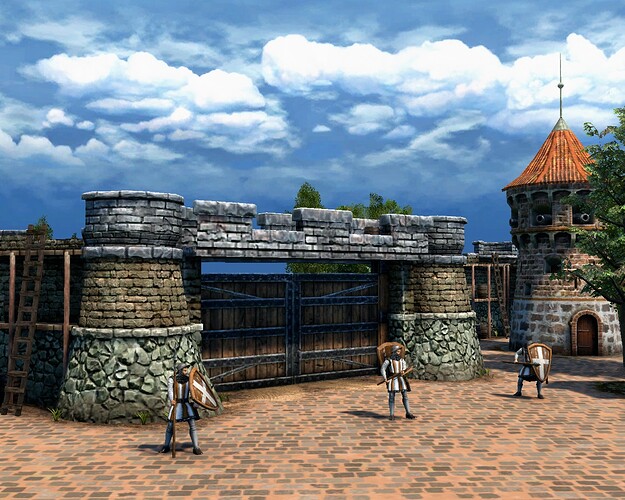 Personally I don’t think it is a good idea (although it makes sense from a visual perspective). The unit is intended to be countered by heavy cavalry in age 2 so it may be weird if it gets to a point where it can perform well against it’s intended counter. I think it may be good instead to make changing stances more instantaneous. I seem to recall the animation to change stance is very long and it makes the unit stay still which almost defeats the purpose of switching to melee resist when fleeing melee cav. If you do they just get snared quickly.

Here is the problem: imagine entering a melee stance, equipping yourself with a shield and a lance, just to flee from your opponent. It doesn’t make sense.
I conceive the pavisier as a versatile unit, which still would be countered by heavy cavalry, but not as hard as it happens with other light infantry units.

I don’t think it would perform excessively well, I’ll give you some numbers.
Considering a 1.5 multiplayer (up from 0.75), the pavisier in Age II in melee mode would hit for 10 and 11 damage (7+3.5) against a Hussar, which is quite low considering that the musketeer’s melee base attack is 13 and has a 3x multiplayer against heavy cavalry, being their counter.

but that’s one thing vs normal hussars, and something entirely different vs weak cav like coyote runners or kanya. Skirms should always have a penalty vs heavy cav, since melee counters are inherently weaker to ranged units than ranged counters are. The only unit good vs cav and heavy infantry is the jaguar prowl knight, which is heavy infantry because heavy infantry means infantry which is good vs cavalry

A skirm having strong melee resistance potentially is already a strong selling point against fast melee infantry like rajputs, which although fairly weak, are actually pretty similar to coyote runners when they make contact with the average crossbow/archaic skirm. If anything the pavisier should just get a larger anti-heavy inf bonus in melee

Really?
I’m curious if anyone would actually make Pavisiers melee mode when facing infantry, especially the heavy one?

heavy infantry means infantry which is good vs cavalry

We are talking about an atypical light infantry unit, which holds a shield and a lance (typical heavy infantry elements).

(Lancers also hold a lance and counter infantry, so that’s both irrelevant)

They aren’t infantry units, I was making that assumption because infantry units holding a lance/spear/pike are good against heavy cavalry (Spearman, Pikeman, halberdier, etc.)

but that’s one thing vs normal hussars, and something entirely different vs weak cav like coyote runners

There is a separate multiplayer for them (shock infantry) and usually is lower than the one for the heavy cavalry (1x should be fine).

If a unit is going to be good against both cavalry and heavy infantry, that’s fine, but it has to be heavy infantry (and thus countered by skirms)

We agree here. Also, they could work like the new mounted infantry native warrior, changing their type whenever you change stance.

no amd I’ve stated this a thousand times. grens are useless because they are heavy infantry and bad vs cav. heavy infantry counters cavalry. the aesthetic of a unit like armour is IRRELEVANT IN A GAME COUNTER SYSTEM
this is why grens are bad against everything and tagged incorrectly. notice how all the new civ grens are counters to cavalry and actually functional as a unit???

Skirms need to be bad vs cav. bad. not decent. not ok. BAD. an age 2 unit cannot be good against other skirms, cavalry and heavy infantry that is just plain ridiculous. They would have no true counters, especially with that melee resistance.
Cav >>>> skirms. no question, no debate.

It’s debatable, like everything. Pavisier is an UU and currently isn’t standing by his uniqueness.

It could have been an early archaic light infantry that counters light infantry (like schiavione) but it’s just more or less a crossbow that changes a little bit their stances and can’t be upgraded unlike all other archaic infantry with the right politician.

What it’s correct is that the use of spear is against the visual design of AoE III, where all the infantry with spear counters cavalry.