First Cater to AOE RTS community then think about bringing in other people. If your Product aligns more with the mental model of the core audience there will be less disconnect in End user experience.
The core audience will then bring other people similar to them. You cannot please everyone, first, any designer should understand that. (Designer in video talks about designing for a larger wider audience, great to add to portfolio and resume, but kills the product for core user base)

Increasing the size of weapons does not result in unit visibility, what you do is make the Silhouettes distinct (weapons are part of the silhouette). This is a core principle of any RTS game, just check out your own AOE 2 DE and how each cavalry unity has a very different silhouette Human eye always go for the overall form, colour, then for textures and other minor details (weapons should not be treated and individual entity, but should be considered as part of the unit).

The long bowmen look great but looks like they shoot toilet paper rolls, Swords and shields are looking bigger than the units itself. This tells the user, that they are infantry, but does not help in making distinction between an Indian or English or what Infantry. The units are bigger than trees, more like in a 4X game like CIV VI.

Look at the Delhi Sultanate Trailer, Indian troops looks same as English, but one has to then pick and look at their helmets to tell who is what faction. In DE, the Indian units have different silhouette than the English. The problem in AOE 4, your silhouettes lack horizontal elements to make up a distinct form. The champion has a different Sword Stance in AOE 2 from a Man at Arms and that form changes the vertical and horizontal aspects to form a distinct outline. Their Hand stance, foot stance and movement animation communicates very strongly.

Same Mistake Relic studio did for DOW 3, instead of catering to Warhammer and RTS community you went for Esports gameplay and other communities who doesn’t play RTS games but, thought by showing a cool Titan (Robot in your game), people will come play it. RTS community is different from Esports.

People already have Esports game and Mech games so why will they leave that and suddenly play this?

SC was made as a RTS game first, Esports originated from it organically, you cannot enforce it then you will end up in a game for nobody.

UX is not about UI, UI is a very small part. Play experience, visibility, colour, geometry, performance, tech, server performance everything contributes to UX.HCI is just a small branch in that.

Hope you guys can improve the game and deliver the best RTS in the market, keep up the good work and keep growing.

Totally agree with this post 100%, by using cartoon graphics and simplistic game play mechanics with no risk at all, they are going for the bigger audience, yes those who play fornite and mobas, those already have their game, you are not attracting RTS players with these color graphics, almost no texture on units, poor unit animations, no cavalry impact after charge, buildings smaller than units etc… I have playe a lot of RTS from age 2 to coh2, I mean there are a lot of greats RTS out there why should I bother with this ? What does this game have that will make me stop sc2, coh, dow etc? This is the exact same error you made with dow3… The same

You should see what people Say on different communities: most of them hate the art style and the lack od details on units. STEAM and reddit Is on fire with this and many commenfs on the main gaming sites. This game Will probably break the community and this Is the worst choice.

Well, I’m just guessing here, but the answer might be coming from Microsoft, who wants more games sold, more people buying and playing the game… resuming: marketing doesn’t think like a player, it thinks like a businessman. So, Relic would have to comply.

They speak about the “community”, about “the heart of the game”, etc., but that’s not entirely felt. There are very cold decisions taken around these games.

I really wonder what will happen if AOE 4 turns not to be the smash hit they wish it to be…!?

And we’ll have the same stupid discussion about which is better, AOE 2 or 3, dividing the community. Many of us said way back then that Age 3 wasn’t that good, that many ideas were nonsensical, and I do remember quite well how the devs defended the game, saying it wasn’t true, that the game was cool, that people were not seeing the big picture, that they would end up loving it as much as Age 2. But hey, look at us now… Microsoft had to give in to the facts: the community had spoken, it knew better, they would retry another shot… But you know what, they keep being Microsof after all, putting their eyes on the wallet first and the on the real purpose of the game second. Bad choice…again.

About units, I have the same experience because I can say what the unit is, but cannot say how the Mongols are really different than the Chinese. For example, the Mongol heavy cavalry miraculously has European lance and the Chinese have Glaves. Other than that I cannot say how they are really different. Maybe the graphics aren’t improved or saturation is making the minor detail invisible.

Do you know why X-Com Enemy Within was so popular

Its UI/UX catered to a wider audience. It wasn’t beholdend to “how it used to be” and instead decided “hey you know we’ve actually LEARNED SOMETHING in the past 3 decades and maybe we shouldn’t be doing stuff that only barely worked when the first game came out, and that we actually only barely tolerated the rather janky UI/UX”

People seem to think that the devs should be making AOE 2: Ultra 4K HD or something with literally zero changes to UI/UX in any way shape or form.

Really this is just a form of elitism.

X-COM is not even a masterpiece compared to AOE. Elitism if the OP is providing a substantial feedback? I’ll never forget that DoW 3 fiasco, Relic is basically doing the same thing again here for AoE IV. Cater all and you get a fragmented playerbase.

X-Com is a tactics turn based game not a RTS game. RTS in today’s market is very niche and X-Com indeed kept many of the core gameplay mechanics.

RTS does not mean you can just build some building, Amass army and class each other. It has micro and macro level gameplay that happens real time. Quick decision making requires visibility and legibility and easy way to forage information presented.

Thus core community that has been playing this franchise comes first and foremost and their feedback is what matters the most and their needs and wants needs to be catered first.

The game currently presented looks like it is not catering to anyone, many AOE content creators did make videos on this, but because they cover AOE franchise on their channel.

If this is gonna be the definitive and AOE experience for the next gen, it needs to stand the test of time like AOE 2, currently it looks like it won’t even last 1 week before everyone moves back to AOE 2.

Original AOE1/AOE2/AOM player here, the UI is awesome. The minimalistic approach and its transparency allows for better visibility, furthermore the layout can be scaled if adding new features. Is there an idle villager button ?

AOE 3 is a cumulative masterpiece of Ensemble studios. I was 15 when AOE1 came out and this series has been the core of my gaming experience. It was truly innovative and I have spent thousands of hours of fun playing FFA since 2008. I think part of the low sales was simply like me, I had to buy a new computer to play it! and at the time I went to college and could not afford one because the graphics were quite revolutionary at the time.

It may be a bit more complex but once you learn and develop your own tactics with each civ, it is highly diverse and less predictable.

This is the time to take the best from both games and use it for AOE 4
unique units, and some that break the molds
mercenaries
native outpost
trade post
siege units with crew
XP as a resource
unit abilities
explorer hero
deck choices
better/ easier to understand countering system
etc…

Where is the innovation for AOE 4? it looks too much like AOE2.

X-COM is not even a masterpiece compared to AOE

Not sure if you’re confusing it with X-Com Apocalypse or something but if you’re going to argue that X-COM isn’t a masterpiece of a sequel, you’re on shaky ground

Cater all and you get a fragmented playerbase.

Look at those champions from Aoe2. You recognize them as champions because of their colors and armor, not because of the weapon (sword). Even zoomed in swords are just barely visible. 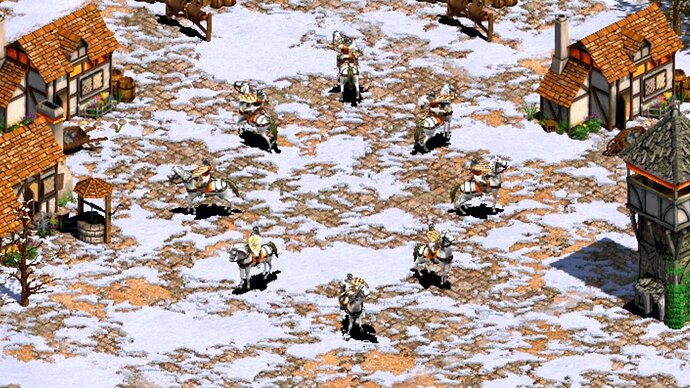 Visibility of weapons got better with Aoe2 DE, but also here you recognize them as champions because of the colors and armor (keep in mind this is highly zoomed in). 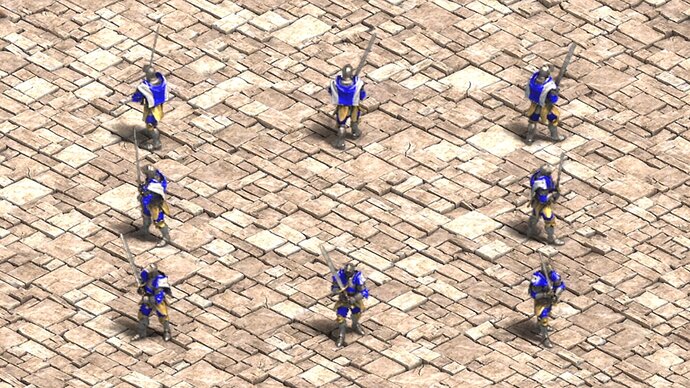 And a last example of Aoe 2 DE arrows.

Even zoomed in they look much smaller than in Aoe4 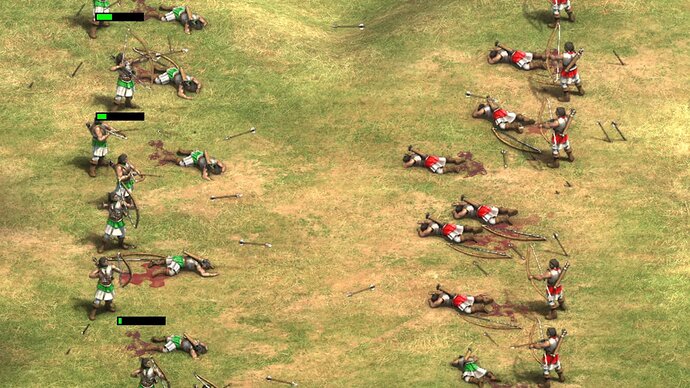 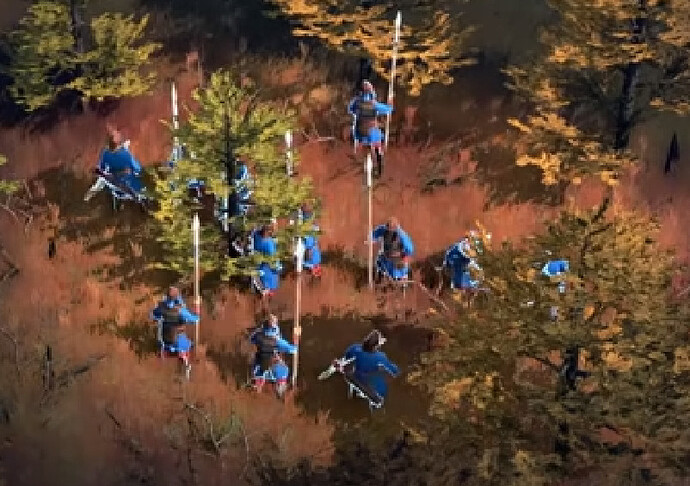 With ingame zoom they maybe look better, but yes. Units are not very detailed.
My last desperately hope is they showed us gameplay with low graphics or some kind of visibility mod. But probably not

I get your point to an extent but to be honest, you picture is so low quality that even the mona lisa would look blurry.

Viper said he’s happy with AoEIV being AoEII 2.0. Doesn’t sound too enticing to me. I wonder how many competitive players feel the same? There are many mechanics of AoEIII that I’d love to see in AoEIV but it seems like Relic are listening to the top Esports players instead.

The units models are terrible and hardly distinguishable.

Also the stance of the champion, Man at arms, Mangudai, Knight etc which adds to the silhouette.

Yes it is Elitism, because nobody played this game other that AOE RTS players, they are the user base and the persona the company should cater to, Then comes others. The community kept the game alive, by pumping money and remastering does not magically spawn users. AOE 3 DE died off within 2-3 days. AOE 2 still strong with 35K+ players on steam always.

The community was formed because, there are qualities for AOE 2 that catered to the particular userbase and the learning the devs got from AOE1 and how they wanted to play the game in AOE 2.

This game will be another DOW 3, just wait and see. Elitism is fine if it’s not toxic, and AOE RTS players deserve the best AOE RTS game.