AOE 4 is based on Craig Mullin’s artsyle, he is the king of digital art, his artworks are just out of this world and showcases exceptional skill in making digital painting. AOE 4 graphics is inspired by it and made in 3D.

Trailer based on this work 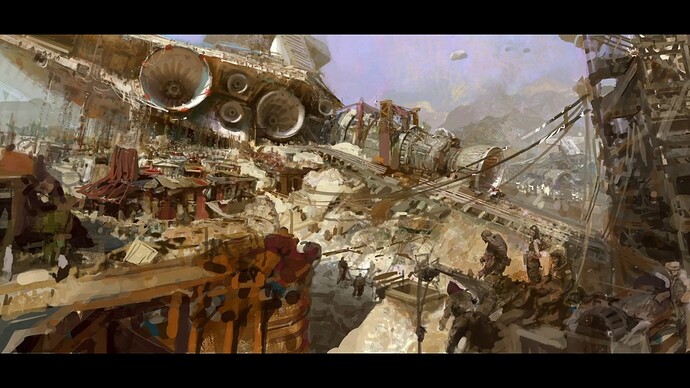 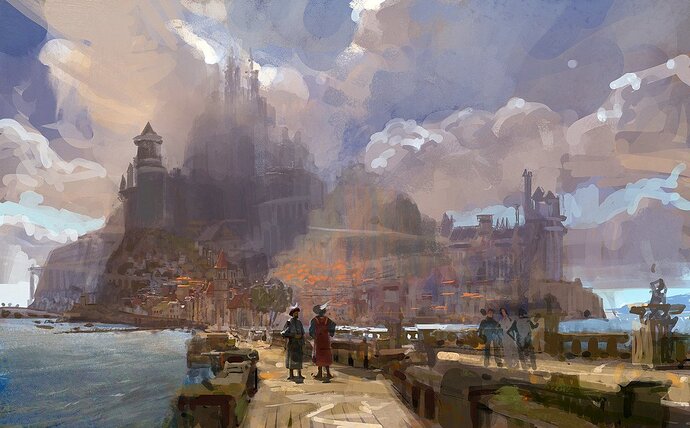 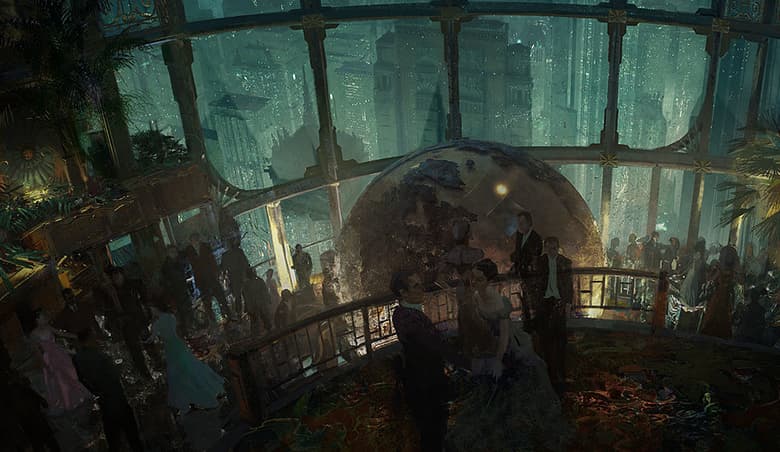 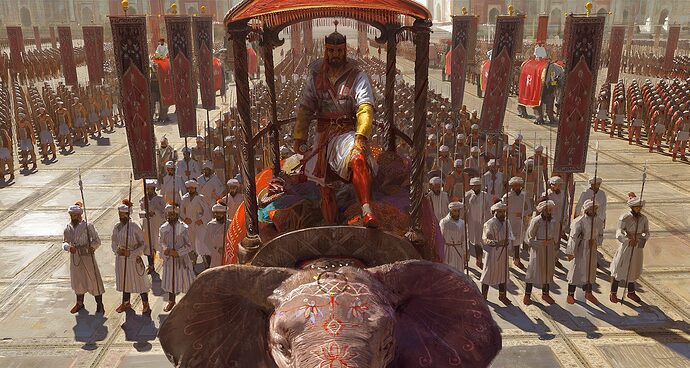 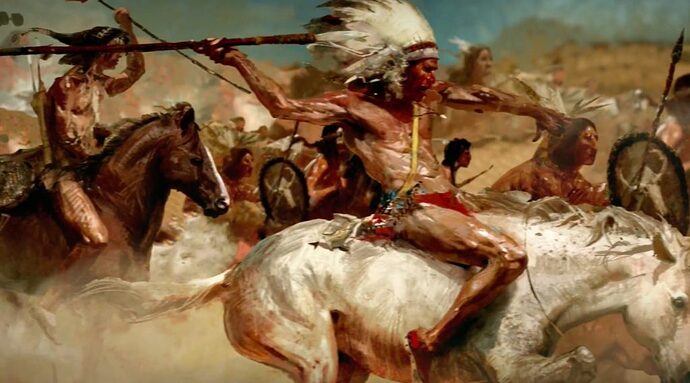 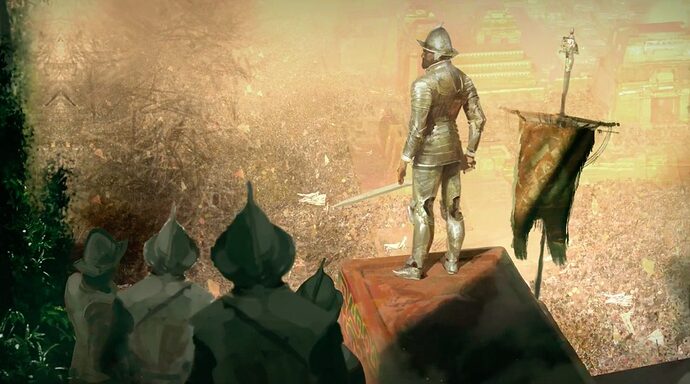 After playing beta, I am loving it so much, all my previous posts about units looking like plastic is irrelevant now. I have been a critic on the artstyle of AOE 4 and even called a mobile game, but I am taking all of that back

The Artsyle is perfect, it has a soft soothing nature to it, the units are a bit low poly but based on feedback i am confident devs will give better graphics options for people with better rigs.

AOE4 artsytle is dope AF and fits the game perfectly, all my worries about details and readability is gone.

AOE 4 is gonna be one of the best RTS to come in a long long time and I can’t wait for everyone to play and see what I have experienced.

Yes and no, or rather ‘yes and it’s complicated’

Craig is a great artist, I’ve had his works set as wallpapers many times in past years.

Yes the game is inspired by this and is doing a decent job, but when it comes to criticism from what I can see - only a minority of posters despise stylized visuals and general tone, color palettes etc.
Most of the complaints concern the technical side of the game - quality and detail of models, textures, some tech behind water, ragdoll or destruction.
And on top of that (I think Americans call it like that) ‘bang for the buck’ factor

Microsoft or not, Covid or not, it’s not a 40$ game, nor Age of Empires is some obscure brand.

Look at one of the better RTS games in recent years- Anno 1800. But even things from a smaller team like 11bit’s Frostpunk:
Frostpunk part 1 | LIVE walkthrough no commentary (PC gameplay) - YouTube

I’d be happier with people nailed to trees, dark and grey mossy cobblestone all around, but I like this too and if his work could be magically turned into game AoE IV would won all possible awards in that year

You can have things stylized and lush and rich at the same time. Game has aged a bit but when it came out 2010 Settlers 7 did a decent job delivering rather impressive stylized visuals: 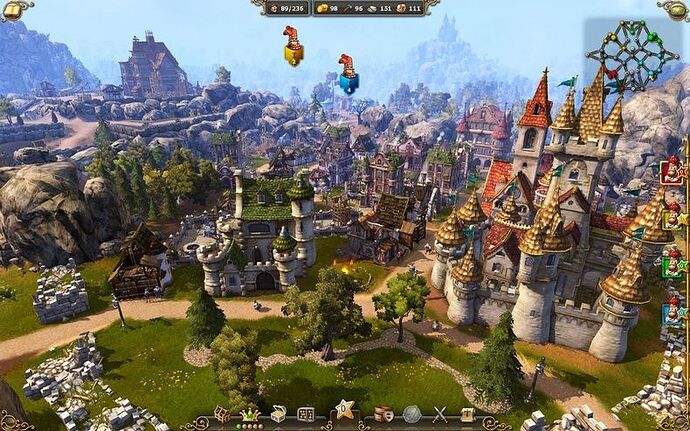 Settler is cartoon so much

Its true he is one of the OGs of the art industry.
I regret not buying the art pack that comes with the preorder in some ways.

He has a very unique painting style that is both realistic and impressionistic. Its great. 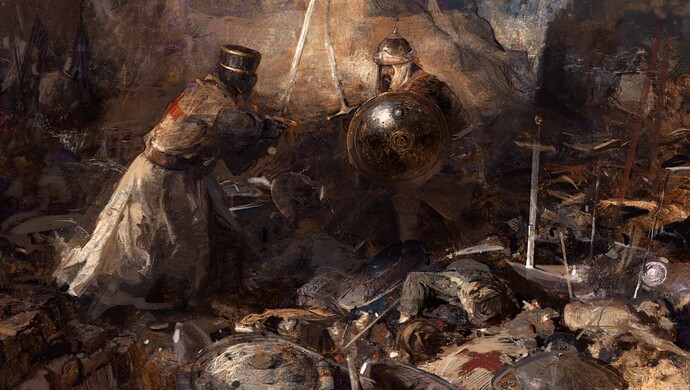 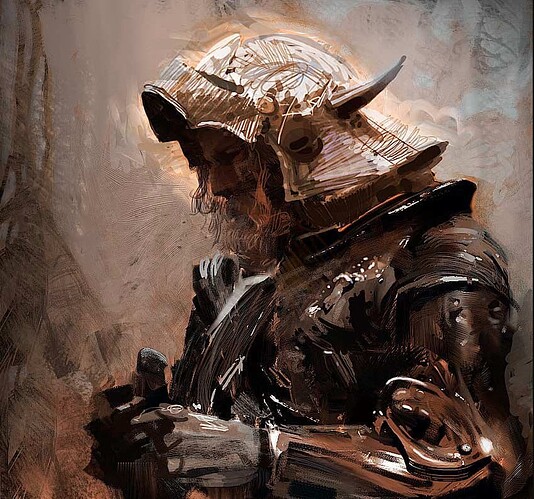 If only the game looked half as good as his art…

have you been beta tester , because if you didint was , you just cant know how the game looks at this point

There are tons of trailers out there. But what is the point of bringing these trailers?
Even they are not stylized nowhere near as much to safely say that IV’s art style follows closely work of Mr. Craig. In other words- what does watching these trailers should communicate? Is the game inspired by his work? Well, yeah, of course. And?

It’s one thing to create thread about him so more people can appreciate his work, it’s a completely different thing to say:
The Artsyle is perfect
AOE4 artsytle is dope AF
AOE 4 is gonna be one of the best RTS to come in a long long time (because of that art style?!)

and use his 2d paintings as an argument. And trailers- they look good but they are trailers, and even watching them you can see poor shadow tech, blurry and/or simplistic textures, subpar models for new game.

General tone, character and personality of what’s delivered is established well and one can safely say Devs are taking notes.
Game can be picturesque at times and is very pleasant to look at, but what’s the bottom line- AoE IV looks just like his paintings?
Honestly Dishonored series would be closer and that’s the best compliment I can give both

More often than not his work includes a crazy amount of detail, vibrancy, contrast, movement and fluidity, expressiveness. In-game unit models, props, even some buildings look more like stylized and simplified pawns from a game like ‘Hitman GO’, than a transition of his work into a game’s code.

Leaving tech aside- I wish Devs could be less restrained, got rid of their fears, imposed restrictions and went all the way to deliver more expressive , unconventional visual setting

have you been beta tester , because if you didint was , you just cant know how the game looks at this point

@JjForcebreaker im replying to his post. Thats why im bringing up the trailer. Im explaining how anyone could know how the game looks.

I was responding to the another guy xd , yeah but trailers looks SO MUCH DIFFERENT , for me beta looks awesome

for the purposes of the NDA I am only giving my opinion based on the public trailers and gameplay we have been shown
the game does not look as good as a 2021 rts should, and the scale is way off.

you are showing us works of AOE3 for the most part, one of Rapture, and another of starwars, of course they are impressive but, what do they have to do with AOE4???

On the other hand, you can be critical of aesthetics, graphics or whatever and you can also like the game, I have played little to the beta, 20 hs, and I can tell you that although I criticize many things, such as the lack of artistic identity of the game, I have also enjoyed it and I liked aspects.

I really share the interest and enthusiasm for Mullins’ work, as an artist I admire him too much, it’s too great. His AOE3 paintings are unmatched. But of AOE4 there is at least one wallpaper…

I want to point out that this is a really talented designer and I really liked his work with the AoE 4 design.
Let’s see what will happen on release, since the game has not yet been completed to the end and all feedback from beta testers has not been taken into account, so we are waiting for the release.
I have no doubt that the game will have at least a good start and a long future.

Im not sure about his particular participation in the Aoe franchise (whether it be illustration, concept art, or both). I feel his role is more conceptualizing the feel/tone of the game or setting rather than actual ingame visuals. So it would be wrong to compare his paintings to the games.(every aoe game fails by that metric)

But I will say that claiming artistic representation not making 100% conversion to 3d models is just how the industry works. If you’ve looked at concept art in general you’d find the paintings/drawings tend to have a lot more character than the ingame models. Or somewhere along the line designs changed drastically. (art direction) 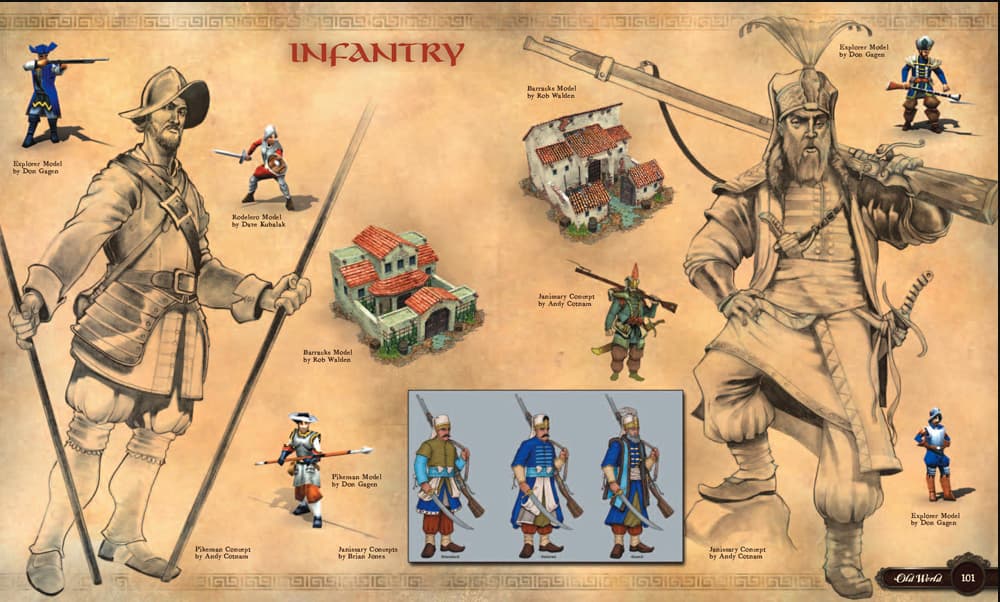 you are showing us works of AOE3 for the most part

In many regards the ingame models made after these drawings are pale representations of what the artist intended. Because there are technical constraints down the line that influence that. In a lot of ways they can be considered to be “low quality”.

But of AOE4 there is at least one wallpaper

yeah unfortunately we won’t see much art until the game is released with the “art pack”.

yes his art is more for direction and inspiration, this is why AOE 4 has a water colour type textures.

Those who have confusion on artstyle…

At this point I’m fairly convinced all the “art” people are just trying to convince themselves more than anyone else.

No, with every new trailer released we see that the game looks nothing like the art, and watching all this amazing artwork has made me depressed thinking about how the game could have looked if the game designers took any inspiration from it. lol at “water color type textures”, the word you are looking for is “muddy”.

If you want an example of a game’s art style that actually does reflect amazing concept art then might I suggest looking at, little known indie developer, Relic’s own Homeworld. 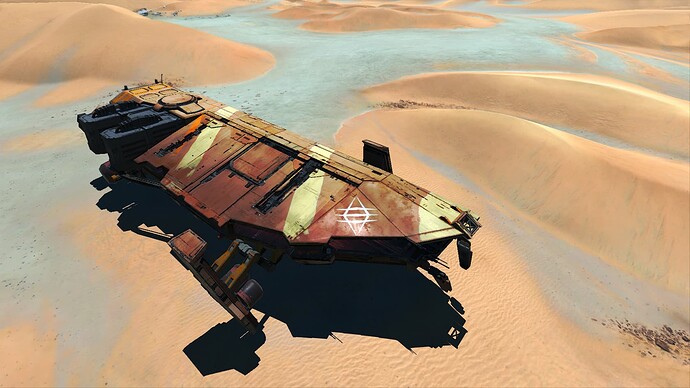 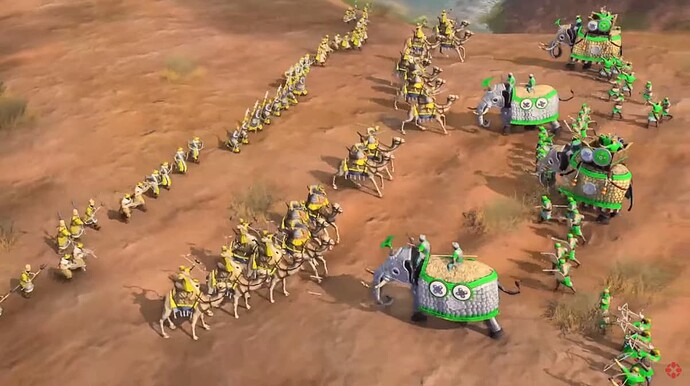 this comparison is not fair, besides art is a subjective conception. The art, the beauty, those things are subjective, there are representative canons but one may not adhere to them, but it has to do with the subjectivity of each one. Now, with technical quality, that’s another thing.

if you look at those concepts that @BossPaprika1647 shared, they have a naturalistic quality, but more cartoonish, and the final models compared to the side, too. They are from AOE3, as far as I’m concerned I never felt that about AOE3, the cartoon vibe, never, it’s a game that nowadays leaves me amazed to see and play

@TheFibrewire What I meant is that Mullins is an artist who has made promotionals for the franchise, especially the original AOE3. They are beautiful paintings of a lot of quality and details, I guess he has made some for the DE versions as well. We don’t know if he’s involved in the creative process of the game, if he influences the process or not. We don’t know.

the promotional video for AOE4, is a collection of promotional paintings by Mullins(from AOEI II III DE)…

I’ll Simply Say that there are many concerns about graphic.

Sasha Beliaev, another very talented digital artist and who used to work for Relic, made pre-producrion concept art for Age of Empires 4. This one titled “Age of Empires Reboot (pre-pro), Microsoft” dates from 2016:

That is a fair opinion actually , in my case I was playing the game on Max and I love it , it feels GREAT (for me)

But at the end of the day it’s only opinions and what it matters is the gameplay. Don’t say what do you think about it because you maybe broke the NDA