The “Celebrating the Ages” task of “Train Ten Camel Riders” is not registering as completed for players that build ten (or more) camel riders, heavy camel riders, or imperial camel riders, thus rendering the event stuck on this challenge and unable to be skipped/returned to later.

The event challenge of building ten camel riders should be complete, unlocking the cameleon cheat, and allowing for the event to progress to the next challenge.

Just train Camel Riders, not heavy or imperial.
You try set up a game starting in Castle with high resources and on Turbo mode for faster finish. Train 10 Camels and quit. That should work I believe.

I have tried that multiple times. In three games I even played long enough to make approximately 100 of them through ten stables.

I am having the same issue as well. I trained specifically Camel Riders and I did not complete the challenge

That’s unfortunate. As I just obtained it yesterday. It’s weird if just for some people.

Yes, having the same problem. I set up a normal skirmish and did it, but it did not register. So I tried using the “Let’s Go” way as well, still nothing.

Have you unlocked the challenge by completing the previous ones and waiting for cooldown to complete?

Yes. I have not had this problem before while playing the other events. I even tried signing out of xbox live and signing back in and completing the challenge but still it is not recognised. Even picked a different civ

Oh well, I will try again in a few days, still about 2 weeks left in the event.

It’s a pain. I have already had a few times where I trained normal camels in a game without getting it, and then yesterday I completed the challenge after a game, but when I started the game again today, I had to do it again and now I have to wait for the countdown again for the next challenge.

I just watch my friend did it again. He set a Random Map starting in Castle Age, make Stable and train 10 Camels.
But make sure you completed previous challenges and waited for the countdown to completed before attempting. If it was a bug then everyone would’ve encountered, so I don’t think it is.

Absolutely! I do them daily at different times depending on my schedule. It’s JUST this one. I’ve tried it with every single camel rider accessible civ too.

A lot of us have encountered it no matter the settings.

Bugs do not have to be encountered by everyone…

Hello everyone, I just got my achievement today. I won’t lie I tried 4 times but this one came with the result.

I will tell you guys what I exaclty did with all the details possible:

Hope you guys get the achievement. 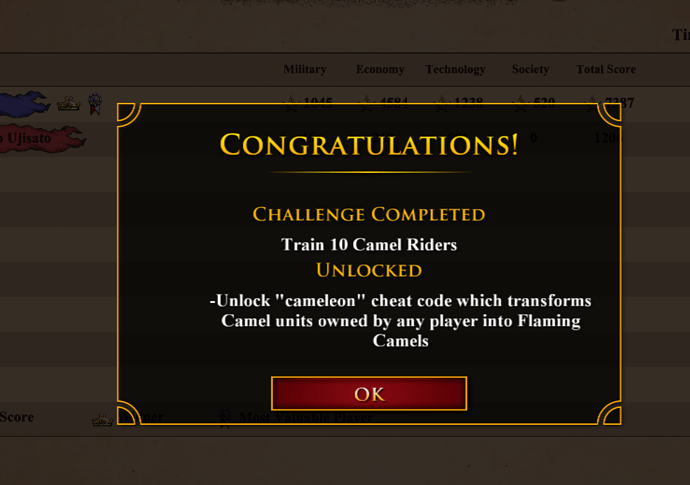 Also had to do this several times. First used post imp setting → had heavy camel, therefore didnt work
Then second test was Dark Age start, but using infinite ress and aegis cheat code, this time no heavy camel, but normal camels → again did not work (guess bc of using cheats?)
Then final try was the default settings (of lets go button), but with DEBUGSPEEDS enabled 8 times gamespeed (so it goes by faster…) with normal ress and dark age start.

They should clearly better clarify how the goal should be reached…

I picked Berbers on 4v4 Nomad (vs AI) and trained 15 camel riders and around 60 camel archers (obvious win condition). finished the game in a normal way and it worked the first time I played.

I managed to finish the challenge as well. It took a few tries due to not knowing it didn’t apply to Heavy Camels and my first try was a post imperial DM with Indians using Imperial Camels (ouch).

Firstly, as mentioned above, if you train Heavy or Imperial Camels it doesn’t count.
Secondly, if you train 10 Camel Riders and upgrade them to Heavy Camels, it will also not work.

As mentioned above, start in Castle Age and just rush the AI with regular Camels and you should be fine.

Thank you. This worked. Though I did change one thing from my previous tries - when they abdicated and it brought up victorious I selected back to map, then went to the menu and quit the current game. Not sure if it mattered, but thank you for this recommendation!