A text in the “Historia” menu (“History” in English), is displayed incorrectly as “Evolution del castillo” instead of “Evolución del castillo”. 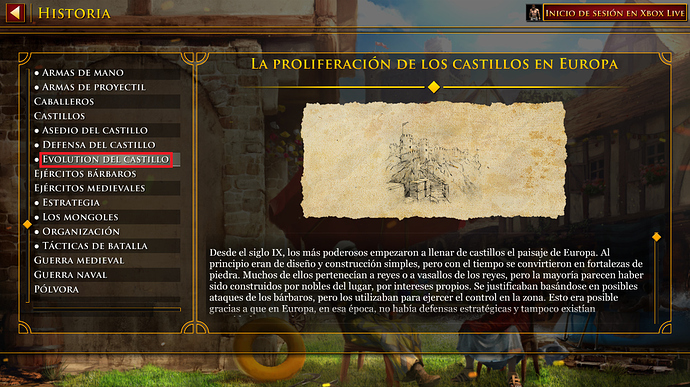 In Spanish (Spain). The “Tours” Historical Battle’s description has Viajes as a title, as shown in the attached capture. It seems to be a literal translation of the English word “tours”. It should read “Tours”, as it is the name of a Fench city. 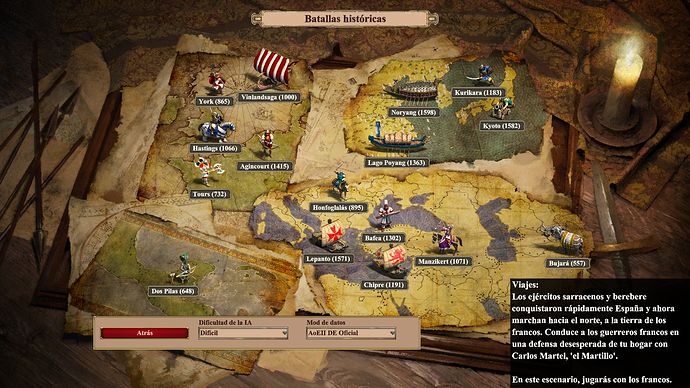 In Spanish (Spain), the names of the knight line have been changed in the Definitive Edition, and I believe they’re now both wrong and confusing. I will explain.

Traditionally, the names for these units have been Jinete -> Caballero -> Paladín. “Jinete” is a beautiful Spanish word with berber roots (remember “genitour”?), that has been used since the Middle Ages to refer to horsemen. It is just a very appropriate word, and it’s what the unit has been known as since the original AoK.

Currently the names of these units are Caballero -> Cavalier -> Paladín. This means that the name traditionally used for the first-upgrade unit is now used to refer to the base Castle Age unit. Also, the term “Cavalier” a) does not exist in Spanish, b) literally translates as “caballero”, a word already in use. All in all, I think the previous naming system was objectively better, apart from it being the one we’re all used to.

I attach the problems I’ve found with the European Spanish Translation. Most of them are mixed audios in the campaings.

ISSUE There are some problems with the audios that play during Historical Battles: -Bukhara’s ones are all mixed up with the Kurikara battle ones. -Kurikara’s audios belong to Lake Poyang scenario. -Lake Poyang ones belong to the Latin American Spanish translation. -Dos Pilas audio plays in York battle. -In Dos Pilas, Bukhara’s audios play instead. Th…