I was wondering why there isn’t a naval unit that costs only food and wood so as to be mass produced in late game? How will it affect the balance?

Hey, Italians can have a gondola. Then you can put a male villager and a female villager on it and take them for a ride through the tunnel of love.

What about “melee galleys”? Like the ones used for boarding in the mediterranean.
It would have no range, would have melee attack and melee armor, but small pierce armor. Could be very weak vs demos and galleons, and kinda meh vs fire galleys.
Perhaps it could be used to remove the focus from fire ships in the very early game - the first to train 2 fire galleys in feudal has uncontested naval control if the momentum is kept - if it gets a sort of bonus.
The weakness to demos could make then less of a meme unit.

No idea about stats, or price, tho. And i support no ramming btw, if anyone is interested.

What about some canoe units for raiding fisheries? We also have some nice editor graphics that can be used.

don’t know if canoes makes a lot of sense considering the civs, but a reskin of then could work too

It’s not gold that you run out of in water maps, it’s wood. In that sense, there’s no sense in having a ship that doesn’t cost gold. Gold is never an issue.

Ah, the balance god. And since boats can’t be made of anything other than wood - in the game context - we find ourselves in a tough spot for trash boats.

who said it has to be a ship?

i say we get doplhins and turtles and whales and giant squids… costing food and a wee bit of gold… and all do melee damage.

who said it has to be a ship?

i say we get doplhins and turtles and whales and giant squids… costing food and a wee bit of gold… and all do melee damage.

My vote goes to training Sharks.

You guys want to mass produce shark/dolphin in late game???

[need to add some more characters]

You could mass produce fishing boats/transport ships as meat shields for your warships, while conserving gold…

we find ourselves in a tough spot for trash boats.

Ah, but there’s one in the scenario editor. It’s even called a “junk” 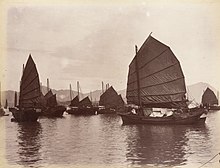 A junk is a type of Chinese sailing ship. They were developed during the Song dynasty (960–1279) based on Austronesian ship designs which have been trading with the Eastern Han dynasty since the 2nd century AD. They continued to evolve in the later dynasties, and were predominantly used by Chinese traders throughout Southeast Asia. They were found, and in lesser numbers are still found, throughout Southeast Asia and India, but primarily in China. Found more broadly today is a growing number The t...

Or add the option like in AOE Online to be able to repair your fleet using a few of your fishing ships which would save you resources against replenishing.